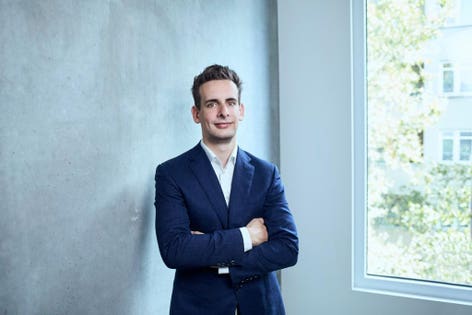 Co-living is becoming one of the world’s most popular forms of urban housing, particularly for single millennials and those who travel for work. Among those leading the trend is a 34-year-old entrepreneur from a small town in Germany with no background in real estate or finance, or even college degree.

Gunther Schmidt is the founder and CEO of Quarters, which has 1,850 units in 12 cities across three countries, including 111 between 324 Grand and 629 E. Fifth streets in Manhattan. Rents for rooms in New York City start at $1,599 per month.

Meanwhile, from December 2018 to January of this year, Schmidt and his business partner, Michael Ambros, raised another $1.1 billion from Corestate Capital Holding SA in Europe, along with $300 million from W5 Group in the United States. They plan to put the money toward another 10,000 spaces on the two continents, with 84 slated to open later this year at 1190 Fulton St. in Bedford-Stuyvesant, Brooklyn.

The company currently has 1,850 units in 12 cities across three countries.

Quarters will be the biggest name in co-living on the planet, Schmidt recently told Forbes. His path to running what he calls the WeWork of shared living space, however, started with a clever idea when he was just 14 years old. While living in Burgbernheim, about an hour west of Nuremberg, he decided to buy salami sausages from a nearby factory and sell them online. He saved money from an after-school job and convinced his parents to drive him to the plant, where he purchased 100 packs of meat to resell for a marked-up price on eBay.

His scheme worked well for a while, with Schmidt receiving consistent five-star reviews from happy customers, until the owner of the factory caught on and forced him to stop. “So back then I learned, OK, you have to look in all the directions [of a business] and see the potential risks and how to navigate them, and how to build it up in a sustainable way, and how to build long term value,” recalled Schmidt, now 34.

“Honestly back then I did not see myself as an entrepreneur because I didn’t know what that is,” he added. “I was just a kid playing around.”

Speaking of playing, Schmidt was also a musician in his town band, where he befriended Ambros while performing in an Oktoberfest beer tent. When he was 18 in the early 2000s, instead of heading to a university with his classmates, Schmidt, together with Ambros, enlisted help from a local computer whiz and launched a search engine to aggregate websites that offered free text messages. The site eventually attracted 100,000 visitors per month, spurring the duo to capitalize on the traffic through advertising. Before long, they earned their first $1 million.

After attempting to buy a television online, like a typical 20-something year old would do with such a big paycheck, only to have it never arrive in the mail, Schmidt had his next epiphany. To help others avoid shopping from deceptive e-commerce sources, in 2008 Schmidt and Ambros launched eKomi, which has since become one of Europe’s largest transaction-based review and rating sites and is now backed by Goldman Sachs.

Quarters has two locations in Manhattan and plans to launch in Brooklyn this year.

They launched the company in Berlin, but found that the city offered a limited pool of talent. To help attract employees from around the world, Schmidt and Ambros offered rooms in an apartment to anyone willing to relocate.

Since the term co-living wasn’t yet coined, “we called it social living,” based on “social network,” Schmidt said. “I would tell new candidates, ‘you can start tomorrow morning, just bring your suitcase because everything else is already taken care of.’”

Their flats offered furnished rooms, free WiFi and Netflix, along with like-minded peers to spend time with. “We figured we could create real value in putting people who were in the same exact situation together,” Schmidt said. “People have so many connections on social media, but no real connections anymore.” The housing concept was so popular among their employees that by 2012 it had turned into their next business.

When asked where they learned how to secure such large-scale investments from big-name backers, Schmidt replied that he and Ambros, “just talked to a lot of people.” Quarters, for example, has 10,000 members resulting in an occupancy rate of 96%, proving a reliable track record, he said. “Real estate people are really conservative, they don’t jump for the new, fancy things,” he explained. “For them, it’s really important that something really works.”

His company has plenty of competitors, such as The Collective, another millennial-run venture which in October announced plans to build a $450 million, 350,000-square-foot complex in Brooklyn, but Schmidt said Quarters doesn’t need to be the only co-living provider on earth – just the biggest.

“People talk a lot about announcements,” he said, “but we are the only guys that have sites in Europe and sites in the U.S.”

Mortgage refinancing is hot, but using your home as an ATM is not
Five Issues New York City Must Address To Reinvigorate Itself.
Stocks making the biggest moves midday: Amazon, Tesla, AstraZeneca, Carnival & more
7 Ways To Reduce Anxiety In The Home Through Design
Municipal yields stay put amid sideways trading