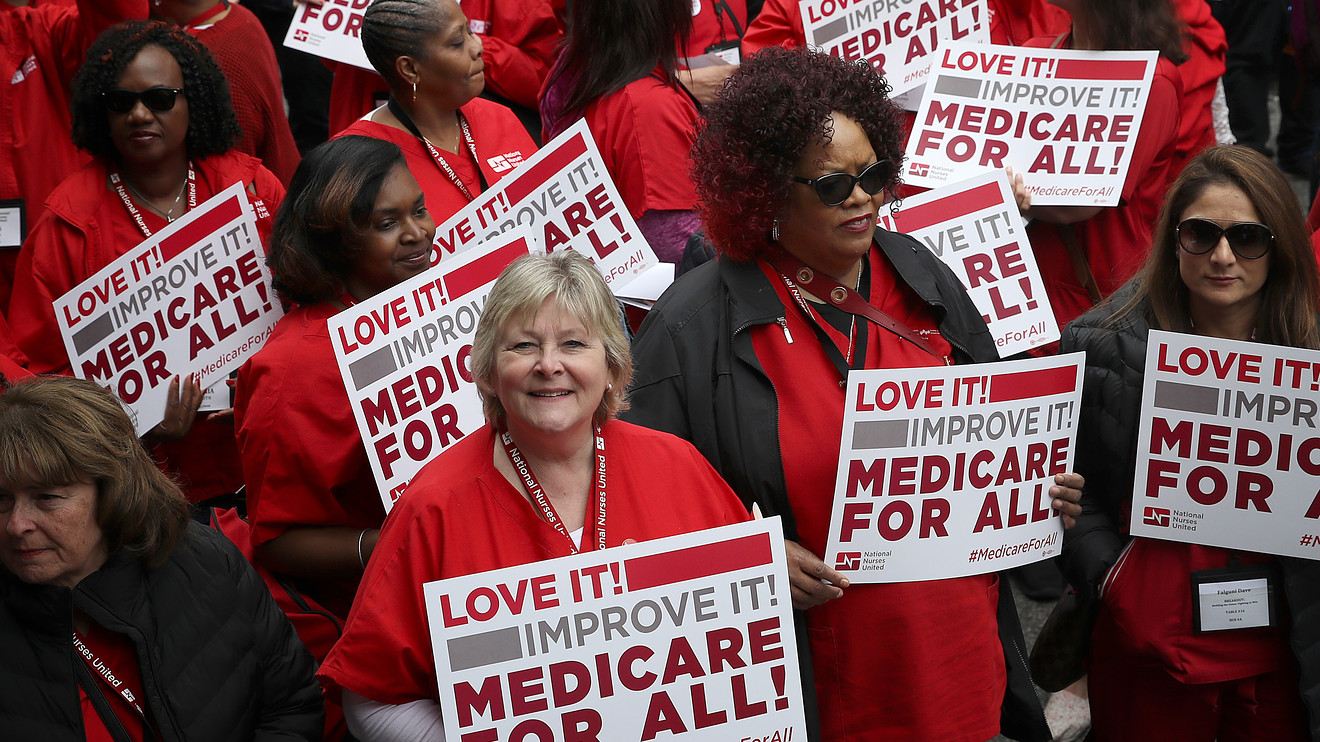 Investors in health-care stocks could be forgiven for asking: “What rally?” While the Dow Jones Industrial Average and the S&P 500 index have both soared more than 20% from their Christmas Eve lows, health-care stocks have gained less than half as much.

Behind health-care stocks’ underperformance is sheer panic at the emergence of Democratic presidential candidates like Senators Bernie Sanders, Elizabeth Warren and Kamala Harris, all of whom have called for some form of “Medicare for All” that would replace private medical insurance with single-payer coverage from the U.S. government. Last month, health-care stocks lost $150 billion in market value in just four trading days.

To me, this is a classic case of investors’ political biases getting the better of them, because a close analysis shows there’s almost no chance of such legislation being enacted. That’s why I believe this is a great opportunity to buy health care, one of the market’s best sectors, at an attractive price.

Forget the cost of Sanders’ Medicare for All program. Both the conservative Mercatus Center and the left-of-center Tax Policy Center have pegged it at $32 trillion over a decade but politicians and voters have repeatedly shown they don’t give a damn about deficits or debt. And set aside the inconvenient fact that Medicare for All would replace popular private health-insurance plans for 180 million working Americans.

No, the real problem is political: Democrats are unlikely to win a Senate majority in 2020 that is large enough to push such sweeping legislation through. Even if they did, the opposition from powerful lobbying groups would be enough to stop it in its tracks.

Read: First hearing on ‘Medicare for All’ reveals caution on the issue from Pelosi and House Democrats

Remember when Democrats in 2009 passed the Affordable Care Act (also known as Obamacare), they very briefly had a 60-vote Senate supermajority that helped them break any filibuster. And it took backroom deals (including scuttling the so-called “public option”) with Sens. Joe Lieberman and Ben Nelson to get the votes it needed to pass.

Right now, Republicans control the Senate 53-47, and even though they’re defending a lot more seats than Democrats are next year, a 60-seat Democratic sweep in 2020 will get you longer odds in Vegas than the Miami Marlins or Baltimore Orioles winning the World Series.

In fact, even a straight-up Democratic majority in 2020 would be a heavy lift, because as Nate Silver’s FiveThirtyEight lays out, Democrats need to flip at least three and maybe four Senate seats (if Doug Jones doesn’t get re-elected in Alabama) to even reach 50. And many seats held by Republicans are in deep, deep red states where Democrats’ chances of victory are almost nonexistent.

A Republican-controlled Senate would prevent Medicare for All from even getting a vote. But let’s assume the Democrats win a slim majority and a President Bernie tries to ram through Medicare for All. Again, one of the reasons the ACA passed was that President Obama lined up the support (or at least neutrality) of powerful interest groups that in the past had opposed health-care reform: the American Medical Association, Big Pharma, the American Hospital Association and health insurers. According to OpenSecrets.org, the health-care industry made federal campaign contributions of $225 million and spent $563 million on lobbying in 2018. That buys a lot of politicians.

Count on these groups to call in all their chits if the threat of Medicare for All becomes serious.

Remember back in 1993 when Bill and Hillary Clinton were trying to re-engineer health care with a plan that included basic universal health-care coverage and health insurance reform? Health insurers declared war, unleashing a popular TV ad campaign featuring Harry and Louise, an upper-middle-class couple, that killed public support for the bill.

Imagine, then, the reaction to Medicare for All, which could mean the end of private health insurance and could cost hospitals billions of dollars in lost reimbursements. It would make Harry and Louise look like Bert and Ernie of “Sesame Street.”

That’s why if I were you, Bernie bros, I wouldn’t count on getting Medicare at 30—or spending that five-figure student-loan balance you’re expecting taxpayers to repay, for that matter. That’s also why health-care investors should stop worrying and start buying with both fists.

Since the beginning of the bull market in March 2009, the Health Care Sector SPDR ETF has gained 307%, slightly trailing the S&P 500’s 335% advance. But the Invesco S&P 500 Equal Weight Health Care ETF

catapulted 461% over that time. I love equal-weight ETFs, that Invesco ETF is one of my favorite investments in the universe, and I plan to buy more in the days after this column runs.

Howard R. Gold is a MarketWatch columnist and a long-term investor in the Invesco S&P 500 Equal Weight Health Care ETF. Follow him on Twitter @howardrgold.