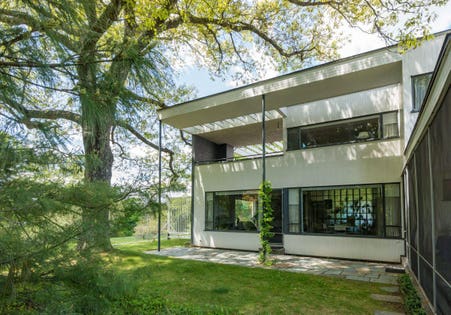 A small modernist masterpiece, the Gropius House stands in a grassy location in Lincoln, Massachusetts, outside Boston.

Walter Gropius founded the Bauhaus in Weimar, Germany in 1919 as a school that blurred the lines between fine and applied art. It held that all the arts, including architecture, should play their part in a harmonious whole. Literally translated as “building house,” the Bauhaus eschewed ornamentation with radically simplified forms and held that mass production was not at odds with individual artistic expression. When we visualize the best of Modernism today, we see the ideals of the Bauhaus.

The Bauhaus moved from Weimar to Dessau in 1923, but the National Socialist German Workers’ Party (the Nazi Party) was becoming more influential in German politics. When it gained control of the Dessau city council, it moved to close the school. The Nazis held that the Bauhaus was a hotbed of communist intellectualism and said that its flat roofs and modernist styles were “un-German.” Though the school moved to Berlin in 1932, it closed soon thereafter.

Walter Gropius, who left Germany to set up an architectural practice in London, moved to the United States when he became a professor of architecture at Harvard University’s Graduate School of Design in 1937. He built a family home on a verdant piece of land in Lincoln, Massachusetts, a house that stands today as a museum open to the public.

The dining room at the Gropius House shows its warm intimacy and historic Bauhaus furnishings.

Though modest in scale, the home’s impact is huge. It combines traditional elements of New England architecture like wood, brick and fieldstone with innovative materials including glass block, acoustical plaster, chrome banisters and the latest technology in fixtures. It features furniture designed by Marcel Breuer, fabricated in Bauhaus workshops. There are also works by Eero Saarinen, Joan Miró, and Herbert Bayer. A rare historic house where the family’s possessions are still in place, Gropius House today has a sense of immediacy and intimacy, and has a collection of Bauhaus-related materials that is unparalleled outside Germany. In 2000, the house was designated a National Historic Landmark.

In honor of the Bauhaus Centennial of 2019, Historic New England launched a Gropius web app and is sponsoring a number of tours and events. In partnership with Shacksbury, a Vermont cider producer, a Gropius House Cider is on tap.

Square and PayPal may be the new whales in the crypto market as clients flock to buy bitcoin
McConnell sets up vote on Waller as Shelton’s Fed fate in limbo
S&P’s decision to add Tesla in one shot demonstrates the power of passive investing
Here’s The “2020 State Of The American Renter Report” From Zumper.com
Op-ed: How pro investors are adapting to the influx of quick-triggered, app-using market players