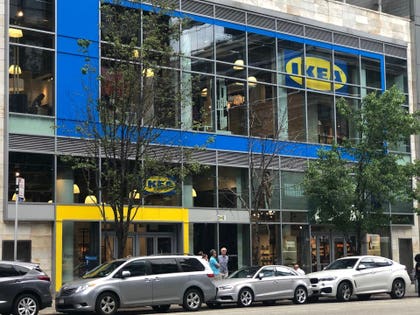 Accessible it is for Karima Rustin, a 42-year-old real estate agent who lives in Harlem. A month and a half after the store replaced what was once an Urban Outfitters store and opened right across from Bloomingdale’s flagship department store in a busy commercial section of New York, Rustin decided to check it out on Monday instead of making the usual trek all the way to Brooklyn, where Ikea’s mega store is.

“I definitely see the value of having a store like this in Manhattan,” she said. “I do like the fact if I want to see something I can come here instead of going all the way to Brooklyn. It gives people an idea of how to visualize something. You can see how you can set up a room. It has a lot to offer.”

Rustin wasn’t alone. She was a steady stream of consumers who showed up at the location on Monday to check out how they could set up a living room, a kitchen or a bedroom space or take in how Ikea designs a 400-sq-foot apartment or a 333-sq-foot living space with a bathtub in the midst. At the basement floor of the three-story space, separate sitting areas are set up for free design consultation appointments.

But if you see and want to buy a $9.99 shower curtain or a $4.99 octopus-shaped hanging dryer on the spot? You are out of luck. You will still need to travel all the way to a regular mega store or order online and pay for a shipping fee. That’s not to mention at a time when Amazon, Walmart and other retailers are eager to compete on different free shipping offers, IKEA charges at least $9.99 for delivery, according to its website.

Meanwhile, none of the traces of the regular IKEA chain’s famous discount restaurants or Swedish food items could be found either at the location.

As IKEA vies with increased competition, especially that  from Amazon and other online sellers, the smaller Planning Studio is one way to help it attract more urban-area consumers, in a similar playbook also adopted by Target and other big-box retailers that have opened their own smaller city format concepts. It also may help IKEA increase online sales.

While the company’s annual report showed its global online sales jumped 45%, outpacing the 4.7% total constant-currency retail sales in the year through August, IKEA has trailed its retail peers in online share. For instance, Rakuten Intelligence data showed IKEA had only a 1.6% share of the online bed and mattress market in the U.S. through March, compared to Amazon’s 32%, which included all orders on its site. Costco had a 4.3% share while Walmart garnered 3.2%.

IKEA has said the Planning Studio, with a focus on urban living and small spaces, will give “customers the opportunity to discover, select and order” its products. The company said it’s also planning to enter other major U.S. city centers including Los Angeles, San Francisco, Chicago and Washington, D.C.

The U.S. is the company’s second largest selling market after Germany.

However, as much as the store is a smart way to extend reach to time-starved consumers and potentially drive sales, IKEA, which said the store was designed with input from New Yorkers, may also do well to factor into this crucial part about brick-and-mortar retail: instant gratification and impulse purchase.

“I saw some baskets that were really cute and I saw how they looked in the kitchen” area, and I want to purchase now,” Rustin told me, adding as a renter like many other New Yorkers, she doesn’t have need for remodeling projects. “For small stuff like bath and kitchen accessories, it would be really convenient if you can purchase right now versus having to order and pay for shipping.”

She wished that she had made that trip to the Brooklyn store after all.

Related on Forbes: Casper wants to be more than a mattress company

Related on Forbes: Why Amazon is making one-day prime shipping the new norm