Stocks have been rallying hard on the idea the Federal Reserve will cut interest rates soon, but at some point the market needs to see progress on the trade wars and economic weakness that are bothering the Fed.

Friday’s surprisingly soft May jobs report showed just 75,000 jobs created, 100,000 less than expected. That immediately raised expectations that the Fed could cut rates as early as July because the long resilient labor market is now seeing the impact of what has already been showing up in manufacturing data.

The stumble in the labor market raises concerns that trade-related weakness in manufacturing will creep into other sectors of the economy. For that reason, economic data, particularly CPI inflation data Wednesday, could be a key market factor in the week ahead, as investors attempt to game when the Fed could cut rates. There are also retail sales and industrial production on Friday.

“I think investors will be nervous around trade and tariffs. Those will continue to drive sentiment next week. I think it’s interesting that you have this idea that the ‘Powell put,’ the central banks come in to save the day,” said Michael Arone, chief investment strategist at State Street Global Advisors. “It may feel good for investors, and it may extend the cycle longer, but I do think it compounds the longer term problems…Eventually this is going to catch up with the market in some way or other.”

Investors are awaiting any developments in China, U.S. trade relations, and they are also closely watching developments with Mexico. President Donald Trump has threatened tariffs of 25% on all Mexican goods, starting with a 5% tariff on Monday, if Mexico does not show that it is making progress in stopping migrants from reaching the U.S. On Friday, Trump said in a tweet there’s a good chance a deal will be made with Mexico.

“The market was shrugging it off this week. It’s been a strong week for the market, so [investors] seems to be taking it in stride,” said Arone, noting investors were looking past the Mexican tariffs for now and focused on the Fed rate cuts. “The market seems to be applauding [rate cuts] right now, but I’m not sure accommodative monetary policy in itself is enough of a catalyst for better economic growth and better earnings. We need more than that. This could be a bit of a quick hit or a sugar high.”

Stocks rallied after the jobs report, with Friday’s gains capping what was already setting up to be the strongest week for stocks since November. Treasury yields fell to the lowest levels since December, 2017 in the past week, with the 10-year touching 2.05% on Friday. Fed funds futures also moved sharply, and were forecasting a 95% chance for a quarter point rate cut in July. 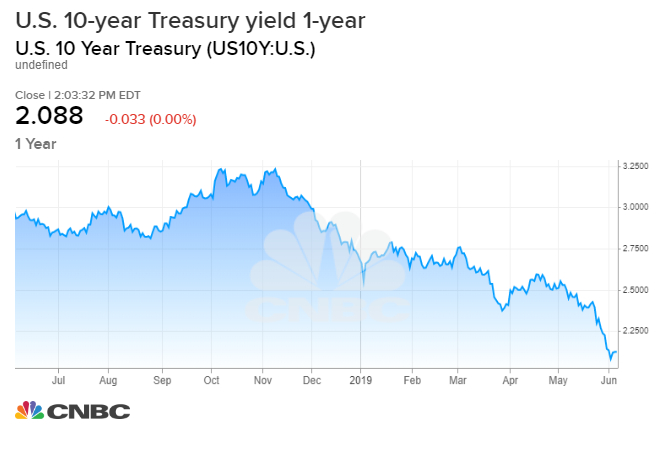 Jon Hill, rates strategist at BMO, said the markets are now focused on the timing of a possible Fed rate hike and whether the Fed would cut by a quarter point or a half point initially. That makes economic data especially important, as investors watch to see if weakness has spread to consumers, in the upcoming retail sales report Friday, or whether inflation is weakening. Core CPI has been running above the Fed’s 2% target.

“You would think the market is gravitating toward one cut in July, one cut in September and another in December. We have 2.9, 25 basis rate cuts priced in for 2019. This really raises the stakes for next week’s CPI, given core year over year CPI is over 2%, and also now because we’re in the Fed blackout period. There won’t be any additional guidance coming out of the Fed this week.,” said Hill. Fed officials do not speak publicly just ahead of meetings, and they are scheduled to meet June 18.

Strategists have said the market is also holding up on the idea that President Donald Trump would not allow the trade conflicts to get so out of hand that they will cause a stock market collapse, since he views the market as a reflection of his success. That’s the so-called ‘Trump put.’

Dubravko Lakos-Bujas, J.P. Morgan equity strategist, said if Trump proceeds with his threat to put tariffs on the remaining $300 billion in Chinese goods that could spark a major sell-off in stocks, and the S&P 500 could go as low as 2,500. But he also expects that sell-off would result in both a ‘Trump’ put and a Fed ‘put,’ meaning Trump would take some action and the Fed could cut rates to ease financial conditions and help the economy. The strategist said he is maintaining his 3,000 target on the S&P for the year.

“We believe the next round of tariffs that the Trump administration is threatening—Mexico 5% and China Phase III—could substantially increase the risk of pushing the U.S. business and profit cycle into an outright contraction,” he wrote. Lakos-Bujas said he still expects trade agreements to be reached, in part because the Trump administration will not want to risk a market collapse or recession, ahead of an election.

Lakos-Bujas said there are a wide range of possible outcomes, including a positive scenario where trade peace is achieved, earnings improve and the S&P shoots higher to 3,200.

In the coming week, investors will also be keeping an eye on China’s data. On Monday, China reports balance of trade, imports and exports, first quarter GDP, current account and foreign exchange reserves. Chinese inflation data is released on Wednesday.