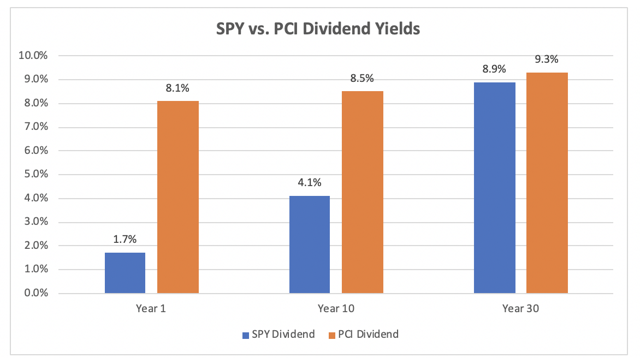 On November 14, 2017, I wrote a short blog post simply titled “Do Not Stop Buying PCI”. Since then, not only has the PIMCO Dynamic Credit Income Fund (PCI) outperformed any junk bond index you care to look at, but it has more than doubled versus the S&P 500’s performance since then. 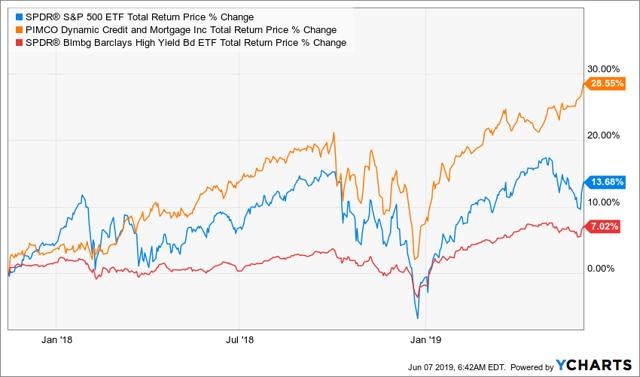 This is not surprising, as this has been PCI’s story for a very long time: strong performance alongside large, growing dividends: 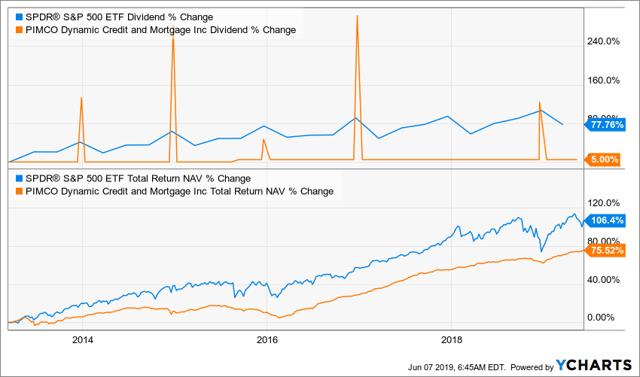 Note two things about these charts: SPY’s dividend growth is much greater, and PCI’s NAV performance since inception has underperformed the S&P 500.

Both of these issues have led many investors astray, causing them to ignore a phenomenal fund and lose outperformance as a result. Understanding these two issues in greater detail will also help us understand why investors aren’t buying into this fund as much as they should.

Dividend Growth, Off a Low Base, Isn’t Great Growth

While dividend growth is a good investment strategy for some people in some situations, it is important to remember that high yield investing not only provides bigger income right now, but sometimes it takes a long, long time for dividend growth to catch up with high yield alternatives. This is especially true if the base is low, as it is now. With the SPDR S&P 500 Trust ETF’s (SPY) 1.7% yield, in a decade its yield will be only 4.1% if it continues to grow at the rate dividends have grown in the last decade. Meanwhile, PCI’s dividend will be 8.5%, if we assume that it grows only 5% in the next decade (just as much as it has grown since its IPO in 2013): 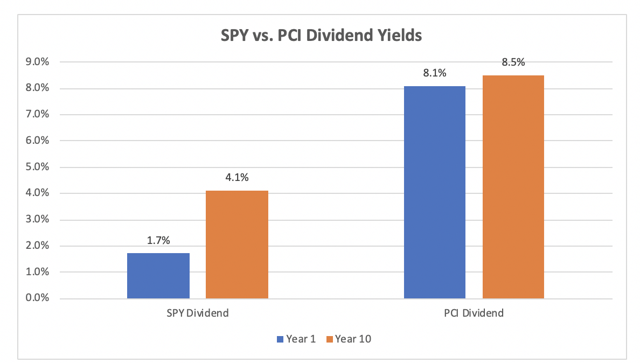 In fact, it takes about 30 years for SPY to reach PCI’s yield in Year 1, but by then, PCI’s much smaller growth rate (which I’m handicapping here) means that current investors’ yield on cost will still be higher:

Thus, the higher growth rate for SPY is not really a good thing, as it will take over a generation to catch up to PCI’s current yield.

PCI went IPO in January 2013 at the beginning of the Federal Reserve’s Quantitative Easing 3 program, which began in September 2012. I believe PIMCO launched the fund in response to that move as a way for investors to have a very specific type of exposure that would benefit from higher rates (the details of this, while interesting, are too complex to delve into here). PCI did not live up to this promise. 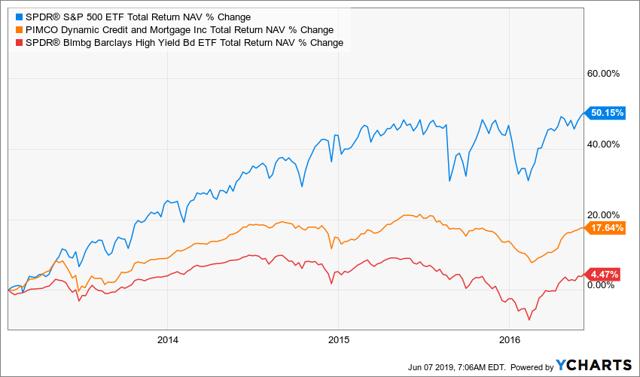 Although PCI did beat the junk bond index, it fell so far short of equities (which arguably benefited tremendously from QE3) that it had clearly not lived up to its purpose. As a result, the fund’s original premium (which it surely got at IPO largely because it was a PIMCO fund) quickly evaporated, and it traded at a discount — a rarity for PIMCO — while also trading at a discount that was quite high for a junk bond or bond derivative fund: 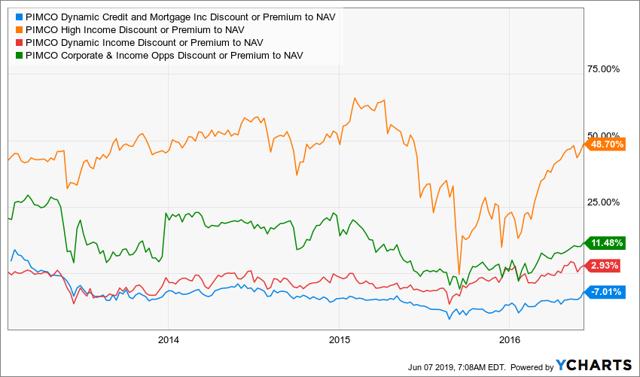 This was also when I made my first recommendation to buy PCI. The reason was very simple: PIMCO had seen its huge discount and responded by changing the fund’s mandate to be more in line with PIMCO Dynamic Income Fund (NYSE:PDI). At that point, PCI began to outperform on a NAV basis, and it has continued to do so until now: 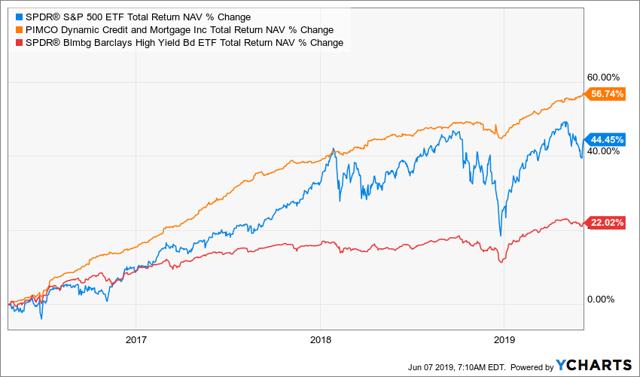 This has made PCI a buy-the-dip no-brainer since then, especially during panics like the one in 2017 that prompted my blog post. (I gave similar advice to CEF Insider readers in late 2018).

The market, however, is still underpricing PCI, giving it a very modest premium that frequently disappears, while being far smaller than PDI’s fund despite their near identical mandates: 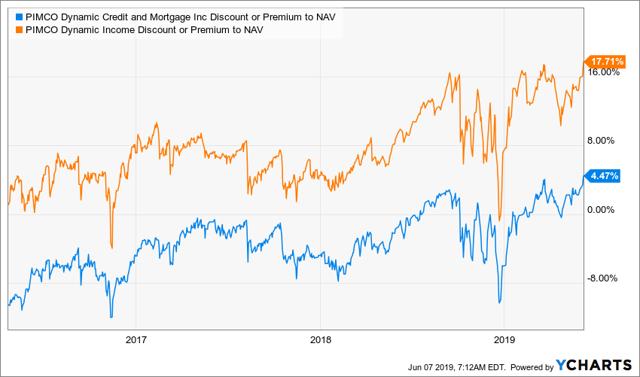 Buying PCI on lows and trimming positions on highs is an easy way both to get a huge income stream AND market outperformance.

So, Why Doesn’t Everyone Buy It?

With such a great fund, it’s easy to ask why everyone doesn’t buy PCI, and why even CEF investors and PIMCO fans, who have clearly broken free from the shackles of the passive indexing meme, have not priced a premium into PCI as they have done with PIMCO’s other funds and PCI’s sister fund, PDI.

There are, in my opinion, three mistakes that investors (and even some analysts) make when it comes to PCI:

The misunderstanding with PCI’s portfolio is in large part due to its complexity. If you look at the fund’s portfolio, you will see some on-the-surface terrifying and stultifying things. 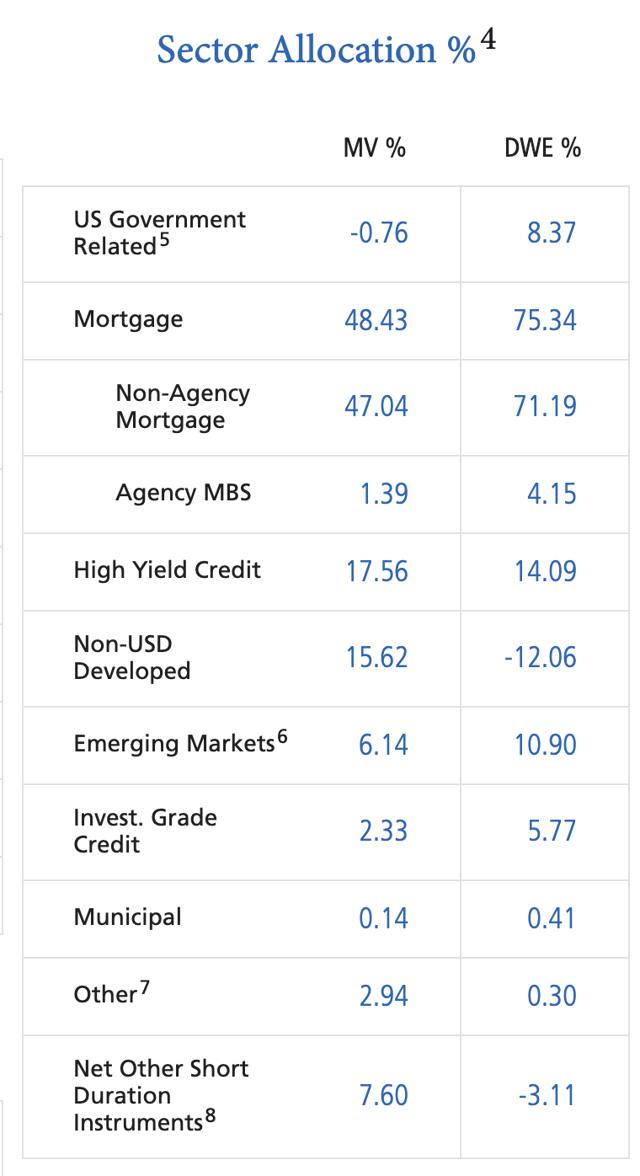 Not everyone understands what an MBS is, but many will remember it from The Big Short, which will turn the most risk averse away. But if you look more deeply, you will see even more complicated things that likely terrify the non-specialist, like interest-rate swaps and credit-default swaps.

In truth, these are pretty simple instruments used to manage interest-rate exposure and/or hedge a larger portfolio, and PCI’s use of these instruments is responsible and productive (as one would expect from one of the best bond investors in the world). But non-finance people are often terrified when they see these things.

Even if you don’t understand their use, investing in PCI is trusting that PCI’s managers will use them judiciously. This is how all investing works. You may not understand how an iPhone works, but you will still buy shares in Apple (AAPL) because you trust that management knows how to use components to produce a profitable product. The logic applies to PCI or any other managed asset on Earth, whether it’s a fund, a bond, or a stock.

Similarly, NII statements are woefully misunderstood, and this is in part because of PIMCO’s greater transparency. Since PIMCO publishes NII statements monthly, many pore over these and panic at less than 100% dividend coverage. Since some of PCI’s profits come in the form of capital gains, and since much of the fund’s strategy involves trading bonds rather than holding and collecting income, NII is useless as a metric of the fund’s health. To read more about why NII is not a good metric to focus on for CEFs, please see here.

PCI’s pivot in 2016 has brought it more into PDI’s territory of investing in mortgage-backed securities (MBS), which can be considered the antagonist of The Big Short.

Indeed, poorly rated and poorly priced MBS in an illiquid market was the primary cause of the worst recession of the last 80 years; however, never have two consecutive recessions in U.S. history had the same cause. In fact, buying the worst asset in the world that was directly the cause of a recession right after the recession hit is often the best thing you can do.

PIMCO knew this, which is why it launched PDI in 2012, at a time when MBS were still ridiculously underpriced, although mortgage default rates had finally levelled off. PDI was such a success that, when they decided to retool PCI’s mandate, it was largely modeled after PDI.

While PDI has attracted a following thanks to its stellar performance despite its MBS focus, PCI has failed to do so because of its less impressive long-term performance. And PCI is still gaining capital at a much slower rate than it would in a more efficient market simply because too many investors are afraid of MBS, despite all evidence that the secondary mortgage market is one of the most robust and safest in our post-2008 world.

The third reason why some shy away from PCI is the most justifiable (since, arguably, the other two are entirely unjustifiable). PCI is heavily levered.

With 47% total leverage, PCI is flirting dangerously close to regulatory limits. There is also the risk of forced selling in a crash: if PCI faces a sudden bear market that results in a higher leverage ratio, it could be forced to sell assets during the crash (a scenario that, theoretically, CEFs are designed to avoid, unlike their mutual fund and ETF cousins).

A bet on PCI, then, is ultimately a bet on the fund managers’ ability to avoid a crash and sell orderly when necessary, as well as a bet on the health of the MBS and corporate debt markets.

Throughout its history, PCI has addressed this through a hedged approach. Remember those interest-rate swaps (IRS) mentioned earlier? Those partly exist to protect PCI from a crash, but the fund also uses short positions in other bonds and derivatives as another hedge.

Going back to PCI’s portfolio, we see that the fund is short duration on a number of U.K. bonds. Avoiding the complexities involved, the bottom line here is that PCI is betting on U.K. yields rising, U.K. bond values falling, the pound sterling falling, or a combination thereof. These also are in effect a hedge against the speculative bond markets more generally, although an imperfect one (if, for instance, the world’s bond markets collapse and the U.K. remains untouched, PCI’s hedge would work against it and the fund would lose a lot fast). In effect, don’t buy PCI right now if you think the U.K. is going to massively outperform the U.S. and the rest of the world.

Misunderstandings of PCI’s complexity have resulted in the fund attracting capital more slowly than it should, which provides a rare opportunity to both beat the market and get a higher income stream if investors buy PCI. The 3-year trend of outperforming the S&P 500 is by no means at risk of stopping, yet PCI’s much smaller premium provides a rare opportunity to get alpha at a big discount.

Disclosure: I am/we are long PCI. I wrote this article myself, and it expresses my own opinions. I am not receiving compensation for it (other than from Seeking Alpha). I have no business relationship with any company whose stock is mentioned in this article.