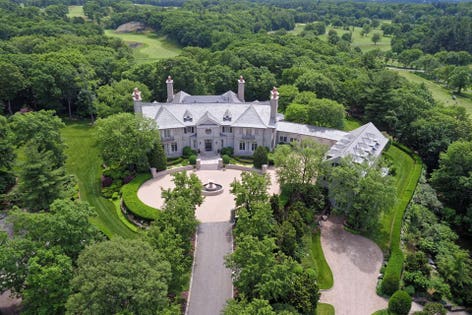 The founder of sneaker giant Reebok has relisted his dream home in Massachusetts.

Paul Fireman, together with his wife Phyllis, built their stately mansion at 150 Woodland Road (dubbed “Woodland Manor”) in 1999 on seven acres in the Boston suburb of Brookline, with the help of the international architecture firm Shope Reno Wharton.

It is being hailed as a trophy property for George and Manny Sarkis of Douglas Elliman, who priced it at $38 million. The estate’s full 14 acres were originally listed three years ago for $90 million, but have since been divided.

The manor is now the second-most expensive home currently on the Boston-area market, since the price for New England Patriots quarterback Tom Brady’s abode up the street at 112 Woodland Road received a price cut to $33.9 million. The priciest home in the city is a $45 million penthouse in the Millenium Tower.

Enclosed by an exterior constructed entirely of limestone, the eight-bedroom home sports seven full bathrooms and five half in 26,000 square feet of living space, along with a four-car garage.

“We built Woodland Manor as the house of our dreams – every corner was carefully crafted with so much love and care,” Fireman said. “We have held some of the finest parties here, starting with cocktails in the entryway and ending with a feast in the formal dining room.”

Its grounds, which border the Brookline Country Club, feature a ramble of pathways, ponds, fountains and gardens.

“While the interiors are so masterfully done, I have to say our favorite feature of the home has to be the lush exteriors,” Fireman added.

A similar sales figure already made national headlines this week, when tech power-couple Michael and Xochi Birch listed their San Francisco estate for $39 million, which would match the highest price ever paid for a home in the Pacific northwest city.

But while San Francisco’s median single-family sales price was $1.58 million in the third quarter of this year, according to Sotheby’s International Realty, Douglas Elliman reported Boston’s median at $866,500.