A woman enters the WeWork Cos. Iceberg co-working space in Tokyo, Japan.

Last year WeWork boasted of becoming the biggest private tenant in Manhattan, London and Washington, D.C. Those feats have now become an albatross, and WeWork’s biggest investor, SoftBank, is scrambling to keep the co-working space provider from spiraling into bankruptcy.

Just nine months ago, WeWork was valued at $47 billion in a SoftBank-led financing round. Looking at an imminent IPO, the company also rebranded itself to the We Company, because “we are always growing and in a constant state of self-discovery, self-growth, and change,” according to a blog post at the time.

CEO Adam Neumann is now gone, and the company has scrapped its IPO along with a $6 billion debt financing that was tied to the offering. That means WeWork, which lost $900 million in the first six months of 2019, is poised to run out of money by mid-November, CNBC reported this week.

SoftBank, WeWork’s biggest outside shareholder, and J.P. Morgan Chase, its third-largest backer and primary lender, have every incentive to keep the company alive and are aggressively trying to pull together financing packages with the aid of outside investors and lenders.

Without a lifeline in the billions of dollars, WeWork will face an ugly fate, with bankruptcy firmly on the table. In turn, the entire commercial real estate market could be upended.

“It’s like you’re trying to sell a property and you’re talking about renovation and some cosmetic work and all of a sudden you have a fire,” said Jake Cantu, global co-leader of the technology, media and telecommunications practice at consulting firm AlixPartners in Chicago. “Then it’s really a completely changed scenario.”

WeWork is shuttering non-core businesses and divesting assets like Neumann’s private jet in an urgent effort to control costs. Last week, WeWork announced it would close its Manhattan private school, WeGrow, in 2020, and the Guardian reported on Tuesday that the company may lay off at least 2,000 of its 15,000 employees as soon as this week.

WeWork’s core concept as a business is to turn its massive leases into tech-friendly spaces for businesses of all sizes, including early-stage start-ups with uncertain prospects. WeWork calls tenants “members” and counted 527,000 of them across the globe at the end of June, up 97% from a year earlier.

WeWork had $22 billion in long-term liabilities as of June 30, with $17.9 billion of that tied to long-term leases, according to its prospectus. The company warned that the length of the leases “extend for periods that significantly exceed the length of our membership agreements with our members, which may be terminated by our members upon as little notice as one calendar month.”

Now, as one part of its liability management, the company is focusing on renegotiating or getting out of its most expensive leases and concentrating on its best properties, according to a person familiar with the matter who asked not to be named because the negotiations are private.

But unlike a retailer short on cash, which can simply halt payments for goods, a service company like WeWork can’t just stop paying leases.

Landlords who have WeWork as a major tenant may not want to see it go bankrupt, and therefore might give it a short term reprieve by renegotiating rent or other alternatives, say experts. The trouble is, figuring out which deals WeWork can renegotiate or exit will be complex.

Doing so in a month would be a Herculean feat.

“The IPO only filed in the middle of September, now it’s the middle of November that they may be out of cash,” said Stephen Selbst, the chair of the restructuring and bankruptcy group at New York law firm Herrick, Feinstein. “They don’t have the luxury of time to do an in-depth analysis.”

In bankruptcy, WeWork could more immediately break and renegotiate its leases. But that move would rattle multiple commercial real estate markets that WeWork now dominates.

In May, real estate firm CBRE published a report on the flexible office market, showing that WeWork had added almost 11 million square feet to its portfolio since the second quarter of 2018. CBRE said WeWork now accounts for 33% of the entire flex space market, making it almost twice the size of closest rival Regus (IWG), a company founded 20 years earlier.

In the past year, WeWork was responsible for the five largest flexible operator transactions in Manhattan, amounting to over 1 million square feet, bringing its market share of flexible working space there to 48%, according to CBRE. It also accounted for the five biggest flex-space deals in Los Angeles and Denver, and four of the top five in Washington, Boston, San Francisco, Seattle and Atlanta. 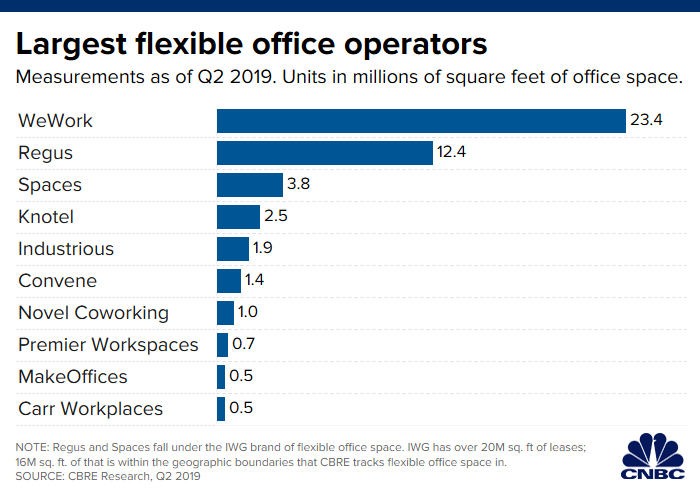 Most vulnerable may be the commercial firms that have leased out entire buildings to the company, and would now have WeWork-branded buildings without a principal lessee and, in many cases, an unreliable tenant base.

Many of WeWork’s landlords, which include TH Real Estate, have also subsidized WeWork’s growth by offering funds for renovation.

Billions of dollars of equity value has already been wiped out and employees are staring at worthless options. If the company were to declare bankruptcy and continue as a going concern, it would need some sort of incentive structure to keep everyone from walking out the door, especially the talent that it wants to keep or recruit.

“You’ve got this perfect storm where you can just see things feeding off each other and making the storm worse,” said Charley Moore, CEO of RocketLawyer, a provider of online legal support and documents. “The only way most businesses break free of that is with a significant restructuring of both costs and capitalization.”

Beyond restructuring and getting out of leases, a bankrupt WeWork would likely try to reorganize by striking a deal with its lenders and coming up with a plan to emerge. But WeWork’s assets are sprawling and complex, particularly outside the U.S., complicating matters further.

For example, In China, WeWork owns 59% of ChinaCo, the exclusive operator of the company’s business on the mainland as well as in Hong Kong, Taiwan and Macau. It also has partial ownership over JapanCo and PacificCo, which covers Singapore, Korea, the Philippines, Malaysia, Thailand, Vietnam and Indonesia.

Among the leading partners in the joint ventures is SoftBank, which has contributed $1.65 billion of its total $10.65 billion WeWork investment to the Asian entities.

“A WeWork bankruptcy would turn into a devastating financial debacle to SoftBank and the commercial property owners who invested hundreds of millions in improvements,” said Schiffer.

Goldman warns delayed election results this November similar to Bush-Gore could rock the market
5 ways to beat the stock market — from a fund manager who’s done this for years
Real Estate And The Future Of Work
Home buying and selling went virtual during the pandemic. Can it stay that way?
Renters In These States Are Most Likely To Face Covid-Related Evictions