The Cohen & Steers MLP Income and Energy Opportunity Fund, Inc. (NYSE:MIE) is a closed-end fund with approximately $350 million in total assets, investing in midstream master limited partnerships (MLPs), broader energy sector stocks, and has a smaller allocation to preferred securities. The fund has an income focus and currently yields 11.4%, which is based on a monthly distribution of $0.077 made in part as a return on capital. This has been an incredibly difficult market segment in recent years, considering the collapse of energy prices going back to the highs from 2014. On the other hand, the fund is up 18% year to date in 2019 on a total return basis, with a rebound particularly from the period of extreme volatility that ended 2018. This article takes a look at the current composition of the fund, highlighting a mixed performance record relative to its benchmarks. We discuss trends in the industry and our view on where MIE is headed next.

MIE invests in midstream MLPs and energy companies engaged in the exploration, production, gathering, transportation, processing, storage, refining, distribution or marketing of gas, oil and coal-related energy sources. From a sector (sub-industry) perspective, companies within diversified midstream represent 29.2% of the fund although we note that there is generally some subjectivity in terms of classifications. Crude and refined products producers represent 29.4% of the fund while gathering and processing sector is 24.4%.

The company utilizes leverage and currently has an effective leverage ratio at 31.36%. The fund composition also includes a 7% allocation to preferred securities which have a fixed income component and constitute a broader sector exposure including to some banks. The total expense ratio of 2.59% includes 0.93% of the interest expense as the cost of borrowing. The actual management fee is 1.38% 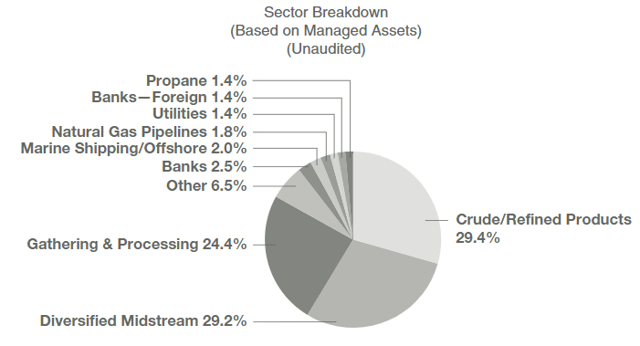 MIE’s inception date back in March of 2013 coincided with a particularly strong bullish sentiment in MLPs and the energy sector that would ultimately peak in the summer of 2014 when WTI oil prices reached over $110 per barrel. A generalized global supply glut amid record production both in the United States and globally, along with a trend of strengthening in the U.S. dollar that year, was pointed to as the culprit for what has been described as a collapse in the market. Fast forward to today, more than 5 years later and energy prices along with stocks in the sector have not yet fully recovered. As it relates to midstream, the idea is that companies in the industry were just too bullish, even becoming aggressive with investments at the late stage in the cycle which led to major write-downs. 2015 was a particularly weak year for MIE where the NAV fell by 37% as the value of its investment portfolio moved lower with the market. The NAV of the fund has steadily declined since 2014 as the total distributions paid to shareholders have superseded income from operations over the period.

According to the official performance data from Cohen & Steers, MIE’s NAV has underperformed its benchmark which is the Alerian MLP Index since inception, and over a 5-year, 3-year, 1-year, and the quarter-to-date time frame through September 30, 2019. On the other hand, we note that on a year-to-date basis, which is not presented by the fund, MIE is up 17.5% compared to 6.25% for the Alerian MLP Index, although much of this has been based on a rising price premium to NAV dynamic which we discuss further below. 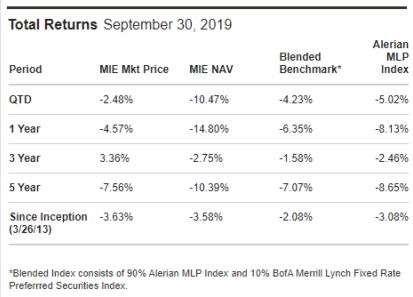 It’s worth mentioning that Cohen & Steers also uses a separate “blended benchmark” consisting of 90% of the Alerian MLP Index and 10% from the BofA Merrill Lynch Fixed Rate Preferred Securities Index. MIE currently invests about 7% of the fund’s assets into preferred securities, so the thought is that the blended benchmark better captures the fund’s investment strategy. Still, data shows that since inception and the 5-year period, MIE has also underperformed the blended benchmark in terms of NAV and market price.

Overall, we’re not impressed with the performance, considering MIE has exhibited a wider level of volatility and higher risk even compared to the ALPS Alerian MLP ETF (NYSE:AMLP) which is an exchange-traded fund that tracks the index by the same name. Investors would have simply been better off with the passive investment vehicle that also has a lower expense ratio at 0.85% compared to 2.59% for MIE.

Taking a look at the current underlying holdings data as of September 30, 2019, MIE features many of the major MLPs among its top holdings. As an actively managed fund, keep in mind the weightings are going to be based on the portfolio manager’s discretion and vary significantly from the index composition. Enterprise Products Partners L.P. (EPD) is the largest holding in MIE with a 15.7% weighting in the fund while the stock represents just 10% of the Alerian Index, for example. The table below presents the top 25 holdings and recent performance metrics. 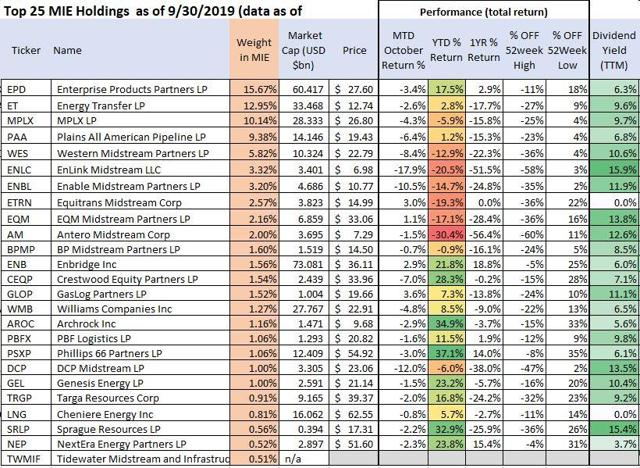 Among the top holdings, the returns have been poor with 7 of the top 10 holdings having a negative return in 2019. Antero Midstream Corp. (AM) with a 2% weighting is down 30.4% on a total return basis as the worst performer while a 1% position in Phillips 66 Partners LP (PSXP) is the best performer, up 37.1% year to date. Notably, most of the stocks are down over 20% from their respective 52-week highs essentially in a bear market, highlighting the challenging market environment and current sentiment among the group. As expected, these are mostly high-yield names with dividend yields among the top holdings ranging from 3.7% for NextEra Energy Partners, LP (NEP) to 15.4% for Sprague Resources LP (SRLP).

As mentioned, the distributions from MIE are mostly designated as return of capital. This portion of the monthly distribution gets a favorable tax treatment and are referred to as tax-free dividends or nontaxable distributions. Investors’ cost basis is reduced by the same amount for each distribution, so the tax liability is effectively transferred when the shares are eventually sold. In general terms, if the market price of MIE remains flat over a holding period, capital gains at the time of sale will be based on a lower adjusted cost basis. If the cost basis moves below zero from holding the fund over many years, then subsequent return-of-capital distributions are taxed as ordinary income. There are complexities here including implications such as whether an investor elects to participate in the automated dividend reinvestment plan. Please consult with a certified public accountant for tax advice.

The point in mentioning the return of capital is that as the NAV becomes depleted without a corresponding rise in the value of the investment portfolio, the fund will need to either cut the distribution in the future on a per share amount or conduct a rights offering. Indeed, the current monthly distribution at $0.077 per share was previously a $0.33 quarterly distribution (representing $0.0825 per month) back in 2015.

MIE currently trades with a 1.4% premium to NAV. In the world of CEFs where it’s not uncommon for funds to trade at wide discounts or premium to the net asset value, 1.4% is relatively standard. In context, however, the current premium is significantly above the historical average discount at which investors have been previously been able to acquire shares in the fund. The 5-year average discount to NAV is 8.25% and as wide as 13% as recently as December 2018, suggesting the fund is expensive at the current level. By this measure, upwards of 10 percentage points in the fund’s year to date total price return is based on the narrowing of the fund discount.

We believe the rising premium in MIE is based on the trend of a more dovish Fed policy stance this year, including the rate cuts and expectations of more monetary easing going forward. Since MIE utilizes leverage in its strategy, the lower cost of borrowing is a favorable trend that has also supported the operating environment of some MLPs that similarly are also financially leveraged. Still, the tailwinds from effectively cheaper credit have their limitations and can’t sustain the fund’s performance over the long term. We are overall bearish on the midstream and energy.

We’ll give the fund manager a benefit of the doubt that MIE could be able to outperform its benchmarks more consistently over a long period of time in more favorable market conditions. Indeed, in a scenario where investors are very bullish on midstream and energy sector, a leverage fund like MIE could be a compelling investment vehicle to the upside. With that said, the underperformance history compared to the fund’s benchmark has been disappointing. Without a clear recovery to energy prices we are avoiding MIE.

While a long position in the midstream MLPs at this point could be an interesting contrarian type play, we expect the fundamentals in the broader energy sector to remain weak and view MIE as a high-risk fund. While many investors may be attracted to the advertised yield of the fund at 11.4%, the data shows a mixed performance record that does not appear to generate a significant advantage against more passive investments in the MLP and energy infrastructure space. Separately, the current premium to NAV keeps us more cautious on the fund which appears relatively expensive compared to its historical pricing discounts. Shareholders may find it prudent to avoid the automatic distribution reinvestment and instead opt for the cash payout, looking towards an opportunity to add shares in the future should the fund revert to a discount. Take a look at the fund’s most last annual report for a full list of risks and disclosures.