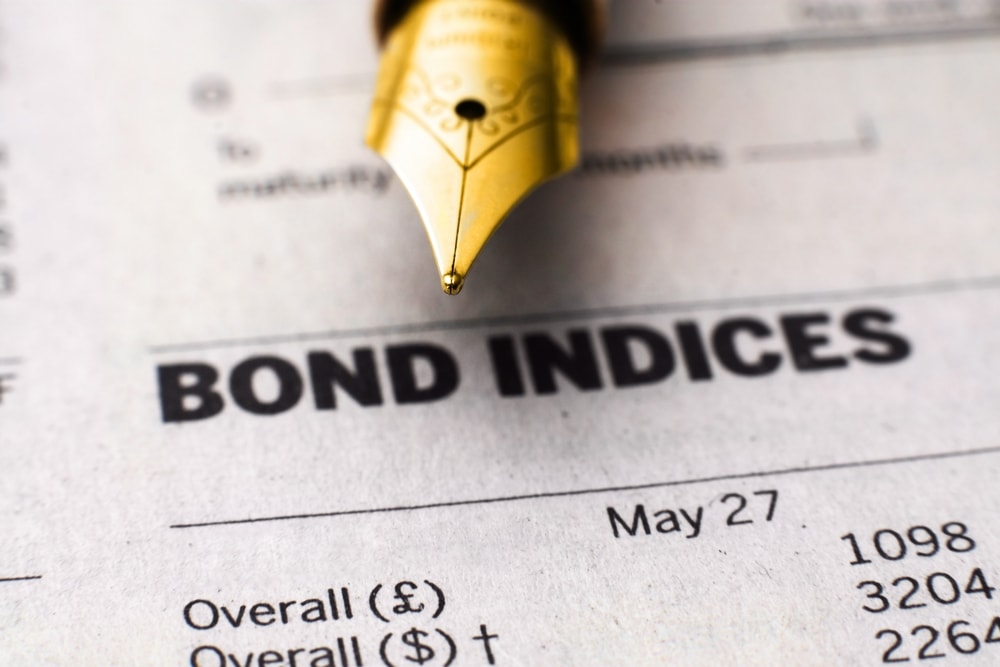 The purpose of this article is to evaluate the Schwab U.S. Aggregate Bond ETF (SCHZ) as an investment option at its current market price. SCHZ has had a strong year so far, offering a return close to 10% through October 23rd. However, in the short-term, fixed-income has broadly come under some pressure, as investors have found a renewed appetite for risk. With treasury yields climbing over the past few weeks, I feel now is a good time to add to fixed-income positions, especially those on the high-end of the credit rating ladder. SCHZ fits this bill, as the fund has almost 90% of its assets in debt A-rated or better. While the fund’s yield may not seem high enough to entice investors, we need to consider that the future outlook for interest rates in the U.S. remains dovish, so it may be wise to lock in current yields before they drop again. Furthermore, government debt around the world is offering even lower yields than U.S. government debt and, in some cases, negative yields. This reality could drive foreign interest in to U.S. government bonds, and funds like SCHZ could be primary beneficiaries if that trend does develop.

First, a little about SCHZ. It is an ETF with a primary objective “to track as closely as possible, before fees and expenses, the total return of the Bloomberg Barclays US Aggregate Bond Index.” Currently, the fund trades at $53.65/share and pays monthly distributions, which yield of 2.78%. This is my first review of SCHZ, and has come about as I have been divesting some equity exposure, and looking to put that cash in to income generating products. While I have been primarily buying municipal debt, preferred securities, and CEFs with a mortgage-debt focus, I continue to believe aggregate bond funds like SCHZ could have a place in investor portfolios. While SCHZ’s yield is lower than where it sat at the start of 2019, I believe there is value in the income stream, and I will explain why in detail below.

To begin, I want to discuss a key reason why I would use SCHZ as a fixed-income vehicle right now. This relates to the fund’s holdings, which are heavily concentrated in government backed debt. In fact, U.S. government debt makes up almost 40% of total fund assets, as shown below: 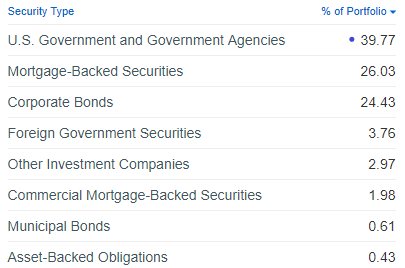 With this in mind, I want to discuss why I feel U.S. government debt remains attractive for income investors at this time. Of course, yields have gone down significantly on U.S. government debt this year, as the Fed has already cut interest rates twice, and is expected to cut further through next year. While lower yields can certainly make the bonds seem less attractive, it is important to consider where the yields stand relative to their global counterparts. While U.S. government yields have fallen, they are still very competitive on a global scale, as many countries are seeing their debt yield much less, or even negative amounts, as shown below (yields as of 10/11): 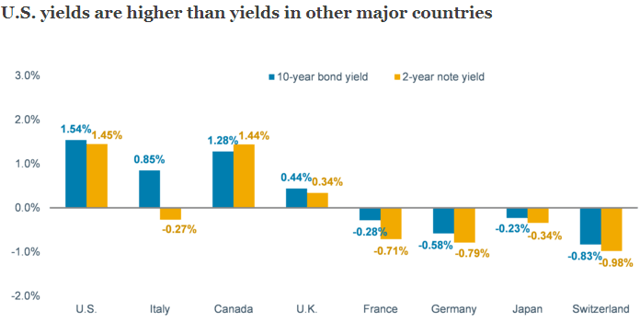 With this in mind, I feel there is a valid rationale to buying government bonds, even with seemingly low yields. For one, investors do not have much of an alternative, if they want safe, government-backed debt. While higher yields can certainly be found in the market, investors would need to go down the risk ladder in order to obtain them, and that is something they may or may not be willing to do. Second, foreign investors, especially in central Europe and Japan, are seeing their government offer negative yielding bonds. While there are buyers out there for this debt, I do not believe it is in the best interest of retail investors to go this route. Therefore, I would expect to see foreign interest in U.S. government debt, and SCHZ by extension, because the yields offered in the U.S. appear much more competitive when we consider what is abroad.

While I mentioned earlier than SCHZ’s yield has been declining this year, that was in reference to the marked rise in share price (yields move in opposite direction of bond prices). Therefore, while the lower yield may seem less attractive, we have to consider that total return for current investors has been quite strong, which could make many reluctant to sell as we wrap up the year due to potential tax consequences for doing so.

Furthermore, while the absolute yield has indeed fallen due to the marked rise in share price, the actual income stream has been growing this year, which makes me very confident in the fund. While the income is nowhere near what I would consider “high”, the year-over-year gain to the distribution stream is quite solid. Considering we have been in a declining interest rate environment this year, SCHZ’s distribution growth is a welcome sign, as shown below:

Clearly, this is a positive for the fund, and is a welcome development especially for income-oriented investors. While the overall yield has declined throughout 2019 (due to the rising share price), this decline has been mitigated by the rising distribution level.

My overall takeaway here is this reality gives me confidence in the underlying holdings within SCHZ’s portfolio. While a 2.78% yield does not seem too exciting, the fact remains the fund is offering a yield well above what government bonds are offering on a stand-alone basis, especially when international government bonds are considered. When we couple this with the fact that the distributions have grown almost 8% year-over-year, it is clear to me that SCHZ is made-up of strong performing debt. As worries over a slowing global economy and trade concerns linger, I feel this is a smart place to put cash to work while waiting for some headwinds to clear.

As I mentioned, I feel the current price for SCHZ offers some value. But investors may be wondering, after the broad run-up fixed-income has had already this year, why is now a good time to initiate, or add to, positions?

This is a fair question, and it is worth pointing out that while bond prices have surged in 2019, they have come under pressure in recent weeks. This is because the risk-on trade appears to be back, with the major equity indices sitting within a few percentage points of all-time highs. While trade concerns between the U.S. and China linger, coupled with renewed geo-political risks surfacing in Syria, Iran, and the U.K., investors seem to be shrugging off those concerns for the time being. With earnings season in full swing, investors have been rotating back in to equities at the expense of bonds in the short-term. The net effect has been an uptick in treasury yields during the month of October, as shown in the graph below:

As you can see, yields have been climbing on the 10-year treasury, along with other shorter duration government bonds. While still fairly low in absolute terms and when compared to the beginning of the year, this recent uptick seems to offer a relatively decent buy opportunity given where yields stood throughout most of August and September. While bond prices could certainly fall further (pushing the yields up higher), I feel the market is currently overlooking much of the market risk out there right now. My takeaway is there appears to be an uneasy calm over the market, and locking in current yields, which have risen a bit in the short-term, would provide a hedge in case market volatility picks back up, which I expect to occur. 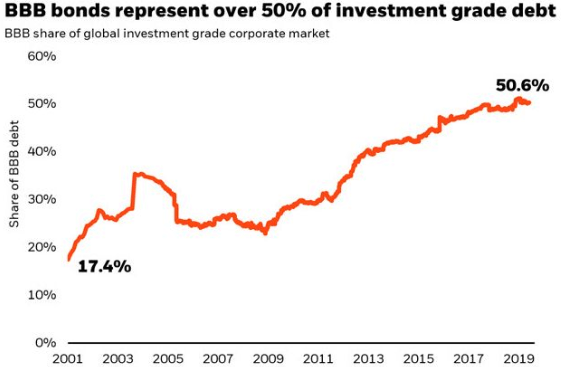 As you can see, the lowering of the overall credit rating within the investment-grade corporate debt market has been a multi-year trend that has only recently begun to flat-line.

My point here is simply to highlight that investors need to be aware of some of the fundamental changes going on in the corporate bond market. Of course, these factors have a bit of a negative slant to them, so readers may be wondering why I am simultaneously recommending SCHZ. The rationale behind it is that SCHZ, while holding almost a quarter of its assets in corporate bonds, is made up predominately of bonds from the higher rated categories. In fact, the large majority of the fund overall is AAA-rated, and only 13% of total holdings are rated in the BBB category, as shown below:

My takeaway here is that SCHZ is a high quality ETF, with over 85% of its assets in A-rated or better categories, and the fund is relatively light on BBB-rated debt, which cannot be said for many investment-grade products. With total corporate debt growing and lower-rated corporate debt making up a larger portion of the total pie, I want to focus on higher quality assets, and that is precisely the exposure that SCHZ provides.

With bond yields low and equities seeing some resilience, many investors may find it strange timing to consider buying bond funds like SCHZ at current levels. However, I see current prices as a unique buying opportunity for a few reasons. One, I believe the market is becoming too complacent to the headwinds surrounding the U.S. economy, and I feel taking some risk off the table and buying investment-grade bonds is a prudent course of action right now. Two, while bond yields have declined in 2019, they have seen an uptick in the short-term, which tells me now could be a good chance to lock in yields before they head lower. Three, on a follow-up to the following point, interest rates are likely to head lower, which tells me fixed-income investors would be wise to buy now and not to wait. The market believes the Fed is on course to cut interest rates again at the end of the month, with an almost 95% certainty, according to futures data compiled by CME Group. If interest rates do decline next week, investors will wish they had bought in now before that action. Therefore, I believe now is a ripe time to buy SCHZ, and I would encourage investors to give the fund consideration at this time.