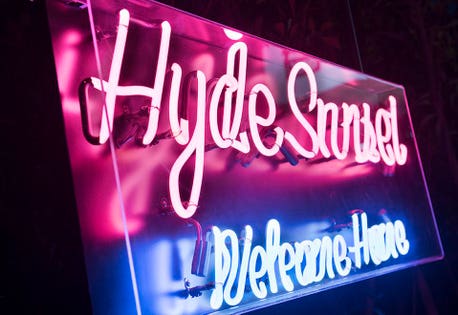 While design has been of the utmost importance for restaurants, hotels, and nightclubs, in recent years, its emphasis has increased exponentially because of social media. When ordinary customers, influencers and celebrities are going to take photos and share it with tens to millions of people, the stakes simply become higher. Creating an experience is part of the game.

While many locations have specific places to take photos or rather, to create Instagramable moments, the new trend is to design almost entirely with social media in mind.

It’s All For The Gram

Frankie Delgado might be known to most from Mtv’s The Hills, but his success far exceeds reality television. Now a major player in Los Angeles nightlife, as a partner of SBE/Hyde Sunset, he calls Instagram their “main marketing tool”.

When Hyde was refreshed in 2018, there were several features created specifically for social media including the Welcome Home sign. “It was placed to have that Instagram moment and that memory of you being at your second home” says Delgado. “It creates a moment to take a picture and have that memory as you enter, or exit our space. Our guests love it.”

Even nightlife pioneers like Dave Grutman admit to pouring large amounts of cash into spaces for the sake of likes and comments. “Design has always been important, but yes, now that everyone lives on their phone you have to ensure the design elements are on point at all times. Sometimes you have to grow and evolve too. Look at LIV [at the Fontainebleau in Miami], we put a $10 Million renovation into the club to make sure that we are always ahead of the curve with the best technology and special effects. The LED lighting system is epic now and our guests leave the club saying wow.”

While these locations weren’t designed entirely with social media in mind, Clique Hospitality partner, Ryan Labbe shamelessly admits The Barbershop Cuts & Cocktails at the Cosmopolitan in Las Vegas was. “People don’t just expect a cool product anymore, they expect to see something unique and interesting, for the exact purpose of social media” he says.

It’s hard to fault him for being honest. “From the barbershop itself to the janitor’s closet to the stage, every step of the way, we wanted to create something that made people want to get their shot.”

Installing murals is an easy way for any space to facilitate content creation, but a lot of the time just feels like an interesting design feature.

A great example of a photomural is at Doheny Room in Los Angeles. “There seems to be four areas at Doheny Room most photographed. Our mural of the palm trees lining Doheny Drive downstairs is probably the most popular for people to pose in front of, especially during dinner service, and our green banana leaf wallpaper walls upstairs are also very popular spots,” says SBE nightlife director Nick Montealegre.

“The venue originally had a photo booth, but guests were drawn to these other spots to take photos. Eventually, that space was converted into a storage closet.”

Another famous mural, not too far away from the other venues is the Popsicle Mural at Skybar at the Mondrian. Created by famed artist Michael Turchin, it’s part of his “Dirty Pop” series for the hotel. Of course, the name is an homage to his husband Lance Bass and his band NSYNC.

Social media played an overarching role in the re-design of the Mondrian hotel in 2019. “In fact, initial conversations and planning start with how much of an impact new furniture, fixtures, and designs will have on social media interaction. We knew Michael’s popsicle mural would be a favorite focal point as guests enter Skybar from our Sunset entrance as soon as he presented the concept to us,” says Aidan Marus, who is the hotel’s director of nightlife.

Clique Hospitality owner Andy Masi doesn’t see the evolution of design as entirely about social media, but rather as part of a larger cultural inclination towards design and art. “Venue design has become incredibly important over the last decade, not necessarily just from Instagram, but really more about society’s overall desire to see and learn more about art and design,” he says.

“From designed centered television shows, magazines, and social media, design has made it to the forefront of the customer experience. Ten years ago you wouldn’t have guests coming in and asking who the designer was. It just was not on people’s minds.”

Art is a major aspect of Masi’s venue Greene Street Kitchen at Palms Casino Resort in Las Vegas. “When we were working on Greene Street, we had the artist Slicke create the incredible hand sculpture in the entryway that has become a signature photo moment as guests arrive, and is certainly a memorable piece for diners to look at.”

While creating Instagramable moments is important for marketing, it isn’t everything, explains owner of Los Angeles restaurant Margot and founder of IB Hospitality, Rohan Talwar. “When designing Margot, we definitely added a few fun elements we knew would be Instagram focal points, mainly the Love sign you are referring to. It gets a lot of social play” he says. “My marketing team definitely loved that design element. But, my focus is on the restaurant’s success and an inviting ambiance.”

The same can be said for the SLS in Miami with work from top designers including Philippe Starck, Marcel Wanders, and Yabu Pushelberg and David Rockwell. At the same time, the pool’s famous duck sculptures are hard to resist!

Outdoor spaces also naturally lend themselves to taking photos. For example, at The Pool House at The Pendry in San Diego, there’s nothing better than a classic sunset. “It’s the perfect combination of where beauty and environment meets design. The sunsets itself at The Pool House are a natural photo moment” says John Thomason who is the executive director of marketing at Clique San Diego.

As for the future of photo booths, they’re not going away entirely either. “We just launched a brand new green screen at LIV that guests can go to take photos in front of, like a photo booth” says Grutman. “They love it, they get to take home a memory.”