As a possible trade deal gets closer, investors are less fearful of a recession and interest rates are in a new trend higher.

Bond yields have moved dramatically back and forth since last week’s Fed meeting, but they have moved higher most recently on reports that the U.S. and China are close to a phase one trade deal. Also, as the worst fears of a trade war have lifted, there has been a gradual steepening of the yield curve, which is now at its widest level since March.

“The one thing in Washington that’s affecting markets, and the only thing, is the trade deal,” said Andrew Brenner of National Alliance. “Brexit, impeachment, budget deficit, lack of a budget — none of those things are affecting the market at this point. … How quickly you resumed higher rates and how quickly the curve is steepening out tells me the trend is changing, and we’re moving to a very large trend higher in interest rates.” 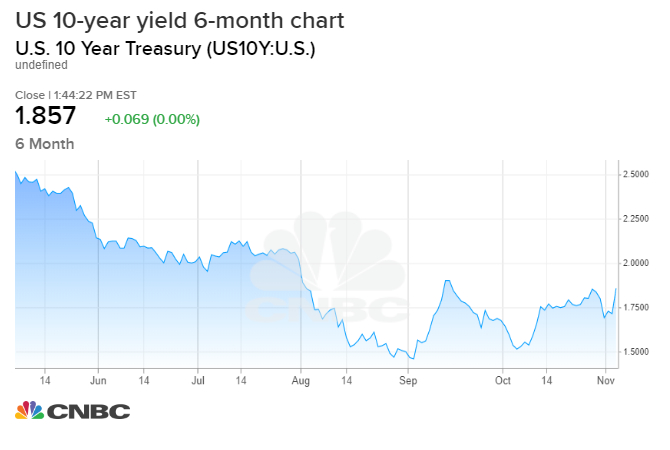 Bond yields rose around the world Tuesday on optimism an agreement would be reached between President Donald Trump and President Xi Jinping and that would help the global economy. As a result, the U.S. 10-year note yield moved between a low of 1.79% early Tuesday morning and a high of 1.86% on both the promising trade news and better-than-expected data on the services sector, which expanded faster-than-expected in October.

“On July 31, the Fed eased that afternoon and the 10-year closed at 2.01. The next evening, Trump fired off his tweets about more tariffs on China,” said Michael Schumacher, director of rates strategy at Wells Fargo. After that, the 10-year fell to a low yield of about 1.429% on Sept. 3.

“The ultimate move was about 60 basis points. We think a lot of that is being unwound. You can’t call the trade situation resolved, but it does seem to be improved,” he said, noting the 10-year could move about another 15 basis points by year end.

For the most part, strategists do not expect a big snap higher in yields, which move opposite price. Instead they expect interest rates to regain higher levels from earlier in the summer and also move higher in the next year, unless the trade talks fall apart.

The market is also responding to the Fed, which cut rates last Wednesday but signaled it was pausing policy moves for now. Initially, the market tested the Fed and rates moved lower, signaling investors believed the Fed made a policy error.

“I think a lot of this is optimism over the trade deal possibly getting done. I think some of the manufacturing data is turning. … There’s early indications that some of the cyclical parts of the economy are starting to come back. If that’s the case, we’re just not priced properly for it yet,” said Jim Caron, portfolio manager at Morgan Stanley Investment Management.

The 10-year yield hit its high for the year in January at near 2.80%, falling to its low in September. The 10-year is important since it is the bench mark that affects a number of business and consumer loans, including home mortgage rates. 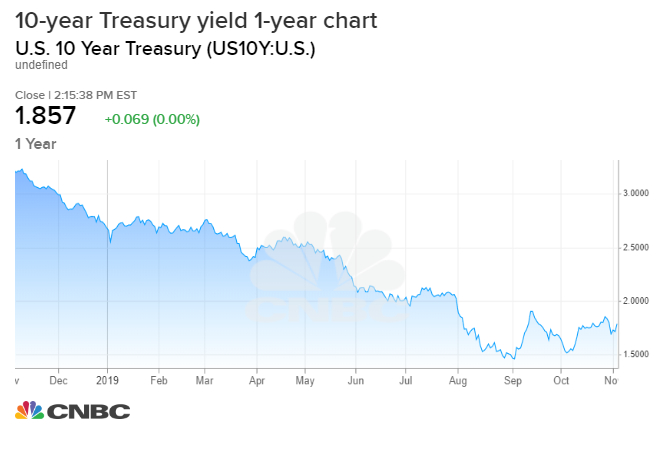 “It’s just a resetting of the rate level. 2% seems reasonable. Could we overshoot toward the 2.15 area? Absolutely,” said Caron. “You’re talking about unwinding some of those tariffs. So figure out where yields were when tariffs weren’t in place. If you look at the 10-year in early July, it was around 2.05 and 2.06% and that was after Trump and Xi sat down and talked about things. If we went back to those levels, it wouldn’t be surprising to me.”

Improvement in the economy has clearly been a factor after Friday’s better-than-expected October jobs report showed a solid gain, even with the strike at General Motors.

ISM services data Tuesday was better than expected and showed a rise in new orders. That helped lift yields, which were already moving on trade headlines. Last week, PMI manufacturing data showed continued expansion and ISM manufacturing showed an improvement over September, though it was still in contraction.

Bond pros are also watching the yield curve, which reflects the difference between short end rates and those at the long end. The yield curve, which was inverted in the summer, has steepened. The 3-month to 10-year spread is the steepest since March, and the 2-year to 10-year was about 23 basis points apart Tuesday, well above the 16 basis points it was at before the Fed meeting. 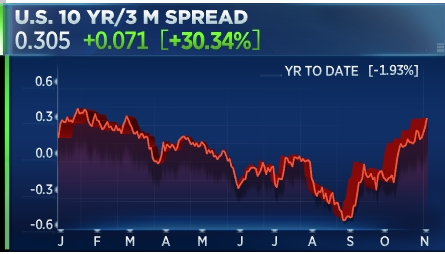 The curve inverted when the prospect for a trade deal was bleak, but has recovered on positive signs the White House and China were working toward a deal. News reports Monday and Tuesday said China is seeking to include the removal of some existing tariffs in any agreement.

That has been both encouraging to markets, which would like tariffs lifted, and also worrisome, as a possible new sticking point for the Trump administration. The so-called “phase one” deal, if it is agreed to, would include the suspension of tariffs that were to go into effect in December.

Caron does not expect a huge move in bond yields, but said the move could become exaggerated because of the phenomena of year-end trading which is when investors seek to lock in gains. He said the 10-year has been particularly attractive this year, and if its yield rises, some investors might sell, driving yields even higher.

The move higher in yields could continue if economic data gets stronger, but a failure in the trade talks would send them lower again.

“2.18 is around the 200-day moving average, and I’m not sure what happens before the end of the year. I do think 2.5% rates for 10-years are down the road,” said Brenner. The government auctions 10-year notes Wednesday afternoon, and Brenner said there has been speculation that the higher yields could draw interest from Japanese buyers.

For now, strategists see an orderly march higher in yields. “It all hinges on trade. If trade does improve, if the U.S. says we’re not imposing more tariffs and gets rid of some of them, that’s very big,” said Schumacher. “It would change the market outlook.”

Jobs data shows millions went back to work but unemployment rate for May is still expected at 20%
Millionaires cut spending, postpone big purchases for at least a year
Offices could be emptier in the future as people work from home. Here’s what investors need to know
SpaceX raises $346 million in most recent funding round
Giuliana Rancic And Interior Designer Lonni Paul Launch Decor Line, August & Leo On HSN