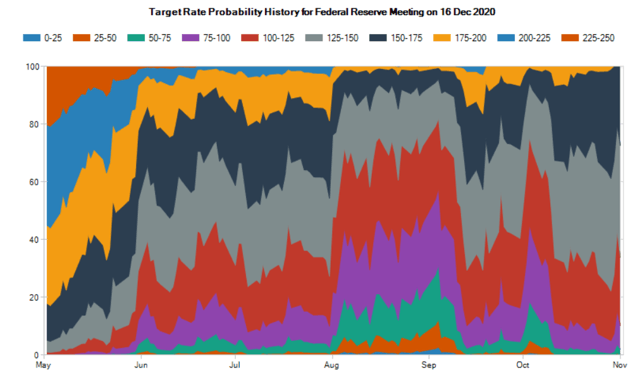 Despite the hawkish forward guidance delivered by the Fed at its latest FOMC meeting (October 30) after the central bank cut rates for a third consecutive time, the SPDR Gold MiniShares Trust (GLDM) has proven resilient, especially considering the surge in risk-on mood, which pushed US equities to an all-time high.

While we expected the Fed to push the “easing pause” button, we expected gold (and thus GLDM) to come under downward pressure due to a resulting appreciation in the dollar and US real rates.

However, the dollar and US real rates have remained resilient, reflecting the fact that market participants believe that the Fed is making a policy making, thereby unwilling to change their Fed rate outlook.

In line with the market’s view, we believe that the Fed is playing a dangerous game because the hawkish forward guidance in the face of a marked deterioration in US economic conditions could trigger a risk sell-off.

This fragile macro environment comforts our bullish view on GLDM.

We expect GLDM to move higher into year-end, with a year-end target of $16.30 per share. 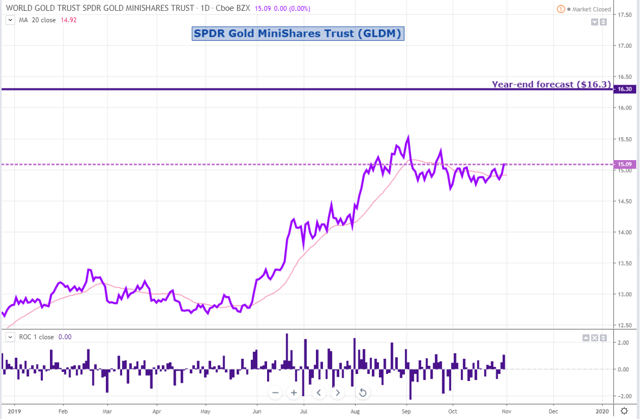 As a gold ETF, GLMD’s objective is to replicate the performance of gold prices less the trust expenses. To do so, the fund physically holds gold bars in a London vault and custodied by ICBC Standard bank. This physically backed methodology prevents investors from getting hurt by the contango structure of the gold market, contrary to ETFs using futures contracts. The strong co-movement between gold prices and GLDM tracks the fluctuations of gold prices very well.

There is a marginal premium in GLDM, which has fallen materially since its high of 2%+ in August.

Against this, GLDM is a potentially interesting ETF to get exposure to gold spot prices.

The Fed delivers a rate cut….

This was largely expected by the market, with the marking pricing in a rate of 1.625% by a probability of 90% just before the FOMC meeting. 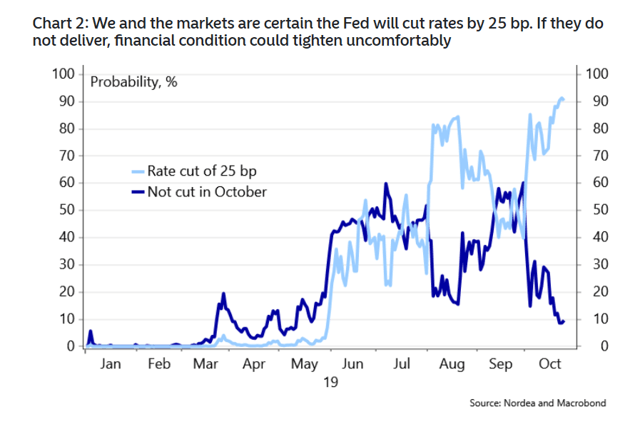 As we stated in a previous note, we find that the Fed has always delivered a cut when the probability of such a decision is above 80%.

…Accompanied by a hawkish surprise

However, Fed Chair Powell signaled a pause in easing after these third consecutive rate cuts (i.e., no more rate cuts to expect in near term), sending some hawkish undulations to the financial markets. In essence, these 3 “insurance rate cuts” are similar to those implemented by former Fed Chair Greenspan in 1998.

This hawkish guidance appears to have been overlooked by market participants, as the Fed funds future market continues to price in a rate of 1.25% by the end of next year.

The fact that market participants believe strongly that the Fed is making a policy mistake explains the absence of upward pressure in the dollar and US real rates. In fact, both the DXY (a proxy for the greenback) and the 10-year US TIPS yield (a proxy for long-term US real rates) have come under pressure following the Fed’s monetary policy conclusion.

In this respect, gold spot prices (and thus BAR) have remained resilient despite the hawkish rate cut. 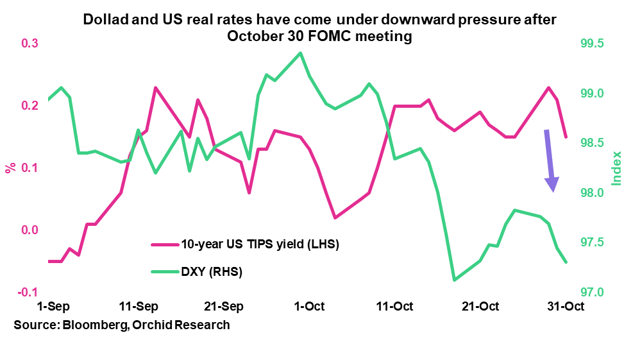 In our opinion, the Fed is playing a dangerous game in the sense in which it expects financial conditions to remain overall loose, implying no equity sell-off, despite the deterioration in economic conditions.

However, we believe that a sell-off in equities by year-end is likely, as the chart from our friends at Nordea illustrates. 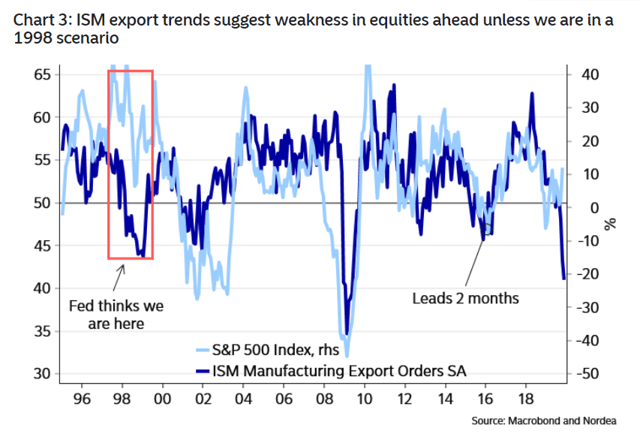 In such a scenario, we would expect a significant increase in safe-haven demand for gold (i.e., flight to quality) and a material increase in speculative demand for gold, triggered by a decline in the dollar and US real rates. This would push gold spot prices strongly higher, benefiting GLDM.

Because we are in the late phase of the US economic cycle, an inertial Fed will only hasten the deterioration in economic conditions, resulting in a supportive environment for safe-haven assets, especially gold.

Although we would have preferred GLDM to come under downward pressure after the Fed’s hawkish surprise to buy the dips, we respect the market action and strongly believe that GLDM will remain in an uptrend into year-end.

The Mall of America hasn’t paid its mortgage in two months
Stocks break through a major milestone that could signal a longer uptrend is ahead
Mortgage demand from homebuyers shows unexpectedly strong and quick recovery, as applications spike 9% from a year ago
Stocks making the biggest moves after hours: Ross Stores, Splunk, Palo Alto Networks and more
SpaceX raises $346 million in most recent funding round