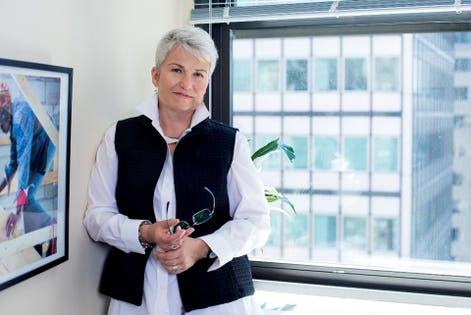 When you think of Habitat for Humanity, images of volunteers sitting in the rafters of unfinished houses in nondescript neighborhoods across America typically come to mind. But the affordable housing organization is active in urban areas too, including New York City, where 61,000 men, women and children were homeless in 2019.

This year happened to be Habitat’s 35th anniversary in the Big Apple. Its presence in the city began with a project on the Lower East Side, which transformed the burned-out husk of a six-story building into homes for more than a dozen families (and famously received some elbow grease by former Pres. Jimmy Carter). As of 2019, Habitat has helped more than 1,300 households and is on track to reach 2,021 by 2021.

Leading the way is Habitat NYC’s CEO Karen Haycox, who has been with the nonprofit since 2015. Equal parts real estate developer and volunteer, Haycox has spearheaded projects like the Sydney House in the Bronx, the largest single-structure project of any Habitat affiliate in the world. When completed, it will make 56 affordable homes for sale for low- to moderate-income families.

But New York is already chock-full of buildings, and due to high building costs, new developments are often in the luxury market, so it’s no surprise that the organization’s focus in the five boroughs is preservation of existing affordable housing. Its U.S. Treasury-certified Habitat NYC Community Development Fund recently closed four deals to preserve 310 affordable co-op units. Meanwhile, it recently co-founded the Interboro Community Land Trust, which aims to keep future housing projects permanently affordable.

In the midst of all this, Haycox also has to keep the Habitat brand alive and relevant, and attract new volunteers to help get its work done. I caught up with her to ask how she juggles all of this, where her fuel comes from, and why it’s so important to keep her mission going.

Heather Senison: Can you please tell me a little about your career path?

Karen Haycox: My first career was in film and television in Toronto, Canada. I held a number of positions in the industry but much of my work was in advertising. I was laid off in the late ’90s following an agency merger. One of my next opportunities was an executive recruiter. It seemed like a non-sequitur, but there were a surprising number of transferable skills between the two industries. Ultimately, it was that role that led me to Habitat for Humanity.

HS: What makes New York City a unique environment for Habitat to tackle?

KH: New York has one of the toughest and most complicated real estate markets in the country. The housing challenges that New Yorkers face are at the top of the news cycle every day – the cost of building, access to affordable land, the overall cost of living and specifically, the cost of housing. Demand for affordable housing solutions far outpaces supply. The challenges are enormous. Consequently, in response, Habitat NYC must be bold. In order to assure the affordability of homes for current and future generations of New Yorkers, we focus on both the development of new housing at-scale and on the preservation of existing affordable housing to prevent their loss to unaffordable market-rate development.

HS: New York is a city of renters. Why does Habitat put so much emphasis on home ownership?

KH: Property ownership has broad power to help low- and middle-income families achieve long-term economic stability. Even in a city as closely associated with the rental market as New York, the data makes it clear that there are unique benefits to ownership. Research shows that home ownership contributes to improved health outcomes, higher levels of education, increased access to better or more stable employment, more civically-engaged community members and reduced crime. Affordable home ownership is essential to the future of New York City and must be created on a larger scale in order to prevent displacement, promote investment in stable communities and help ensure that the public’s investment in housing also helps build assets for families and neighborhoods.

HS: How have you helped shape Habitat NYC since you joined the organization?

KH: These last five years have really been about positioning our organization for major successes in the near future. We launched the Habitat NYC Community Fund and the Interboro Community Land Trust. We are also leveraging our brand and our balance sheet in an effort to reach new and more vulnerable populations in new ways. For example, we are co-developing our very first rental project, Haven Green. When complete, the building will provide seniors and formerly homeless seniors with supportive housing in an LGBTQ-friendly environment, and a community-accessible open green space, right in the heart of Little Italy.

HS: What is the most difficult part of your job?

KH: There is so much more work than Habitat NYC can’t possibly accomplish alone. Anyone working in the affordable housing sector (or really, most working people) at least have a general sense that housing is too expensive here. In New York City, almost 1 million households struggle to pay rent. Those that cannot risk joining the ranks of the 10s of thousands of homeless, a number that has almost doubled in the last 10 years. A report from StreetEasy recently found that the median-income New Yorker would need to accumulate 18 years of savings before they could pull together a down payment on a median-priced home anywhere within the five boroughs. Similarly, NYU’s Furman Center found that home prices rose by more than 200% over the last 25 years, while the median household income fell by 11%. These daunting statistics underscore the difficulty of making home ownership truly affordable for hardworking New Yorkers.

HS: What is the most inspiring part?

KH: There is a parable that I like to keep in mind, you may know it: There are thousands of starfish on a beach and an old man is walking along, picking them up one at a time and throwing them back into the ocean. A young boy happens by and asks him what he is doing. Without looking up, he replies, “I’m saving these starfish.” The boy chuckles and says, “there are thousands, what difference will that make?” The man picks up a starfish, gently tosses it into the water and says to the boy, “it made a world of difference to that one!” In lieu of starfish, I have a litany of stories that populate my memory; faces of families and children, grateful to have been impacted by Habitat’s work, or volunteers from around the globe and around the corner, united in service to a family they have never met and coming away stronger from the experience.

HS: Thank you. For those in New York who want to get involved with Habitat, what is the best way for them to do so?

KH: We have volunteer opportunities for all people, whether they want to join us on a construction site or in the office. The only requirement is enthusiasm, we can teach you the skills needed to make an impact. Volunteers come to us as individuals, or by bringing together a group of colleagues and friends. We also often partner with corporations on team builds and we do the same for community and faith groups, as well as school and youth groups.

Markets are expected to be choppy, but dip buyers could be looking at tech favorites in week ahead
Debt refinancing plan big piece of Nassau County budget proposal
The new retirement living: More baby boomers shun housing mega-developments
Chime is now worth $14.5 billion, surging past Robinhood as the most valuable U.S. consumer fintech
Government mortgage bailout numbers improve slowly, but the real test is ahead