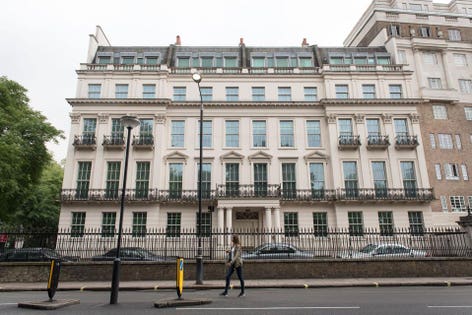 A Chinese property tycoon is set to buy a 45-room mansion in London for a record price in excess of £200 million ($262 million), making it the most expensive home ever sold in the U.K.

Cheung Chung-kiu, founder and chairman of property group CC Land, which owns the £1.15 billion Cheesegrater skyscraper in the City, has agreed to purchase the 62,000 sq ft mega-mansion for a price believed to be around £205 million and £210 million.

The deal, which was first revealed by Bloomberg, was brokered by Beauchamp Estates.

A statement from the Chung-kiu’s family office said the tycoon is considering whether the property would be used “as a single house for private client use” or converted into an ultra-prime multi-unit apartment scheme”.

A conversion into apartments could create a luxury residential scheme valued at an estimated £700 million.

The seven-storey house at 2-8a Rutland Gate, overlooking Hyde Park, was built in the 1980s and has interiors by French designer Alberto Pinto.

It previously belonged to Prince Sultan bin Abdulaziz Al Saud, the late former Crown Prince of Saudi Arabia, until his death in 2011.

When the purchase completes, next month, it will be the

The record was previously held by Park Place in Henley-on-Thames, Berkshire, which was acquired by the exiled Russian banker Andrey Borodin for £140 million in 2011.

“The luxury residential market in London has seen a significant bounce in demand – as some of the political uncertainty which dogged the market in 2019 has been replaced following the election of the first government with a workable majority in nearly a decade,” said Liam Bailey, global head of research at Knight Frank.

Bailey added that, due to the U.K.’s general election result, the number of exchanges in prime central London in December was the second highest monthly total since April 2014.

RMM: The Only Muni CEF With A 5% Yield, Achieved Through A Unique Strategy
Supply of homes for sale hits record low, and prices suddenly jump
History shows China’s coronavirus impact on markets likely to be short-lived
SVXY: Follow The Money
Why PREPA restructuring deal faces a political hurdle