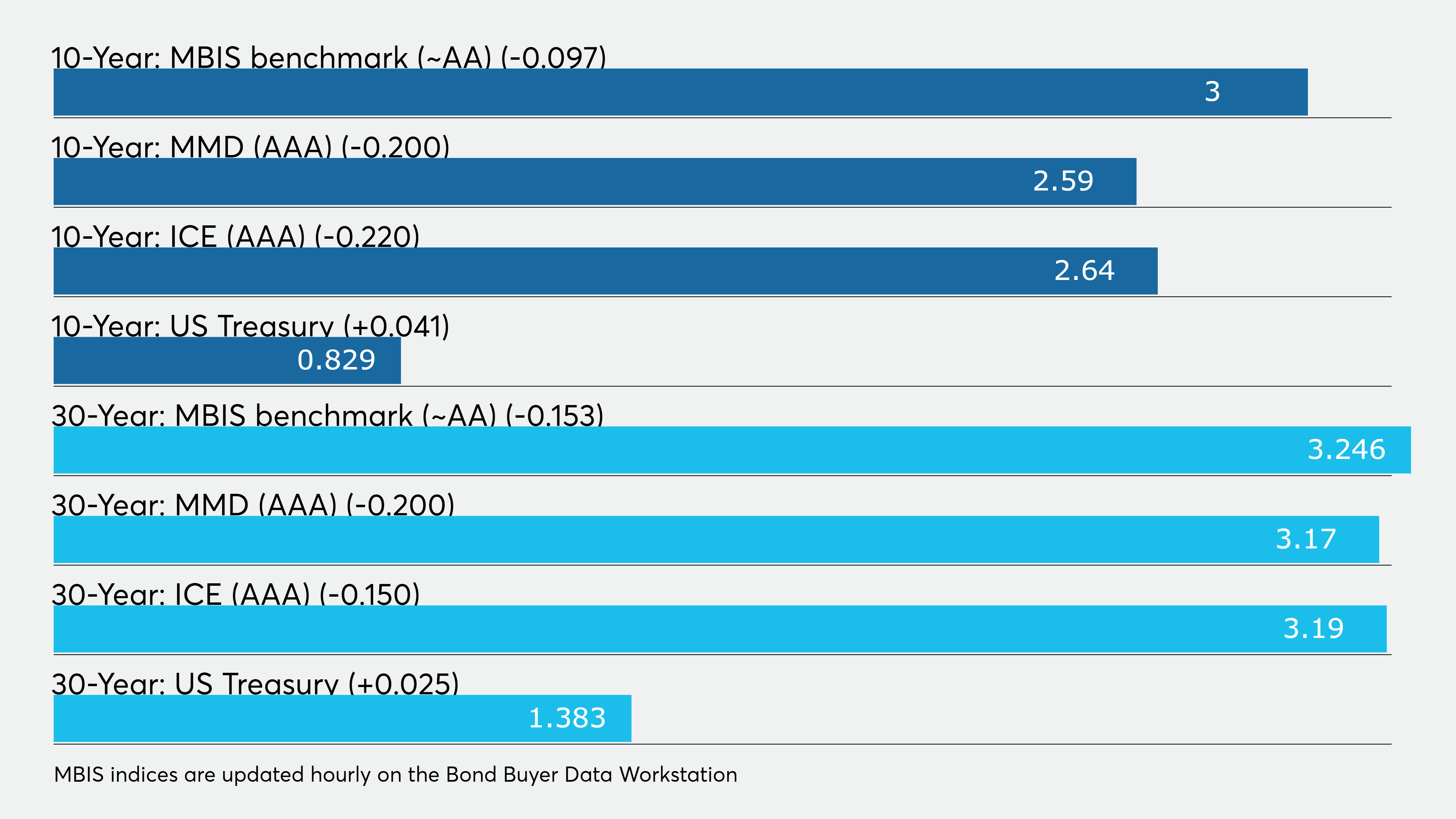 The municipal market rallied significantly Tuesday as participants placed bets that a stimulus package from Washington was coming closer to being reality and news that the Federal Reserve may be given authority to buy longer-dated municipal debt made its way around the Street.

The short end in particular was rebounding from the extraordinary sell off of the past two weeks after the Fed yesterday announced it would include variable rate demand obligations as well as short-term paper to its balance sheets.

While there was still no definitive answer from Washington on what the stimulus package might fully entail and whether the Fed would buy longer-term munis even if given that authority, the market was baking it into secondary trading on Tuesday.

A bill introduced by House Democrats would not only authorize but actually require the Fed to begin a muni bond purchase program, but it’s not clear whether the House will go forward with its own bill or just approve the Senate version.

In the secondary, rates fell by as much as 30 basis points or more on spots in the short end and by up to 18 to 20 on the long end. The entire municipal secondary was clearly trading at much lower yields and higher prices than it has been since the COVID-19 crisis gripped all markets.

That said, “the muni market is in the midst of arguably the worst dislocation since the Great Depression,” said Patrick Brett, head of municipal debt capital markets at Citi.

“Pre-refunding bonds have been trading 200 basis points cheap to Treasuries,” he said.

But he said that “things are firmer” as the market is “expecting the cavalry coming, with the draft of the Phase 3 Stimulus bill including vehicles for Fed purchases of munis, and participants are pricing in a high probability of that happening.”

Brett added that if a stimulus package passes and the market continues to rally and stabilize, it is conceivable that the essentially shuttered primary could reopen and the market will see some deals start to come next week.

“We need the secondary market to find its footing for the primary markets to get moving,” Brett said.

Others believe the stabilization in the municipal market this week is more a function of all the selling by funds in response to last week’s fund outflows than it is of the Fed’s program.

“It is very well possible that following the correction we have seen in the equity and fixed income markets, investors are looking more closely at credit and are feeling more comfortable with municipal bonds than they do with other credit products,” he said Tuesday afternoon.

That would help explain the slowdown of outflows from funds; the selling not causing such a liquidity issue; and the market stabilizing as a result, according to Citroen.

Meanwhile, Brett said “taxables have widened out significantly, when you got absolute yields of 5% — much higher levels than where we were before the virus.”

He noted that before COVID-19, “significant real money demand did materialize — here in the U.S. and from overseas accounts.

“Every deal we are scheduled to price is still day-to-day and watching the market,” he said.

John Heppolette, head of municipal finance and markets at Citi, said that the healing process in munis will take some time, unless retail starts piling money back into municipal mutual funds.

He added that there are two offsetting factors for how issuance will play out post-crisis.

“How much incremental borrowing will be needed to fight this pandemic and on the flip side, how many of these transactions are rate sensitive?”

Munis were stronger on Refinitiv Municipal Market Data’s AAA benchmark scale, as the yield on both the 10-year and 30-year muni GO were lower by 20 basis points to 2.59% and 3.17%, respectively.

“I think the short end, which was most impacted by selling the past two weeks, is leading the charge thanks to Fed measures and proposed stimulus hopes and that is having a trickle-down effect to the rest of the curve,” said Greg Saulnier, managing analyst, U.S. municipal bonds at Refinitiv. “It’s also a story of gross yields now which have attracted cross-over buyers. I think yesterday participants found transaction-able levels and they are building upon those today with buyers showing a willingness to engage thanks to yields, stimulus hopes, and a lack of supply for the past week and a half.”

“The curve continues to steepen, now over 100 basis points from one- to 30-years,” ICE said in a market comment. “However, secondary trading volumes remain good. Muni percent of Treasury yield are declining today, but still remain at extremely elevated levels.”

ICE reported that high-yield munis were also better, with bonds rallying five basis points generically across all sectors. Taxable yields were moving with Treasuries with yields up five to 10 basis points.

Stocks were back in the green in a big way on Tuesday and Treasury yields were on the rise.

John Mousseau, president and chief executive officer at Cumberland Advisors in Sarasota, Florida, said that investors “aren’t as willing to hit distress bids today. People actually care somewhat today,” he added. “We will see if there is any follow through tomorrow.”