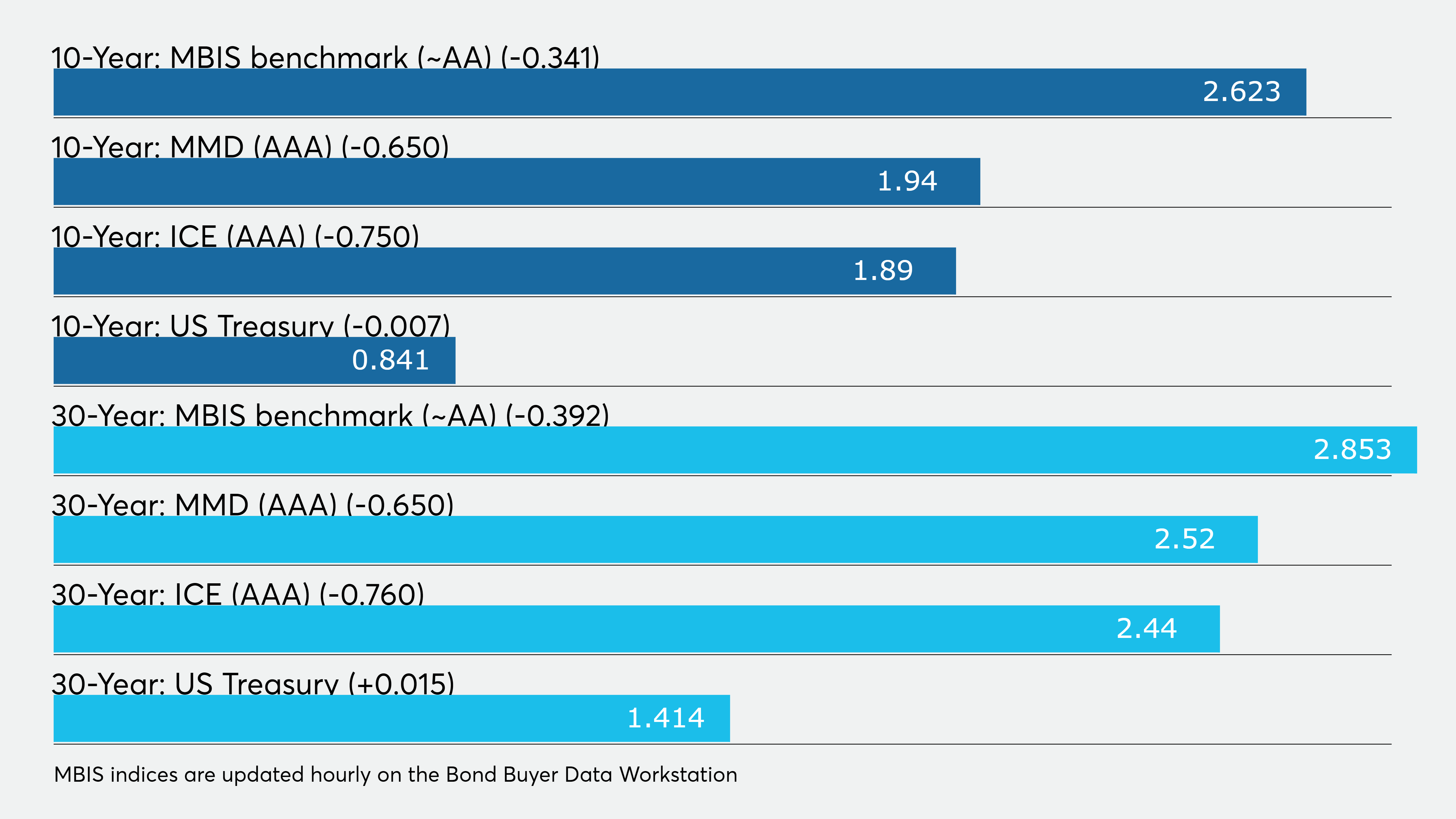 The municipal market experienced an enormous rally Wednesday, swiftly reversing from the pronounced sell off it had experienced over the course of several wrenching, dislocated trading sessions due to the effects of the coronavirus.

Municipal benchmark yields were lowered by 60 to 80 basis points across the curve. Some trades pointed to nearly a 1% bump on short-term paper.

The short municipal market, including the VRDN market, largely has stabilized.

PUT bonds were trading 100 basis points tighter than Tuesday and front-end yields have declined from a “3 handle to 1 handle in the just the past few sessions, reversing the meteoric rise in yields last week,” according to ICE Data Services. The Fed’s actions to buy short-term munis clearly is having a meaningful impact on this market.

Market participants took the signal that the Federal Reserve would be authorized to purchase all types of municipal bonds under the $2 trillion package the Trump administration has agreed to with the Senate. However the moves the Fed took on Monday to include variable rate demand notes had already started the rally.

This all came as ICI reported more than $20 billion of outflows Wednesday, largely surpassing previous outflows.

Other trades showed how rapidly the market was moving to lower yields:

The market moved with the realization that the Fed was here with liquidity.

“In our view, expanded Fed support for the municipal bond market as part of an unprecedented, more broadly-defined open-ended quantitative easing program (including the kitchen sink) should provide an important facility that would help to ensure the availability of adequate liquidity at a time of historic market and economic disruption when many municipal governments are struggling to balance their essential service needs against swelling coronavirus-related healthcare spending requirements,” said Jeffrey Lipton, managing director and head of muni research and strategy at Oppenheimer.

Lipton said that while it is difficult to define newly authorized Fed capabilities in simplistic terms, the U.S. is now going through an atypical recession that requires atypical Fed intervention.

“Whether or not the Fed’s new-found authority for munis can stem the massive liquidations from mutual funds and ETFs for an extended period — only time will tell, but we are optimistic,” he said. The government and Fed measures, they believe, “will bolster muni market and credit conditions and we can expect tax-exempt yields to make valid attempts to retrace part of their recent advances, but with directional volatility and an unlikely return to their historical lows (although they could be tested) any time soon.”

He said the market would also expect the pace of outflows to abate with possible inflows. And further, the market could anticipate a primary calendar build given the growing backlog of deals. With that would come “a more orderly secondary business with continually improving price discovery and a stronger bid-side.”

“Professional investors seem to be more focused on the relative value proposition as more reasonable clearing levels and better price discovery have moved into sight,” Lipton said. “We are now seeing more bidders with a firmer tone on retail bid-wanted lists and dealers are becoming more assertive with the buy-side for a welcome change. “With a healthier tone, munis could demonstrate better relative performance against UST.”

Ryan Swift, US Bond Strategist at BCA Research echoed some of those sentiments. The Fed measures to mitigate the negative impacts of a credit shock to the market has been evident.

“The Fed has set up facilities to back-stop commercial paper and short-maturity municipal debt. It also announced yesterday morning that it will, in conjunction with the Treasury department, enter the investment grade corporate bond market out to the 5-year maturity point, effectively back-stopping a large portion of corporate issuance,” Swift said. “The Fed is also directly purchasing large amounts of Agency MBS in an effort to tighten the spread between the mortgage rate and Treasury yields.”

He also noted that the Fed’s measures to guarantee some risky debt can help solve some problems related to a credit shock.

“For example, if Fed purchases increase asset values for corporate and municipal bonds, then it lessens the risk of bankruptcy both for the issuing firms and for any systemically important investment fund that may be levered to those markets,” Swift said. “However, Fed purchases do not guarantee that stressed firms will be able to take out new debt, nor do they prevent firms from cutting payrolls in the face of lower demand. Only direct cash bailouts from the government can fix those problems.”

He added that the Fed could also implement a “funding for lending” scheme similar to what the Bank of England has done.

“These measures, along with what has already been announced, will help ease the credit shock at the margin.”

Ultimately, he said, cash bailouts from Congress to firms and state and local governments will be required.

It’s quite clear that cash help is likely coming via the potential deal announced by the Senate and the Trump administration.

However, in municipal market terms specifically, history has a way of repeating itself and some sources note that part of the problems the short-term market experienced since this virus crisis began is that banks have downsized their municipal departments and those departments are mostly siloed within the banks. They should, sources said, be using their balance sheets — which are larger than 2008 because 2008 was a crisis of actual bank illiquidity.

But this is a health crisis that is unfolding and will result in major revenue collection disruptions, downgrades of municipal credits — the New York MTA — and result in issuers having to freeze certain revenues and ask its agencies to make immediate cuts. Rating agencies are starting to put sectors on watch for downgrades, including Moody’s action Wednesday, which put U.S. ports’ outlook to negative from stable.

Some said some historical perspective is necessary to understand how the short-term sell-off happened and why it matters to this market.

“The biggest problem when this market goes through this big of a dislocation, this type of crisis, everyone wants cash. ‘We’ve got to buy this, we’ve got to sell this.’ And banks need to shore up their balance sheets. And they don’t want this short-term paper sitting on their balance sheets. It’s essentially a concierge market. ‘We’ll buy this portion of the market for you so that we can manage the long-term deals that you need to get done’,” said Barnet Sherman, founder, senior managing partner, at Tenbar Capital.

“The Fed is doing what it’s supposed to be doing; it’s the WD40 of the capital markets. But it’s not economics. It’s enabling practices, specifically in the municipal short market, that only become self-perpetuating. The money market in the munis is the equivalent of maintaining your 8-track player because you like the sound. There were lessons to be learned from 2008 and clearly the past two and half weeks have shown they weren’t learned.”

Munis were stronger on Refinitiv Municipal Market Data’s AAA benchmark scale, as the yield on both the 10-year and 30-year muni GO sunk by 65 basis points to 1.94% and 2.52%, respectively.

“Now that the Fed has provided liquidity and banks feel as though they are backstopped with the support of the stimulus bill, it appears that this has freed up would-be buyers to participate in the muni market again and they are doing so with a fervor today,” said Greg Saulnier managing analyst at Refinitiv.

“Municipal / Treasury spreads remain extremely elevated and that’s not surprising given the large costs and loss of tax revenue that state & local governments face,” Swift said. “The Fed’s back-stopping of short-dated muni debt through its Money Market Mutual Fund Liquidity Facility will help tighten muni spreads a bit. It will help even more if the Fed expands into longer-maturity municipal bonds, as it has done with corporates.”

But Swift added that ultimately, all the Fed can do is try to lower borrowing costs.

“It can’t clean up state & local government balance sheets. Fiscal support is required for that,” he said.

Stocks were still the green again Wednesday and Treasury yields were mostly lower and the three month was in negative yielding territory.

It was the third week in a row of outflows, with each week the outflow was larger than the last. This has happened after what had been 60 straight weeks of inflows into the tax-exempt mutual funds reported by ICI. The previous week, ended March 11, saw $3.072 billion of outflows. 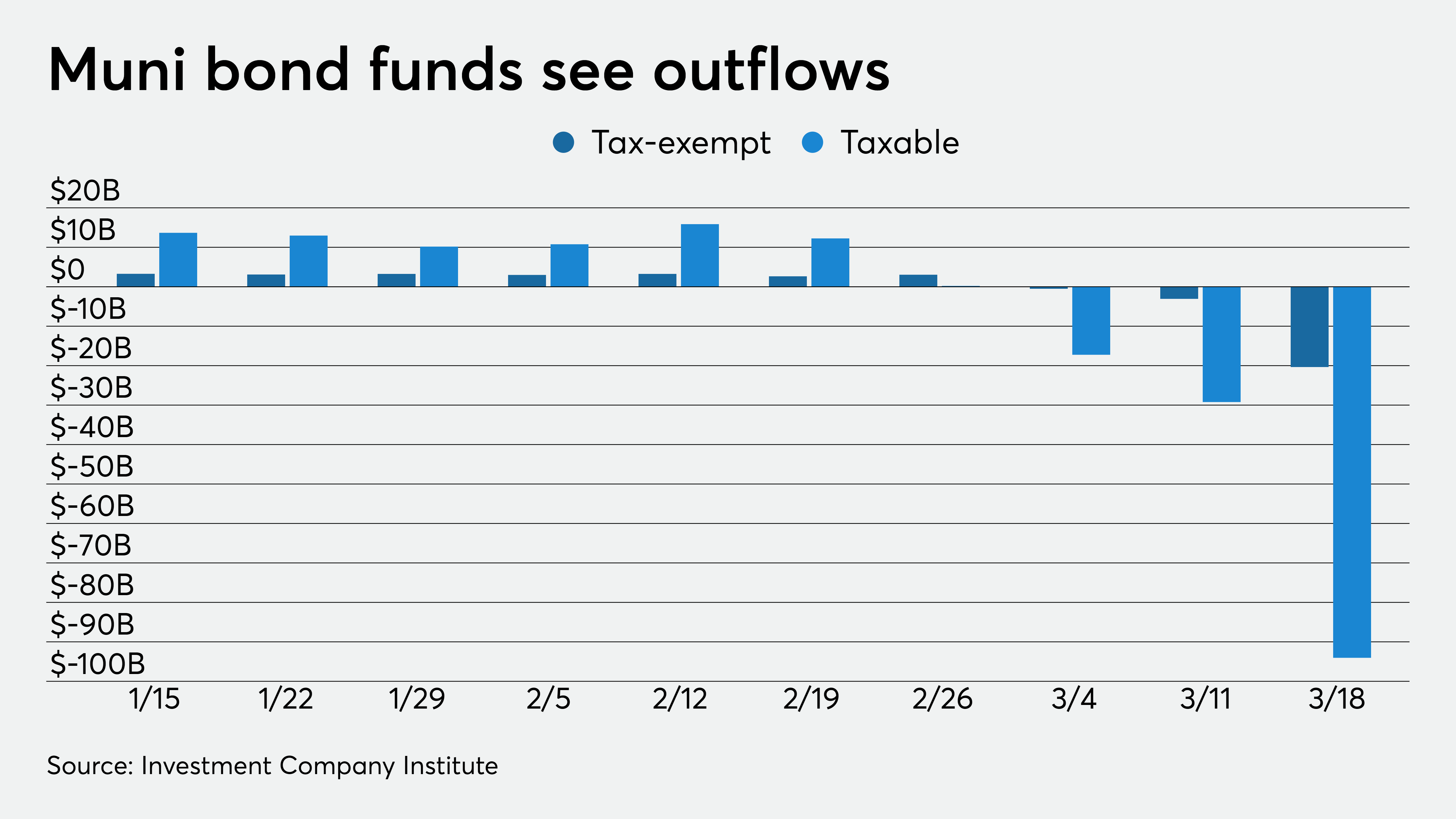 ICI said the total combined estimated outflows from all long-term mutual funds and ETFs were $153.112 billion after outflows of $19.721 billion in the prior week.