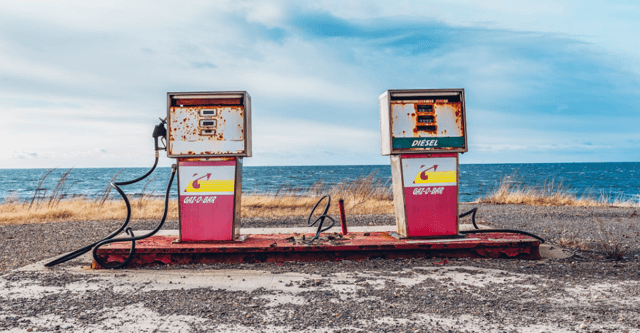 As I’ve discussed in recent articles, the main area where I see buying opportunities today is not stocks; it is commodities. Most are at a decade if not multi-decade lows and are at a 40%+ discount to their price just weeks ago. The U.S. is about to launch a $2T stimulus package, not to mention ‘unlimited QE.’ This is in the face of fundamentally a supply issue. Yes, demand for commodities will fall, but mining production is collapsing and evidence suggests the same will occur for energy.

Quite frankly, I believe such a buying opportunity for commodities is once-in-a-lifetime. Most importantly, investors must actively look to hedge against a rapid decline in the U.S. dollar.

One commodity that is extremely cheap today is Gasoline which can be bought under the United States Gasoline ETF (UGA). As you can see below, UGA tracks RBOB quite well. Even more, RBOB is currently 50% below its 2008/2016 bottom:

There are a few reasons for these declines, some liquidity-related and other fundamental. Obviously, demand for gasoline is likely to crash over the coming weeks and months as Americans refrain from driving. The flow of crude oil will likely continue which would cause a buildup of gasoline without the proper capacity to store it. Of course, there is also a general lack of market liquidity and a “race to the exits” among managed money long holders.

I’ve been buying UGA heavily over the past few days during its decline. While gasoline futures can theoretically go lower, oil refiners are likely to drastically cut production as most cannot turn a profit with gasoline at this level. Even more, some U.S. miners are already voluntarily shutting down in order to stop COVID-19 spread among workers. This gives us a signal that declines in demand will likely spur similar declines in supply, likely to the benefit of gasoline prices.

A Closer Look at The Gasoline Market

Gasoline usually has a very low shelf-life with usually less than a month worth of supply being stored or about 230 MB. As you can see below, the last EIA report’s stocks were in line with last year’s data: 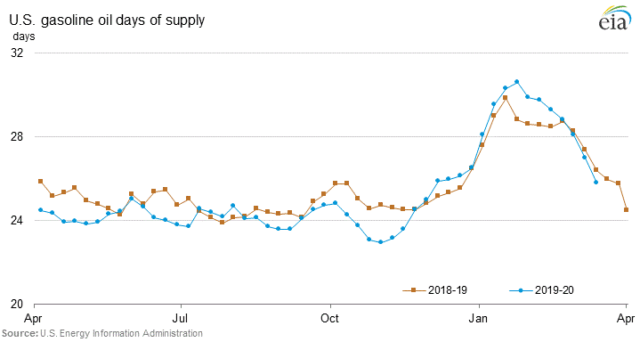 Similarly, consumption of motor-oil gasoline is similar to that of last year with the last release being on March 18th: 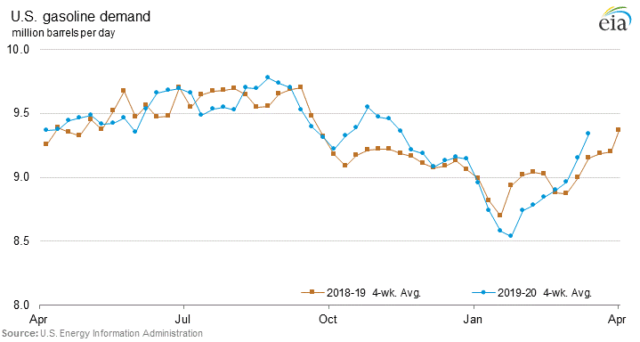 This shows that demand for gasoline had actually not declined this month. Obviously, the transportation impact of COVID-19 stay-at-home orders will likely come into effect this week and weeks after, but this is a preliminary signal that the futures market is overreacting.

As I mentioned earlier, the market also does not seem to be accounting for likely refinery production cuts. U.S. refiners are already running low on money and now there is a significant decline in profits due to the drop in prices. Although production is “essential,” it is also likely that many workers will opt to stay home to avoid catching the virus. Exxon (XOM) recently cut production by about 440,000 BPD in its Baton Rouge refinery. Marathon (MPC) and Phillips 66 (PSX) cut production at their major LA refineries as well. If production cuts continue to expand, the glut could quickly become a shortage. 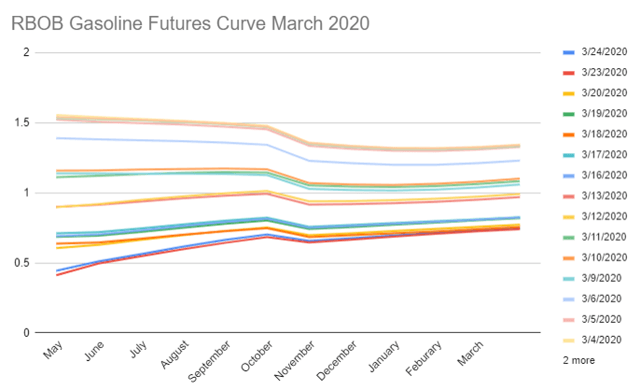 Since gasoline today is selling at a significant discount to its price a few months from now, it is a sign that the market is concerned with a temporary glut. Theoretically, those with storage capacity can make a large return by buying at today’s price and selling fall futures. Unfortunately, this is a cost that UGA investors have to pay for being in the position and futures are rolled at higher prices. That said, it is also a sign that the near-term market is extremely oversold.

Importantly, the managed-money segment of the RBOB futures market lacks short-sellers. As you can see below, there have been few short-sellers and a large number of long positions over the past few years:

This is a perfect example of why a healthy market needs short sellers. If all speculators are long and are selling, they’ll all race to the bottom as they try to cover their positions. If there were more short-sellers, they’d likely be looking to take profits to buy back to cover.

This seems to be a problem today in most commodity markets where long-only ETFs and hedge funds make up a significant speculative market share. From what I can tell, this has significantly exacerbated the sell-off in most commodities over the past week, but more in gasoline than most.

In my opinion, UGA is a great buy today. While gasoline may temporarily remain at $0.50, it is highly unlikely to stay there for long as supply declines to meet demand and to correspond with storage availability. The same is true for crude oil, but the supply of crude cannot change at the same pace and it appears that gasoline is more oversold than crude.

Another significant decline in gasoline is extremely unlikely; however, the roll costs of UGA are problematic and are the biggest risk. If the futures curve remains exactly where it is today next month, UGA must buy higher-cost futures which will slide lower and pull the ETF lower. Fundamentally, this is to compensate those willing to store gasoline today.

This could bring UGA 10-20% lower in short order. However, I believe that the curve will quickly stabilize with a production slowdown and a potential less-than-expected drop in gasoline consumption. I believe that gasoline will rise to at least $1 over the coming few weeks/months which should bring UGA 70% higher after roll costs.

Importantly, UGA currently has $17M in AUM and has seen bid/ask spreads widen over the past few weeks. I believe liquidity will return to the fund as the market stabilizes, but limit orders are a must and large investors should expect to see slippage.

My fellow contributor BOOX Research and I run the Core-Satellite Dossier here on Seeking Alpha. The marketplace service provides an array of in-depth portfolios designed using the academically-backed Core-Satellite approach. This involves creating a base long-term portfolio (the core) and generating alpha using unique well-researched tactical trades (the satellite). 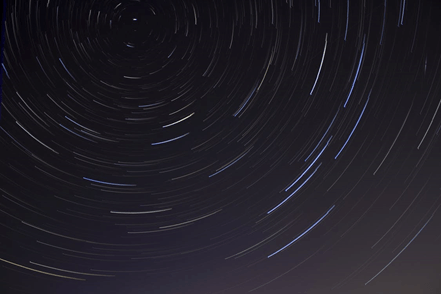 As an added benefit, we’re allowing each new member one exclusive pick where they can have us provide in-depth research on any company or ETF they’d like. You can learn about what we can do for you here.

Disclosure: I am/we are long UGA. I wrote this article myself, and it expresses my own opinions. I am not receiving compensation for it (other than from Seeking Alpha). I have no business relationship with any company whose stock is mentioned in this article.