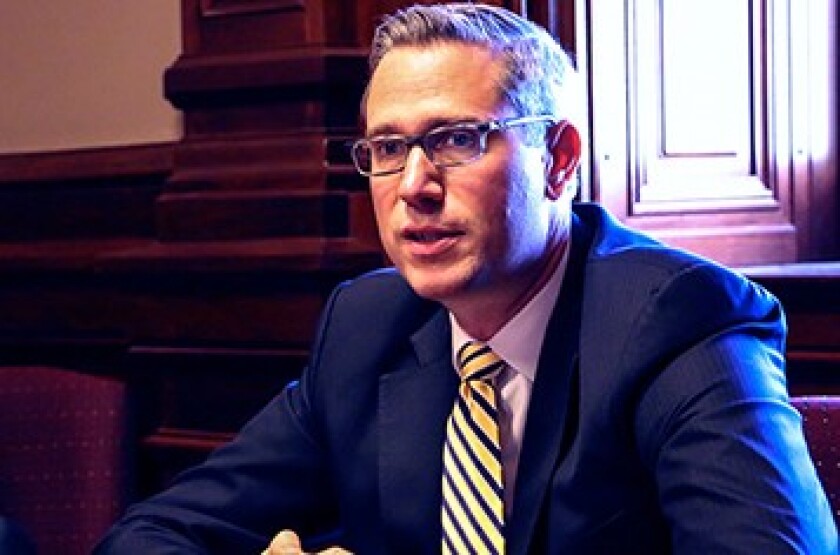 Illinois’ liquidity is being tested as the state grapples with revenue losses, emergency spending and delayed income tax payments that have muddled the budget picture and prompted worries of longer term fiscal strains due to COVID-19.

The state is awaiting help from the $150 billion earmarked for state and local governments in the $2 trillion federal relief package making its way through Congress and Gov. J. B. Pritzker said Thursday that the bill will help the state continue funding services.

Illinois has little cushion with just $59 million in its rainy day fund as of Thursday and an ending balance of just around $100 million expected when this fiscal year ends June 30.

The general fund held $491 million on Thursday and the state’s unpaid bill backlog stands at $7.7 billion and could swell in the near-term as it did during a two-year budget impasse.

But the state also has access to billions in surplus funds held in non-general fund accounts and Pritzker sought to allay cash flow concerns this week by outlining some near-term actions.

Treasurer Michael Frerichs said the state’s $14 billion cash portfolio can’t be invested in stocks, so it hasn’t suffered with the Dow’s fall, and his office has “taken steps to reduce volatility, preserve capital and maintain liquidity in our state portfolio. This includes reducing the average length of our investments.”

“We will move expeditiously to bring every possible federal dollar to Illinois,” Pritzker said Wednesday. The Senate passed a relief bill Wednesday and the House is expected to cast its vote Friday. President Trump said he would immediately sign the package.

Fitch Ratings’ analysts cautioned on a webinar Thursday about local and state governments that the federal help will aid with coronavirus-driven expenses but doesn’t cover revenue losses. Illinois and its local governments are in line for $4.9 billion in direct relief, according to information posted on the National Conference of State Legislatures.

That includes $2.7 billion for states and $2.2 billion for local governments. The figures don’t include emergency funds in the package the state can additionally benefit from for education, disaster and healthcare spending.

While Pritzker and his administration are focused on addressing the near-term demands of helping hospitals obtain needed equipment and providing relief to shuttered businesses and residents who have lost income, the current budget and proposed $42 billion fiscal 2021 general fund plans face revision.

The final toll remains uncertain as a prolonged recession could pound the state’s balance sheet and the legislature’s Commission on Forecasting and Accountability laid out scenarios based on past recessions that warned of the potential for multi-billion dollar revenue shocks.

The state on Wednesday delayed its April income tax filing deadline to July to match the federal government, one of the measures Pritzker said was needed to “protect our residents, workers, and small businesses as they navigate this extremely challenging time.” He said the tax filing delay won’t force any delays in spending on “critical” or “vital” services.

Illinois typically records its strongest income tax collections in April taking in between $1.5 billion and $2 billion of personal and corporate income, said Jim Muschinske, revenue manager for the legislature’s Commission on Government Forecasting and Accountability.

“While extending the state’s tax filing deadline to July 15, 2020, creates some needed relief for taxpayers, it also results in a significant delay in revenue for the state in the short term,” sje said in a statement. “In addition to the short-term revenue delay, given the COVID-19 crisis and necessary emergency response, we, like the rest of the country, can anticipate a future loss in revenue from lower payroll and sales tax receipts this fiscal year.”

The state’s overdue bills are closely watched by the rating agencies as a barometer of the state’s fiscal ills, along with a $137 billion pension tab. It hit a high of $16.7 billion in 2017 as a result of the two year budget impasse. The state closed out the last fiscal year at a recent low of $6 billion, started the calendar year at $6.2 billion, and the backlog stood Thursday at $7.7 billion.

The treasurer’s office rolled over $200 million in investment notes used to pay down state bills under an up to $2 billion program that allows for state investments to go to the comptroller for bill payment at low interest rates and discussions are continuing “ways to support the state’s cash flow using the legal tools we already have,” Frerichs said.

Illinois’ BBB rating underscores that the state is “more vulnerable” to the challenges posed by COVID-19 and the decision to extend the tax deadline like many states are doing “will certainly create some liquidity pressure for them” but the state has access to cash in non-general fund accounts if needed, Fitch analyst Eric Kim said on the webinar.

COGFA expects to update the fiscal 2020 and 2021 budget projections later in the spring and said the virus’ impacts are just too difficult to measure. “Obviously the economy is not a light switch, so whatever effects have occurred” could linger, Muschinske said.

COGFA moved up the publication of its annual three-year forecast to this week from later in the spring. “These are unchartered waters and we felt with the changes hour to hour in the economic situation we should put something out” based on current baseline revenues, Muschinske said. “We are not saying ‘this is what is going to happen;’ it’s just a view of what it would look like” in several scenarios including a worst-case one.

During the Great Recession, state general funds fell a combined 8.7% between fiscal 2008 and fiscal 2010 with the big three tax revenues falling a combined 16.5%. The commission estimates that if Illinois were to experience another severe recession, the decline in total receipts could reach 11% or $4.5 billion over multiple fiscal years.

During the recession in the early 2000s, overall tax revenues fell a combined 5.5% from fiscal 2001 to 2003 with income tax and sales tax fell 5.7% during this time frame. The Commission estimates a similar recession could drive a $2 billion decline over multiple fiscal years.

COGFA cautions that scenarios due to the COVID-19 impact are difficult but given the expectations of a global recession it’s “reasonable to offer a scenario with more devastating impacts on revenues in the near-term than” those of the Great Recession. Under a “peak-trough” revenue decline of 20% the state could see an $8 billion decline over multiple fiscal years, COGFA said.

The COVID-19 blow will “go beyond just the operating checkbook of the state,” Muschinske said.

Revenues could see a prolonged downturn and could influence the $45 billion capital plan while stock market volatility clouds the state’s pension ills given the system is just 40% funded and payments aleady currently consume about one-fifth of the general fund. The state carries two ratings one notch above junk and a third two notches in investment grade territory.

“Without a dramatic bounceback of investment markets, 2020 pension investment losses will mark a significant turning point where the downside exposure of some state and local governments’ credit quality to pension risk comes to fruition because of already heightened liabilities and lower capacity to defer costs,” analyst Tom Aaron said in a Moody’s Investors Service report this week on local and state government pensions.

The state’s capital plan relies on nearly $21 billion in borrowing that relies in part on a doubling of the motor fuel tax to 38 cents per gallon but that revenue stream is being hurt by dwindling travel as a result of the outbreak. The plan also relies new casino revenue from a gambling expansion. Casinos are currently closed and a recession could hurt future growth.