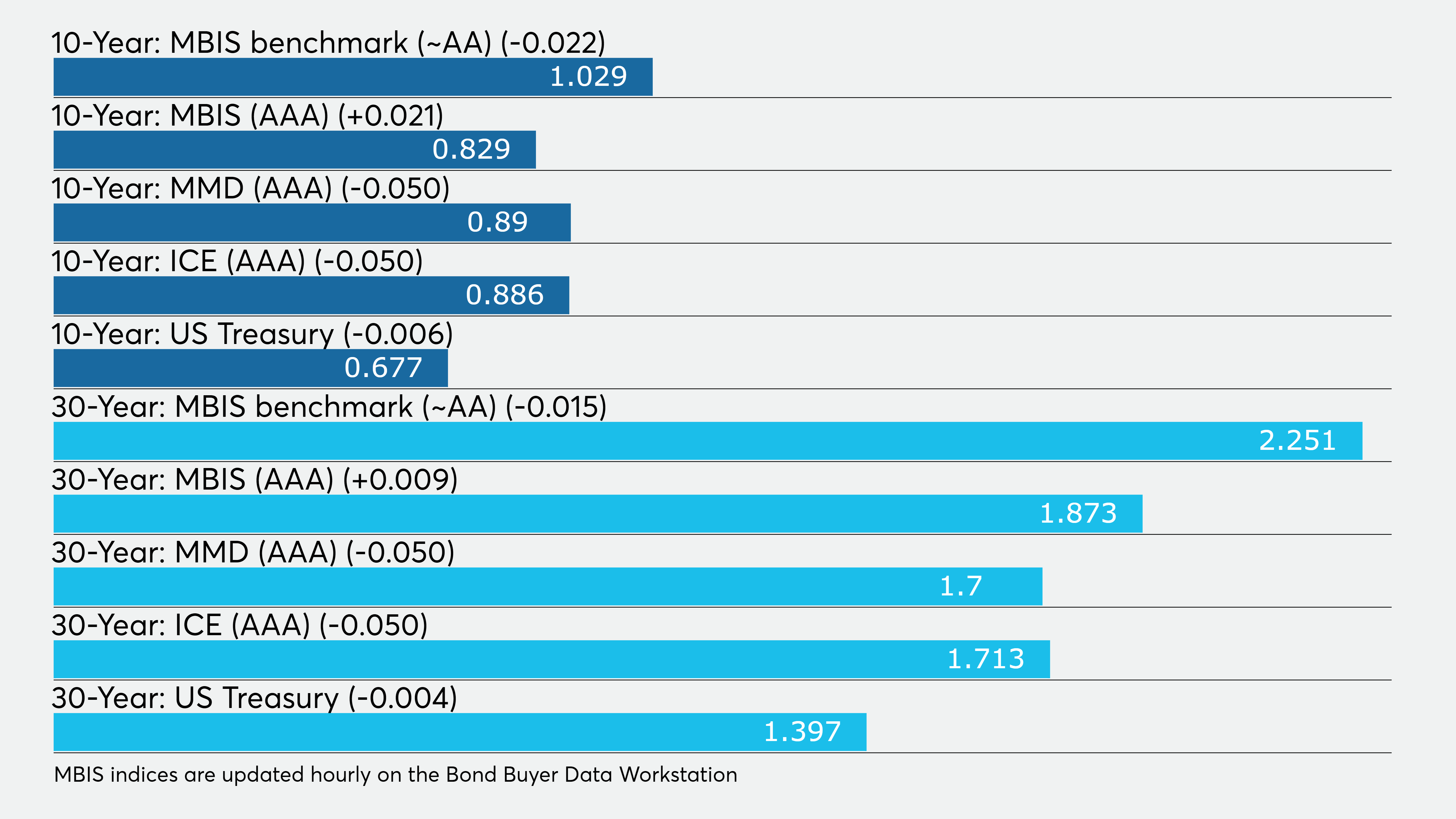 Municipal bonds continued their descent to lower yields Thursday, declining at least five basis points across the curve while the short end continued its rally.

The one- to three-year yields are reaching near-record lows, calling into question how far they can drop before investors start backing off. A decent crossover trade from taxable bond sectors into the municipal market has already begun.

Meanwhile, funds and retail don’t seem to be backing off as of now. Refinitiv Lipper reported a $1.84 billion inflow to municipal bond funds in the week ended May 20 after a $582 million inflow the previous week.

“The front end of the municipal bond curve continues to plunge into uncharted waters,” ICE Data Services said. “The one-year yield on the ICE muni curve is four basis points lower today to 0.18% … the muni percent of Treasury yields is moving closer to 100% in the one-year, down from over 600% one month ago.

In the span of a week, one- to five-year high grades have rallied as much as 25 basis points while the major spots past this range are lower by about 10 basis points.

“Such a fast move down in yield is likely to bring a more measured response from some buyer constituencies than a comparable rise in yield given where absolute rates sit,” Olsan said.

Meanwhile, Municipal Securities Rulemaking Board data showed that during Wednesday’s session retail trades jumped the greatest in the 16-20 year range (up 27% from the 30-day average) while block trading spiked 39% inside five years.

“Interestingly, trades above $1 million par value were up 35% in 16-20 years where the curve maximizes yield opportunities,” she said.

Municipals continued to outperform in the backdrop of an imbalance of supply and demand with rates close to their pre-pandemic levels with a holiday-shortened week on the horizon, a New York trader said.

“It’s a bond grab without any bonds,” he said Thursday afternoon. “There is a reasonable amount of money and confidence at these levels.”

The thin market and insatiable demand is what is driving the market, as new issues have been swallowed up — many oversubscribed — and now trading up 20 basis points, the trader said.

“The market is very strong right now with a lot less bonds around,” he added. “Right now, it’s seemingly all about supply and the lack of it,” he said, adding that next week’s new-issue calendar should have no trouble finding buyers.

“We continue to outperform every day,” he said. “There’s not enough supply and it’s pushing levels within 30 basis points of recent lows and it’s almost as if the past three months didn’t happen.”

The short-end of the yield curve continues to see strong demand — especially inside five-years — where yields are hovering below 0.20% on triple-A paper.

Though some investors are scratching their heads at those levels, he said plenty of other traditional buy-and-hold accounts are putting money to work.

“These are real buyers, not trading accounts. The appetite from real money is there and it looks like it will continue with next week’s calendar,” the trader said.

Judging by this week and last week’s demand for new issues — there should be just as much post-holiday appetite.

“Some of the deals people were concerned about this week and last, the market chewed right through them, and they are trading up 20 basis points,” he said, pointing to deals from Connecticut, the New York Transitional Finance Authority, the New York Power Authority and Illinois.

“There is not much fear in the market at all,” he said.

The rates are helping issuers and underwriters bring much-needed current and future supply to an eager market, according to the trader.

“Underwriters four weeks ago were worried and questioned when they would be able to bring a new deal, but with these rates, now you can’t bring enough,” the trader said.

“With these low rates and market appetite you are going to see a lot of stuff pop up and come to market,” he added.

Morgan Stanley won the deal with a true interest cost of 2.0294%.

PFM Financial Advisors was the financial advisor; Miller Canfield was the bond counsel.

Davenport & Co. was the financial advisor and Nixon Peabody was the bond counsel.

Munis were also stronger on the MBIS benchmark scale, with yields falling in the 10- and 30-year maturities. 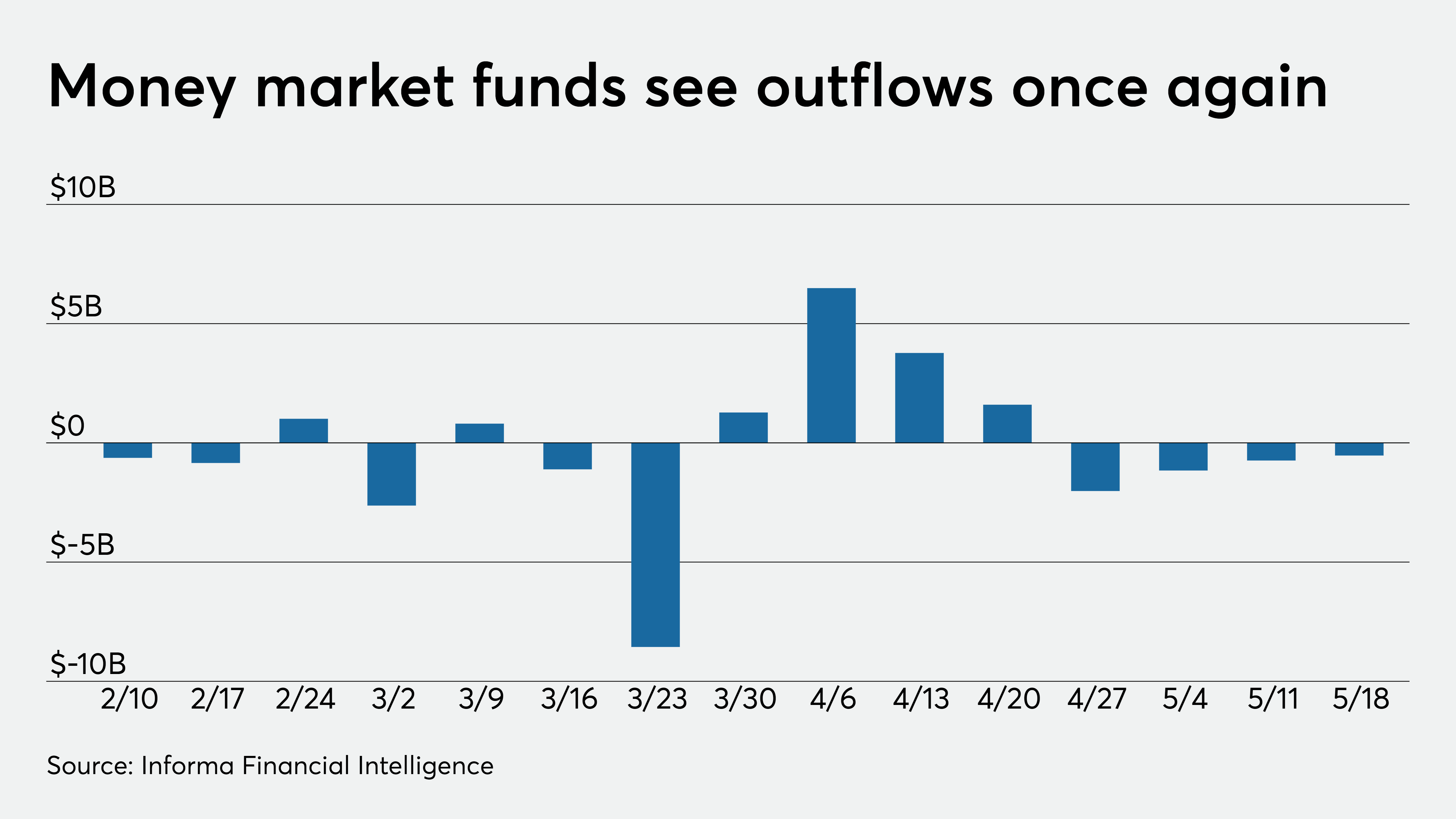 The average seven-day simple yield for the 187 tax-free and municipal money-market funds dipped to 0.07% from 0.08% in the previous week.

The average, seven-day simple yield for the 793 taxable reporting funds declined to 0.11% from 0.13% in the prior week.