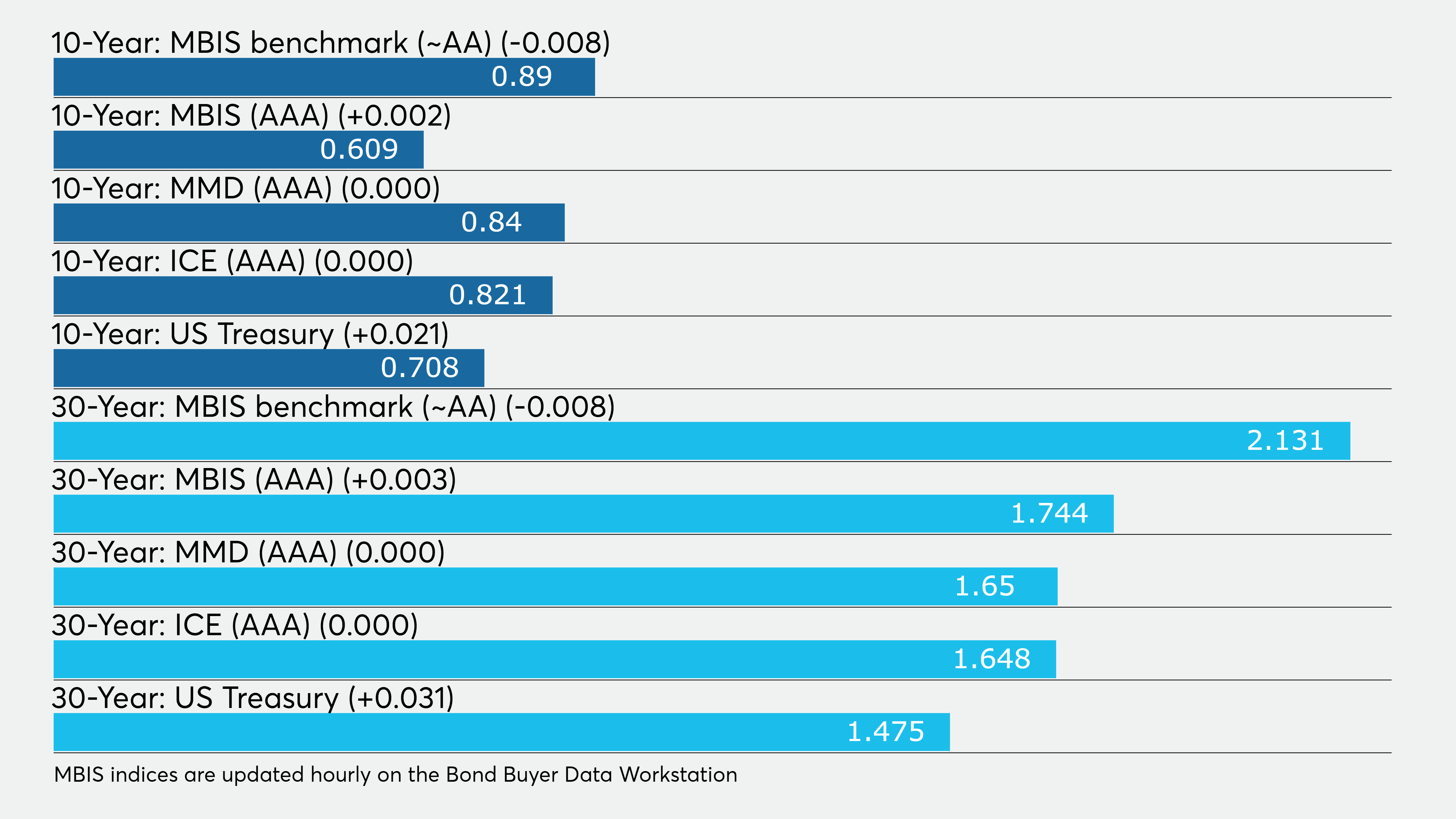 The municipal bond market was steady Thursday amid the pricing of several new issues, including a low-rated Guam Waterworks $134 million deal.

Despite the market’s recent firmness, however, a real sense of caution is coming into play.

Some sources say the municipal market needs to begin pricing in downside risk from the coronavirus-led revenue losses for issuers across the country, and that the market is largely ignoring the potential of real risk of impairments and defaults.

Municipal to U.S. Treasury ratios have been a focus for many participants of late. Historically attractive ratios, low supply, and continued fund inflows are creating some strength in the municipal market.

Refinitiv Lipper reported more than $1 billion of inflows into municipal bond mutual funds, but there are still concerns and challenges facing the buy-side community, according to sources.

The continued inflows will exacerbate the lack of issuance with the arrival of spring redemption season next week, according to Peter Block, managing director of credit strategy at Ramirez & Co.

“I suspect that the nascent inflow of funds back into the market will help the sectors which have underperformed recover some performance and for municipal to Treasury ratios to fully normalize,” Block said.

This will be just in time for seasonal maturities and calls, which he expects will “overwhelm supply, creating tight conditions similar to early March.”

Thursday’s market continued to show the presence of both safety and scarcity in the tax-exempt market, according to Block.

“We expect resistance to emerge, but we are not sure when, and we are especially watching the very front end of the curve where yields are trending near 0% on particularly heavy demand, yet ratios remain attractive,” according to Jeffrey Lipton, managing director, head of municipal research and strategy municipal capital markets at Oppenheimer & Co.

“Confidence is lending support to the muni market, but we must be mindful of potential sticker shock, even against a backdrop of historically cheap ratios offering compelling relative value that extends to corporate bonds.”

Secondary trades showed as much:

Block noted that tax-exempt volume has been noticeably low as the corporate investment grade market, assisted by Federal facilities, has prompted many municipal issuers to issue taxable bonds instead of tax-exempt — both for new money and advance and current refundings.

Taxable issuance at 35% of total municipal issuance year-to-date has created scarcity in the tax-exempt space, according to Block.

“Combine this with the fact that tax-exempts had lagged Treasuries so significantly since March, investors are coming back in droves,” he said, pointing to fund inflows over the last three weeks.

“General obligation and utilities had significantly outperformed healthcare, higher-education, and infrastructure/transportation during this COVID-19 event as investors have sought relative safety of governments ability to levy taxes and essential services,” Block said.

Meanwhile, for the issuers and dealers using the Fed’s Municipal Liquidity Facility, the Municipal Securities Rulemaking Board Thursday proposed a rule change with the Securities and Exchange Commission to temporarily waive market activity fees for transactions for the Fed’s MLF under its Rule A-13 for broker-dealers facility those MLF transactions. No issuer has yet accessed the MLF of yet, though Illinois has it in the works to do so.

For the credit picture, it’s not necessarily about what will happen but when the market realizes the future of state and local finance is going to be hit hard.

Right now, during the June/July/August 1 muni redemption period, it just isn’t being priced in.

Many issuers are exposed to the uncertainties surrounding the economic suspension, with so many shifting to crisis mode as they are trying to revise revenue forecasts while holding the line on their fixed costs, Lipton said.

“Current yield levels continue to provide fertile ground for market entry, but for a large part of the issuer community, there are overriding concerns tied to credit, liquidity and specific capital plans,” Lipton wrote in a May 27 weekly municipal report.

Lipton added that issuers selling new debt have brand recognition or demonstrate need for new money or refunding, but others are facing challenges that may prevent them from accessing the market ahead.

“We suspect that various issuers are unsure of their ability to retain current outlooks and ratings given the current environment,” he said.

Hospitals, higher education issuers, and airports are among the sectors facing the most pressure and challenges amid the COVID-19 crisis — from loss of revenue and additional costs due to new safety procedures to overall uncertainty — and may contribute to the absence of issuance going forward.

“Under these conditions, seasonal reinvestment demand may not encounter sufficient supply and so technicals may outweigh credit considerations as the market driver for a while longer,” Lipton wrote.

Meanwhile, despite the historically attractive municipal to Treasury ratios, underlying uncertainty continues to overshadow the recent investor confidence, according to Lipton.

Overall, the market stability is not without concern or uncertainty, however.

“We are constructive on the asset class, yet we remain unsure of continued market momentum,” Lipton wrote.

Historically cheap ratios are helping form market sentiment, Lipton said, as municipal yields move closer to 1% throughout more of the curve and the benchmark 10-year is now under 1%.

“Muni bond yields have hit a wall today,” according to ICE Data Services, which said yields on the ICE muni curve were little changed.

Munis were also flat on the MBIS benchmark scale, with yields steady in the 10- and 30-year maturities.

Davenport & Co. was the financial advisor; Nixon Peabody was the bond counsel.

Proceeds will be used to fund capital projects and refund certain outstanding bonds for savings.

Siebert Williams Shank with Barclays and Raymond James as co-senior managers is set to price the bonds on Tuesday June 2 after a one day retail order period on Monday, June 1.

Illinois-based OSF Healthcare heads into the market with first coronavirus-era deal
Snowflake buyers beware: IPOs that doubled have poor track record after that debut
Microsoft unveils Azure Orbital, competing with Amazon to connect satellites to the cloud
Op-ed: Tech correction was a worthwhile test for the market, which now looks more reasonably valued
Snowflake’s first-day pop means IPO left $3.8 billion on the table, the most in 12 years