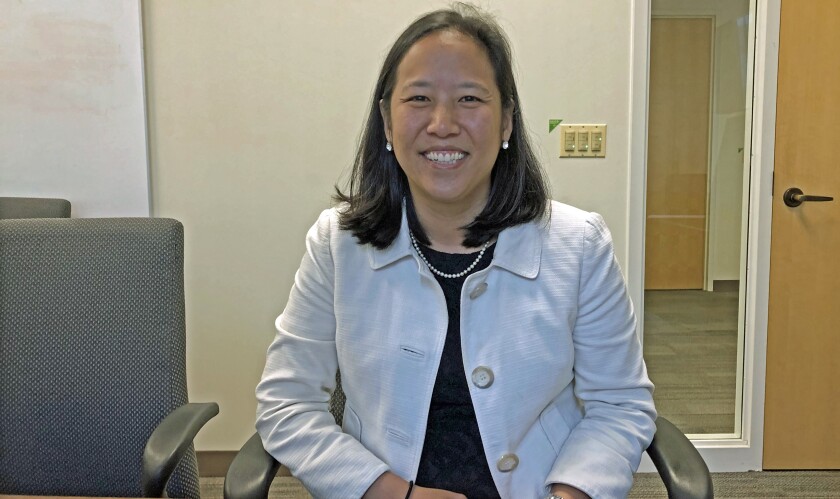 Chicago’s warnings about the impact of a COVID-induced recession on its budget have grown more somber.

Mayor Lori Lightfoot and her finance team are stressing that the gap remains guesswork but the 2021 hit is substantial after accommodating the 2020 tax blow and the city’s options will be limited as it seeks to avoid tax hikes and job cuts and as federal relief to offset state and local government tax losses remains stalled.

The city believes it can cover appropriated expenses for 2020 but for 2021 “the number is going to be quite large. It could be upward of $1 billion,” Chicago’s chief financial officer Jennie Huang Bennett said on a conference call with reporters Monday during which she was joined by budget director Susie Park. They laid out details on a budget amendment reflecting the city’s allocation of federal dollars for coronavirus-related expenses.

How deep the hole extends heading into 2021 depends on how soon the city’s economy and sales, hotel, restaurant, car rental, and other taxes recover from the shutdown that began in mid-March. The state may add to the city’s woes by pushing its budget pain to local governments through cuts in shared revenues. The city will release its formal 2021 forecast for the budget that begins Jan. 1 in August.

Lightfoot has warned that all options remain on the table but has put a property tax hike and job cuts at the back of the line, arguing the city needs to participate in the recovery by staving off job losses.

Lightfoot warned on Monday that the city will face “really, really difficult or impossible choices” if the federal government doesn’t come through with funding that goes beyond CARES which only provides aid to cover expenses not revenue losses.

Bennett called use of federal funds in the current situation appropriate and not something that would add to the city’s structural challenges. “We are going to need some level of federal funding to help support us during this timeframe which is appropriate,” Bennett said. “What we are facing by way of COVID and the revenue losses….are one time in nature and the result of a one-time event that we would never have expected.”

Gov. J.B. Pritzker has struck a similar tone, avoiding deep cuts to close a $2.7 billion budget in the fiscal year that ends June 30 and relying primarily on borrowing up to $5 billion through the Fed’s short term lending program to match revenues with expenses should the federal government aid not come to fruition. He too has alternatively warned of dire service cuts.

Some local governments and states are cutting to close budget gaps, but Chicago isn’t. Bennett said Monday the city’s liquidity remains sound. The city has more than $2 billion in accessible non-corporate funds available and has a cushion in an unbudgeted $100 million in additional savings from its January debt refunding.

The city doesn’t currently anticipate the need for additional credit lines beyond the $185 million currently has with about $85 million for airports and $100 million for general purposes. The city will tap it for near term capital spending.

Bennett said there are no “imminent” borrowing plans. The team continues to explore the potential use of the Federal Reserve’s new short-term lending program and Bennett did not rule out pension obligation bonds but said no decisions on any borrowing have been made.

Lightfoot’s warnings have grown bleaker over the last month. She initially resisted sounding any alarm bells arguing that the city was well-positioned to manage through the pandemic, that the finance team had prepared for a recession, and that the impact would be muted by the limited reliance on economically sensitive revenues.

Market participants believed the mayor’s earlier position understated the risks given that the sensitive taxes on sales, transactions, transportation, recreation and income taxes add up to 35% of the corporate fund.

The city is in the early stages of re-opening but it will be slow going with tourism, business travel, and conventions.

The reopening of some businesses has also been delayed by vandalism and looting that downtown and in recent weeks amid protests over the killing of George Floyd by a Minneapolis police officer. Lightfoot is facing political pressure to raise social and human services spending to help impoverished neighborhoods.

Lightfoot previously proposed hundreds of millions in new spending in the coming years that will now be harder to fund. She is also being pressured by some protestors to “defund” or cut police spending. Lightfoot has so far rejected that notion insisting it’s not an either-or funding issue for her.

The city has pledged to structurally align its balance sheet by 2022. While saying all options remain on the table, Lightfoot previously pledged not to use asset reserves or to push off pension contributions.

“The sharp economic decline and expected revenue deterioration, along with pressures related to the pandemic, will make the city’s path to structural balance more challenging,” S&P warned when it revised the outlook on the city’s BBB-plus rating to negative from stable in late April.

The city has $30 billion of net pension liabilities and the system is just 23% funded. S&P considers it an “absolute essentiality” that the city honor funding commitments. The 2019 results are expected to post soon.

The city’s general obligation bonds carry a BBB-minus rating from Fitch Ratings, a junk rating of Ba1 from Moody’s Investors Service, and an A from Kroll Bond Rating Agency. They assign stable outlooks.

Long before the pandemic, city officials had warned of potential $1.19 billion and $1.16 billion budget gaps in 2021 and 2022, respectively, on a baseline forecast.

The city is operating on an $11.65 billion all-funds budget that includes a $4.5 billion corporate fund. Lightfoot’s administration closed a more than $800 gap heading into 2020 in what was Lightfoot’s first budget since she took office in May 2019.

The CARES funding provided $470 million in direct city relief for COVID-19 expenses with an additional $46.7 million from a community block grant, both of which the city has some latitude in how it uses to cover COVID-19 expenses. The other funding allocations from CARES are more limited in the eligible uses including $377 million which goes to the city’s airports and $189 million for contact tracing, laboratory testing, and related personnel.

As of Monday, 2,283 people in Chicago have been killed by COVID-19, according to the state health department.

IAU: It Is Time To Buy Gold
More Homeowners Are House Rich As Equity Rises In 2nd Quarter
Three Ways To Tackle Commercial Re-Occupancy In The New Normal
Week’s $12.6B calendar features deals for airports, sports venues
Markets are expected to be choppy, but dip buyers could be looking at tech favorites in week ahead