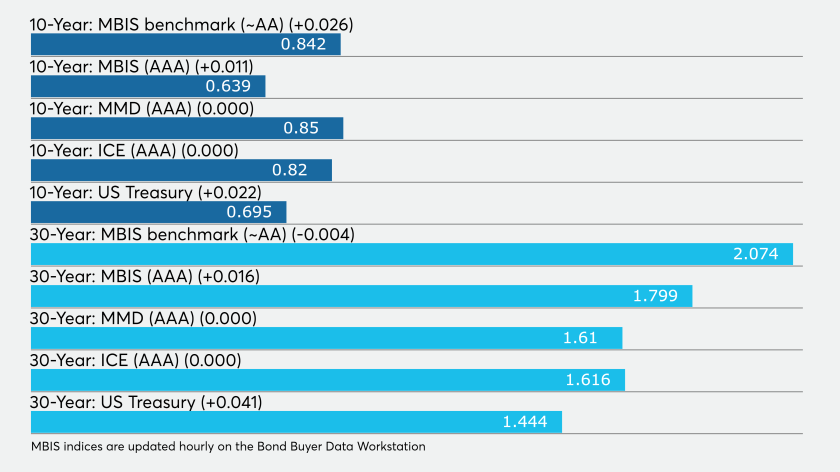 The latest rally in municipal bonds has spurred issuers to come to market, inflating the calendar for the week of June 15 to nearly $12 billion after weeks of low historical supply.

IHS Ipreo estimates total volume for the upcoming week at $11.6 billion, consisting of about $10.4 billion of negotiated deals and $1.2 billion of competitive sales. New York, Texas and Pennsylvania issues headline the new-issue slate.

The buyside took a breather Friday from the brisk activity seen earlier in the week when cash-flush investors wielded their buying power and devoured new deals. Muni yields on the AAA scales were little changed on Friday.

Primary market
There are 25 deals over $100 million on the upcoming calendar.

There is only one competitive issue over $100 million of the calendar.

PFM is the financial advisor and Hawkins Delafield is the bond counsel.

Lower rates have been helping spur issuance amid rising demand.

The Connecticut GO sale on Thursday was a food fest with $4 billion in orders for $400 million in bonds, said Peter Delahunt, managing director at Raymond James & Associates.

“Investors have a lot of cash and it showed up in heavily oversubscribed order flow on most all pricings today,” he said, adding that most deals were bumped to richer levels by a significant amount.

Part of the demand stems from the billions of dollars arriving into funds over the last five weeks, at a time when yields continue to drop in the midst of the supply-demand imbalance, Delahunt noted.

“A large-scale risk-off trade in global markets has led to a continued rally in U.S. Treasuries,” as municipals followed suit, and yields dropping by five to 10 basis points as demand continued to outstrip supply, he said.

However, demand is there.

“What we learned this week was there is a lot of money coming into funds, and most of the week’s deals were oversubscribed — some of them 20 to 30 times,” a New York trader said Friday.

“There’s so much money around,” he said adding that he expects all of the upcoming week’s large offerings to be highly sought.

He said the market will have no trouble finding a home for the new bonds.

“Certainly with the flows — and reinvestment in June and July — the market can handle the supply,” he said.

At the same time, the market is in a Catch 22, again battling low rates, as cash-heavy investors are in the midst of summer reinvestment season, the trader noted.

“We’re in a fist fight between low rates again, the same low rates that caused people not to want to put money to work back in February, and now we’re back here,” he said.

“The market is tightening up a little bit, but not as much as Treasuries,” the trader added.

He said investors will need to find a comfort level with the levels, as the Federal Reserve Board has indicated the need to keep rates low in the near future.

“I believe we will stay in this trading range and I don’t see us breaking out of it,” the trader predicted.

However, in the backdrop of the week’s strength, there are many cross-currents that could potentially impact the market, according to the trader.

He listed the re-emergence of COVID-19, unemployment, and the status of states and municipalities reopening for business or reimposing restrictions as among of the “thousands of possibilities” impacting the market’s behavior going forward.

For now, he said, the status quo remains positive, according to the trader.

“The market is day-to-day, and the theme is the Fed is keeping interest rates low, there’s no inflation, and no reason to go to higher rates, so week by week we will see what the economy does emerging out of COVID,” he said.

“It’s not off the table,” especially with talk of a potential vaccine available by August, he noted.

“All sorts of things are going on right now, but short-term we are going to handle the supply, rates are probably going to stay low, and there’s a lot of money flowing in and being spent on new issues,” he said.

Munis were mixed on the MBIS benchmark scale.

Lipper reports $2.8B inflow
Investors remained bullish on municipal bonds and continued to put cash into bond funds in the latest reporting week. It was the fifth straight week funds saw inflows and the fourth week in a row that those inflows topped $1 billion.

In the week ended June 10, weekly reporting tax-exempt mutual funds saw $2.759 billion of inflows, after inflows of $1.206 billion in the previous week, according to data released by Refinitiv Lipper Thursday. 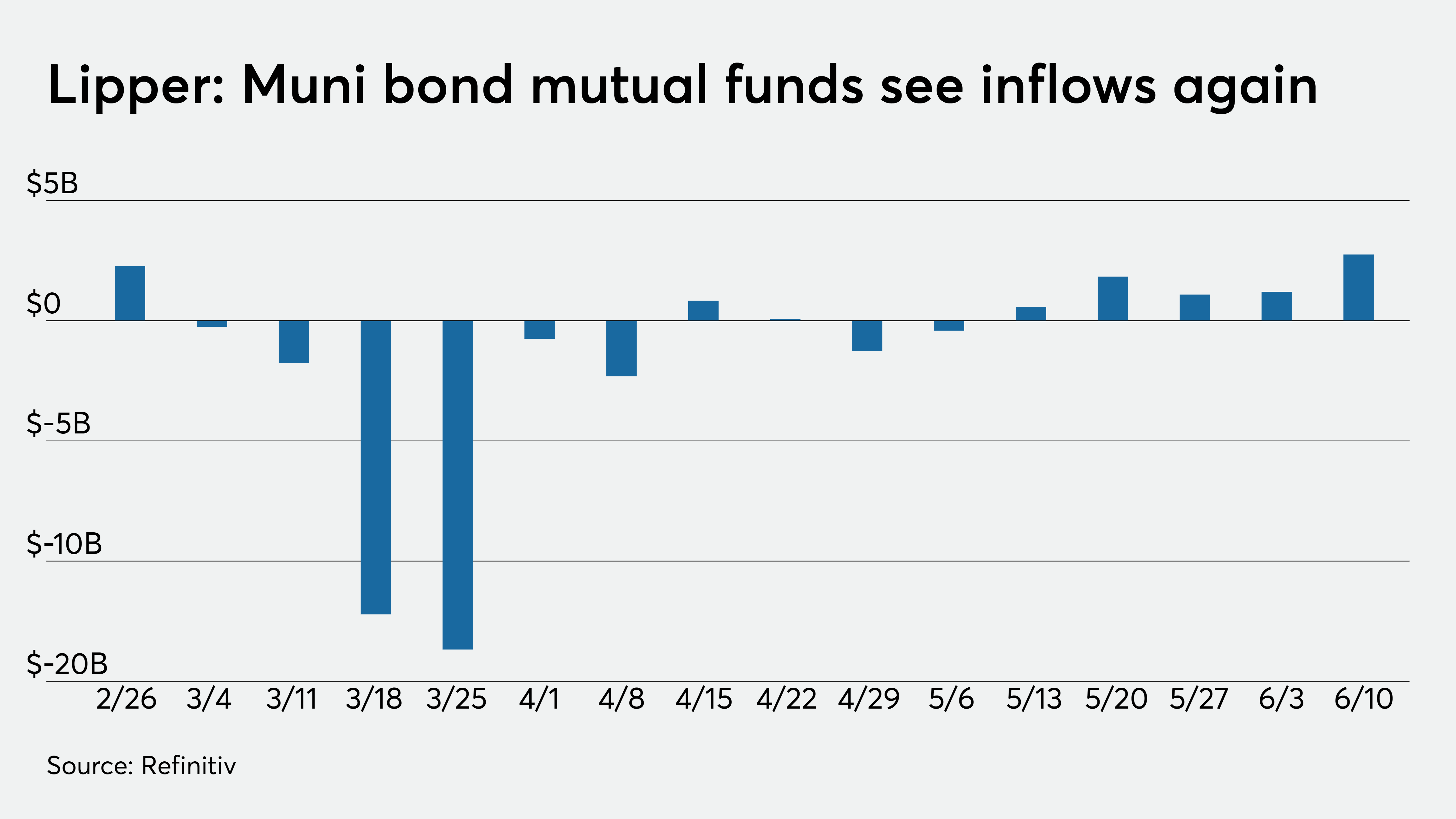 The four-week moving average remained positive at $1.724 billion, after being in the green at $1.180 billion in the previous week.

Bond Buyer indexes mixed
The weekly average yield to maturity of the Bond Buyer Municipal Bond Index, which is based on 40 long-term bond prices, fell to 3.69% from 3.71% from the week before.

Government mortgage bailout numbers improve slowly, but the real test is ahead
Wall Street’s best performing analysts have a strong buy rating on these 6 dividend stocks
Stocks making the biggest moves midday: Amazon, Carvana, Tesla, Peloton and more
Markets are expected to be choppy, but dip buyers could be looking at tech favorites in week ahead
Debt refinancing plan big piece of Nassau County budget proposal