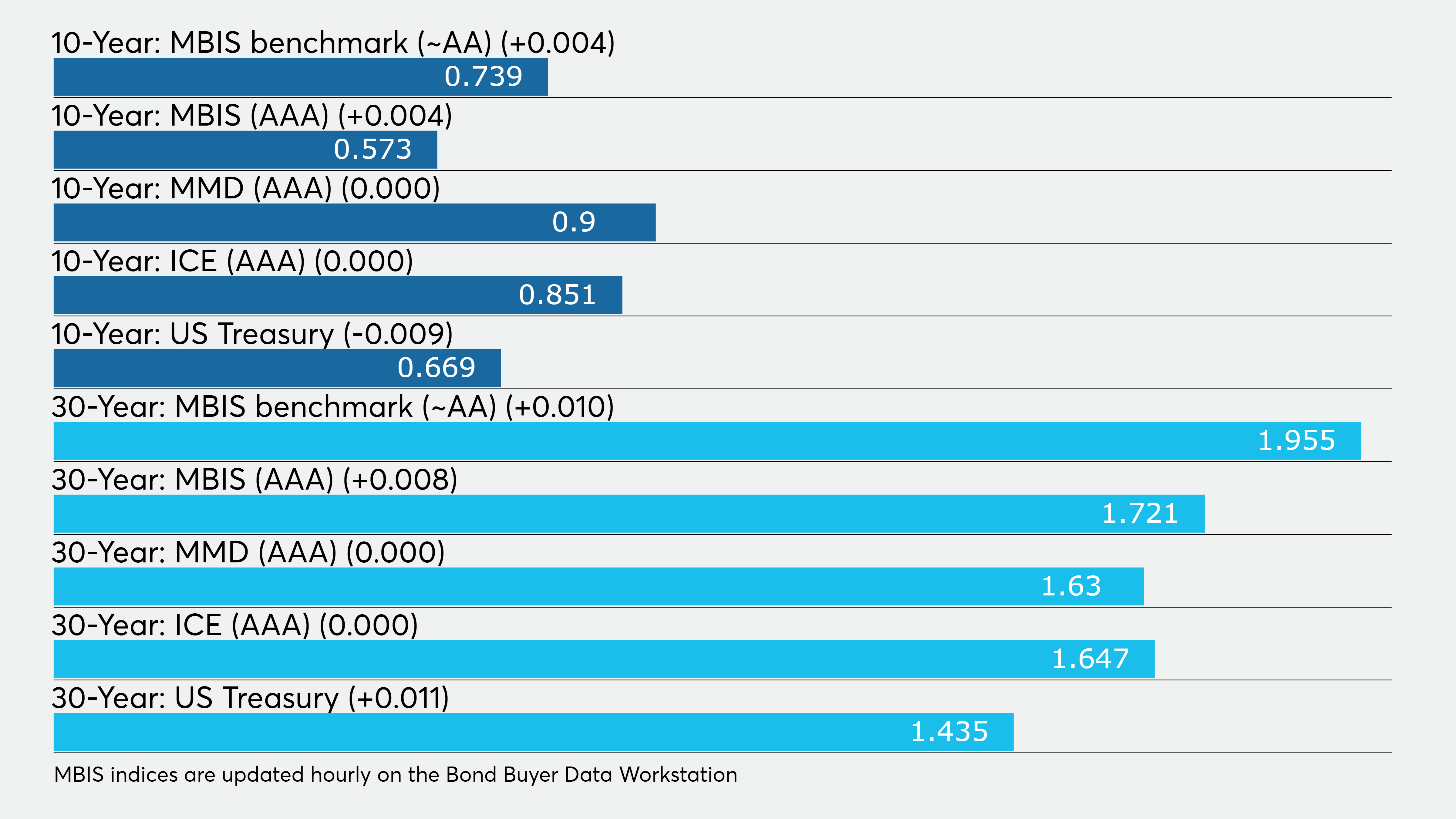 When market participants return to work after the long holiday weekend, they will see a chunky slate of supply waiting for them as issuers take advantage of low rates and a stable marketplace.

Offerings from issuers in California, Oregon and Washington state top the calendar. IHS Ipreo estimates weekly volume at $7.38 billion, consisting of $6.20 billion of negotiated deals and $1.18 billion of competitive sales.

In secondary trading, municipals finished out the week little changed on triple-A benchmarks as the market closed early ahead of the holiday. Yields have essentially remained flat since mid-June as the market has digested new issues well and investors are starved for paper, especially tax-exempts.

Traders and analysts noted the holiday-shortened week has had munis in a holding pattern.

“Very attractive muni-U.S. Treasury ratios, little to no supply, and seven weeks of inflows are underpinning solid support despite many participants reporting that they don’t ‘love’ current yields and are hoping things back up a bit before becoming more active,” said Greg Saulnier, managing analyst, municipal bonds, at Refinitiv TM3/MMD.

“Month/quarter-end amid a holiday-shortened week is undoubtedly having an impact on overall flows, but primary deals continue to be well received so I think munis are just circling the wagons until traders return post holiday.”

Primary market
The Regents of the University of California (Aa2/AA/AA/NR) is heading to market with a $2.32 billion tax-exempt and taxable revenue bond deal.

JPMorgan is set to price the tax and revenue anticipation notes on Tuesday.

Proceeds will be used to provide effective cash flow management for the city’s general fund revenues and expenditures in fiscal 2020-2021 and to make the city’s annual contribution to the fire and police departments’ pension plan and to the city employees’ retirement system.

Additionally, the Asante Health System Obligated Group’s (NR/A+/A+/NR), $450 million of revenue and refunding bonds for the Medford Hospital Facilities Authority, Ore., is set to be priced by JPMorgan on Tuesday

What does the heavy June new issue bode for July?
June’s $46 billion supply surge would appear on the surface to create some demand delay, but most issuance was well distributed with slower turnover in select structures (intermediate 2% coupons), said Kim Olsan, senior vice president at FHN Financial. She compared previous heavier June issuance since the year 2000.

· June 2003: $48 billion in supply hit the market but the summer period was marked a large sell-off that took the 10-year UST up 130 basis points between mid-June and the end of July. The 10-year AAA benchmark corrected over 80 basis points in that period, but by years end finished near where it was at the end of Q2.

· June 2016: Supply totaled $47 billion while rates trended to then-historical lows (10-year AAA hit 1.29%) into July. As Q3 progressed that year, election-related effects were becoming more prominent. By the end of September 2016, the 10-year AAA had traded to the 1.50% range.

Turning to this year, heavy redemptions created a strong seller’s market, but pandemic impacts are creating an ongoing bifurcation of flows where GOs and essential service bonds are drawing more demand and revenue-challenged sectors such as healthcare and transportation are seeing less representation.

“It is expected redemptions will create organic inquiry, but the upcoming election period cannot be ignored as another influencing factor,” she said.

The average seven-day simple yield for the 187 tax-free and municipal money-market funds was unchanged at 0.03%.

The average, seven-day simple yield for the 792 taxable reporting funds sipped to 0.06% from 0.07% in the prior week.