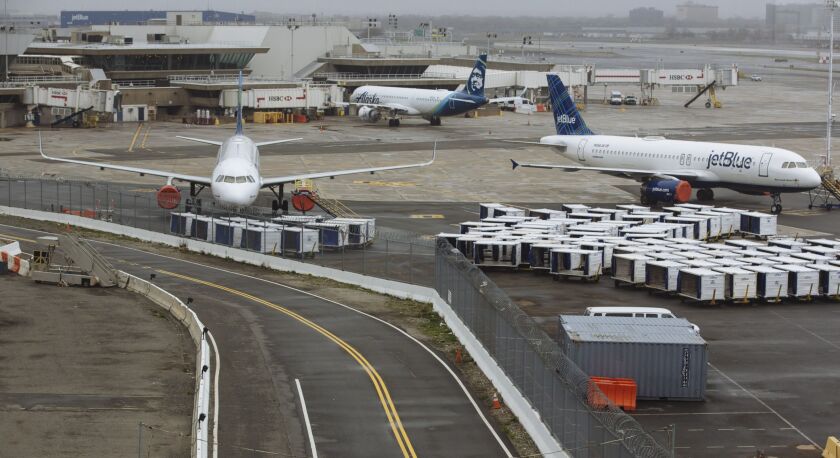 Citi priced the three-year notes in a negotiated deal Tuesday. The Port Authority plans to use proceeds to pay debt service on outstanding consolidated bonds. The notes, which mature on July 1, 2023, priced at par to yield of 1.09%.

“This deal is a recognition that they aren’t going to recuperate a lot of their revenues for quite a while,” said Howard Cure, director of municipal bond research at Evercore Wealth Management. “It’s an indication of their cash flow problems.”

Ahead of the deal, S&P Global Ratings downgraded the Port Authority’s bond ratings by one notch to A-plus from AA-minus, retaining a negative rating outlook, citing plummeting volume due to the COVID-19 pandemic. The Port Authority’s preliminary estimates forecast a possible $3 billion reduction in revenue over a two-year period from March 2022 to March 2022, according to S&P.

The new S&P rating is one notch lower than Moody’s Investors Service and Fitch Ratings, which rate the Port Authority at Aa3 and AA-minus, respectively, with negative outlooks. The agency had $22.2 billion of outstanding consolidated bonds as of March 31, according to an April 14 disclosure to bondholders.

Preliminary bond documents prior to the sale detailed the steep financial impact the coronavirus is having on the Port Authority’s transportation assets.

Ridership on its PATH trains was down 89% from June 8-12 compared to average weekday use in June 2019. There was also a year-over-year 92% dip in passengers at Port Authority airports and 28% drop in automobile traffic on the agency’s bridges and tunnels during that period.

“The severe drop in enplanements and transit ridership, and to a lesser extent vehicular traffic, in our view, has diminished the PANYNJ’s overall credit quality, stressing its financial performance over the intermediate term.’ S&P credit analyst Todd Spence wrote in the June 26 report. “S&P Global Ratings believes the PANYNJ’s activity levels could be unpredictable or materially depressed beyond 2020.”

“The issuance of the three-year notes is an efficient and effective way to support the Port Authority’s near term liquidity which has been adversely impacted by the significant decline in activity revenues as a result of the Covid-19 crisis,” said Port Authority spokesman Lindsay Kryzak. “The offering attracted significant investor interest.”

Tenants unable to meet certain financial obligations during the pandemic are also negatively impacting Port Authority finances with some requesting relief from contractual payment obligations, according to the pre-sale documents. The Port Authority is estimating roughly $85 million of deferred payments from airlines from March 1 through April 30 that it expects to recover sometime in the second half of 2020.

The Port Authority had strong liquidity to combat revenue losses during the pandemic with $2.86 billion of unrestricted cash and investments as of May 31, 2020. The agency also received $450 million of Federal Aviation Administration grants for its airports under the CARES Act.

Port Authority Executive Director Rock Cotton has said additional federal aid is needed if it wants to maintain its ongoing $37 billion, 10-year capital program through 2026. The capital plan, which features large-scale airport redevelopment projects at LaGuardia, Kennedy and Newark Liberty, is likely to be modified, according to bond documents.

Spence noted that the Port Authority faces credit risks in the near-term from the unpredictable nature of COVID-19 and shifting travel restrictions that may result. The pandemic-induced recession and potential behavior changes with travel also makes effective financial budgeting more challenging, according to Pence.

Cure said Moody’s and Fitch may hold off on taking any rating actions on the Port Authority this year until it is determined whether more federal assistance can be achieved. He said the November elections could also give the Port Authority a boost because Democratic control of the White House and Congress would likely spur more financial backing to transportation agencies in the Northeast.