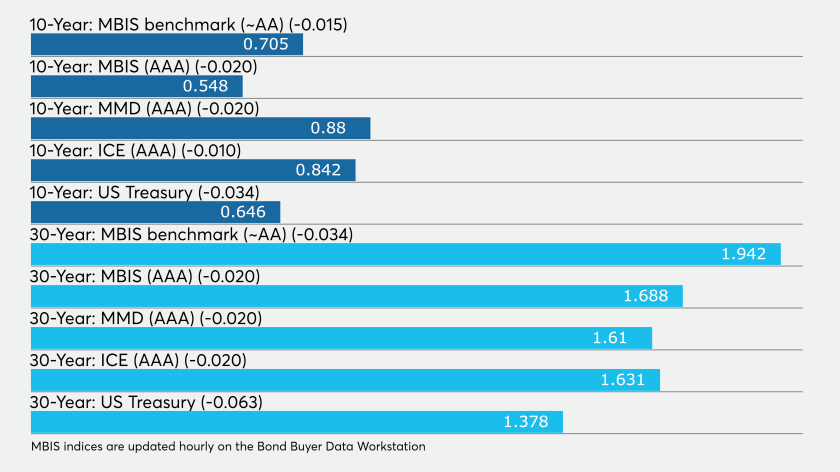 Municipal market players saw a bevy of notes and bonds price into a strong environment where issuers took advantage of low rates and buyers with reinvestment cash snapped up the new deals.

The post-holiday climate in the municipal market reflected strength as yields fell slightly amid an ongoing hearty appetite for new paper.

“For the first time in about a week municipal bonds are firmer today, with yields falling a basis point or two,” said Robert Roffo, managing director at R&C Investment Advisors.

The tone was very quiet going into and coming out of the July 4 holiday weekend, he noted, pointing to the much-needed arrival of this week’s new deals.

The calendar should be well received, he said, as it is evenly split between taxable and tax-exempt — with about $2 billion in short-term issuance.

“With the effects of the COVID virus still working their way through state and local finances, I believe the municipal calendar for the second half of the year could grow substantially in order for issuers to close budget shortfalls,” Roffo said.

“With cash flows into the municipal market turning positive and a higher-than-average amount of bonds being called or maturing, there will be plenty of cash on the sidelines to absorb any new issues,” Roffo added.

Wells Fargo Securities won the bonds with a true interest cost of 1.7058%

PFM is the financial advisor; McCall Parkhurst and the State Attorney General are the bond counsel.

The deal is backed by the Washington state credit enhancement program.

And on Thursday, JPMorgan will price the Regents of the University of California’s (Aa2/AA/AA/NR) $2.32 billion tax-exempt and taxable revenue bond deal.

Looking at short-term extension
Municipal yields have been mostly static since June 16, according to Kim Olsan, senior vice president at FHN Financial.

“As the curve has remained stuck, there is some value in short-term extension against earlier periods,” she said.

Looking at a comparison between the seven-day SIFMA yield and the two- and five-year AAA BVAL yields from 2019 to the current period, she said there were several notable factors:

Secondary market
Short-term readings on MMD’s AAA benchmark scale were unchanged on Tuesday. Yields on the 2021 and 2023 maturities were steady at 0.25% and 0.27%, respectively. Munis were stronger out longer. The yield on the 10-year GO muni fell two basis points to 0.88% while the 30-year yield was off two basis points to 1.61%.

Explainomics: How to build an investment portfolio that supports racial justice
Cramer says Trump’s election delay suggestion ‘sows chaos and chaos is bad for the stock market’
Warren Buffett continues his Bank of America buying spree, bringing stake to 11.8%
Lots of companies are saying they have ‘operating leverage’ — that’s just code for firing people
A surge in evictions could turn into financial crisis, economist warns