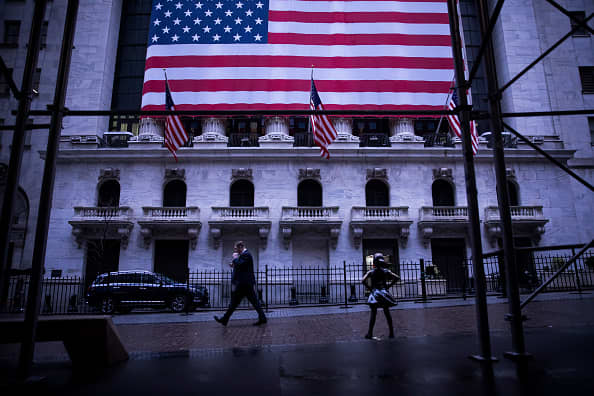 A pedestrian passes by the New York Stock Exchange, NYSE, in New York on March 17, 2020. (Photo by Michael Nagle/Xinhua via Getty) (Xinhua/Michael Nagle via Getty Images)

Companies struggling to get through the coronavirus slashed the amount of money they returned to shareholders through dividends in the second quarter.

The net change in Q2 payouts, or the difference between increases and decreases, for all domestic common stocks registered a decline of $42.5 billion from the same period a year ago, according to Howard Silverblatt, senior index analyst at S&P Dow Jones Indices.

“There were massive dividend suspensions in Q2 2020 as companies had no time to ride out the virus, as sales were cut off and positive cash-flow turned to burn-rate analysis,” Silverblatt said.

For the S&P 500 large-cap companies, dividends totaled $119 billion for the quarter, compared to the record $127 billion issued in the first quarter. However, the Q2 total was a slight increase from the $118.7 billion a year ago.

The U.S. economy entered recession in February following its longest expansion in history. A month later, corporate America came to a standstill due to stay-at-home orders associated with the coronavirus containment.

Second-quarter earnings for the S&P 500 are expected to fall about 44% from the same period a year ago, the steepest plunge since Q4 of 2008, according to FactSet. That decline is projected to abate somewhat in the third quarter, to a loss of 25.2%, but the index is not expected to show aggregate profitability until Q1 of 2021.

While Silverblatt said there are signs that the worst is in for dividend pullbacks, the damage is likely to continue into the third quarter. He said that dividend suspensions rather than outright decreases will be more prevalent.

Much of that, though, will depend on the path of the virus and the extent to which the economy can reopen successfully. States that have seen flareups have begun to roll back their openings, threatening the slow growth.

“The cuts … appear to have subsided, as those most impacted have taken their actions and those currently able to ride through the initial downturn are continuing to pay,” Silverblatt said. “If the overall reopening improves and regions act to limit any upturns, we would expect to see fewer and smaller dividend increases in the second half, and a significant decrease in cuts and suspension, which could limit the overall 2020 damage to a low single-digit decline.”

Should the virus continue to flare up, that could mean “a return to significant cuts,” he added.

How And Where Will We Work In The Future?
Why QTS Realty Is Trading At All-Time Highs
Personal Finance 101: The complete guide to managing your money
Fitch lowers United States rating outlook to negative
Stocks making the biggest moves in the premarket: Procter & Gamble, Comcast, UPS, Cigna & more