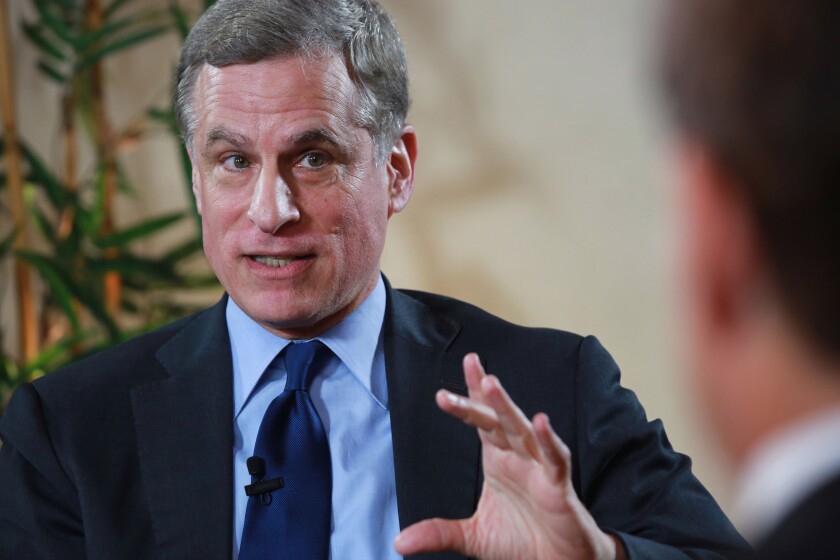 Wide-spread mask wearing and following other health-care measures will be vital to economic growth in the U.S., said Federal Reserve Bank of Dallas President Robert Kaplan.

“While monetary and fiscal policy have a key role to play, the primary economic policy from here is broad mask wearing and good execution of these health-care protocols,” Kaplan said Friday in a Fox Business interview. “If we do that well, we’ll grow faster.”

Kaplan said mask wearing could substantially mute the spread of the coronavirus, which is resurging in parts of the country and leading to a renewed halt in economic activity. Using face coverings would likely bolster reopenings and create faster growth and a lower unemployment rate.

“If we all wore a mask it would substantially mute the transmission of this disease and we would grow faster. We would have a lower unemployment rate,” he said. “We’d grow faster, and would be far less likely to slow some of our reopenings. But we’ve been uneven so far on mask wearing.”

Kaplan, a voter on this year’s policy-setting Federal Open Market Committee, said he expects the U.S. economy to grow in the third and fourth quarters, but that the year overall will see a contraction of 4.5% to 5%.

He added that the economy will likely need more fiscal stimulus. Unemployment benefits will need to be continued in some form, in addition to more aid to state and local governments.

The $600 additional weekly jobless benefit passed under the CARES Act in March is set to expire at the end of this month, while some 18 million people are still receiving unemployment insurance.

Lawmakers in Congress are debating more support and the Trump administration is pushing for them to pass something before the August recess. Including the CARES Act and other stimulus measures, Congress has already passed $3 trillion in pandemic aid. The White House has said it doesn’t want the next stimulus package to exceed $1 trillion.

The Fed, which has slashed interest rates to zero and deployed nine emergency lending programs to bolster financial markets and businesses, still has more firepower left in its arsenal, said Kaplan. The central bank should examine existing emergency measures carefully as the economy begins to recover, he said.

“During a crisis, a number of these steps are necessary,” Kaplan said. “As we move through this crisis and get to more stability, I do think it’ll be important for the Fed to be very conscious of the effect that our programs have on financial markets, any distortions it’ll create in the future.”

Best ETFs For Trading: Small- And Mid-Cap
Biden looks to give a big boost to homebuyers and builders
Stocks making the biggest moves after hours: United, Discover Financial, Alcoa and more
6 Expert Investment Portfolios You Can Implement Today
Offices are the top choice for Asia-Pacific property investors in 2021, survey finds