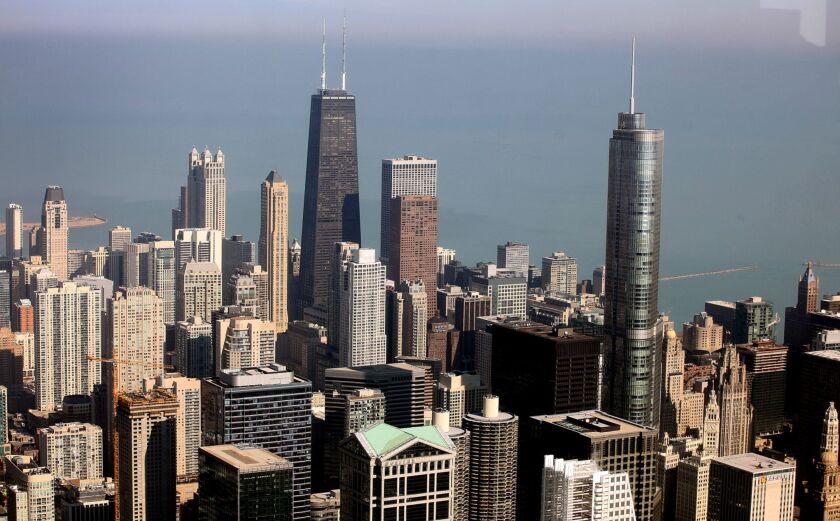 State tax law changes that improve Chicago’s prospects for developing its first casino will help efforts to cover rising pension contributions but the project falls short of solving the city’s budgetary and pension woes, according to Moody’s Investors Service.

“The legislation marks an important step toward a new revenue source to help the city fund increasing pension costs for its four single-employer pension plans — a heightened challenge because of coronavirus-driven declines in existing revenue streams,” Moody’s writes in a review calling Gov. J.B. Pritzker’s recent signing of Senate Bill 516 as a “credit positive.”

This month’s Fitch downgrades followed a review based on Fitch’s criteria revisions triggered by rulings in Puerto Rico’s bankruptcy and published in January.

The city expects the casino to generate $200 million annually in new tax revenue that would go improve funding for the city’s police and firefighters’ pension funds.

The city still must find an investor and select a site to house the casino.

“Although credit positive, a casino is not a panacea for Chicago’s budget challenges because attracting gamblers is increasingly competitive and the city will need to make additional budgetary adjustments to accommodate growing pension costs of approximately $500 million over the next two years,” Moody’s said.

Moody’s rates Chicago Ba1 with a negative outlook. It cut the rating to one notch below an investment grade in 2015 after efforts to reform pension funds were set back by court rulings reinforcing the state constitution’s ban on benefit cuts. It remains the only rating agency to hold the city at speculative grade.

Lightfoot’s administration has been banking on the revenue from a casino and an additional $100 million from proposed changes to the tax on property sales to help the city reach structural balance by 2022 when contributions will jump about $300 million to bring the remaining two funds to contributions tied to an actuarial payment.

Police and firefighters reached an actuarial contribution in the current budget. The municipal and laborers funds are ramping up to one in 2022. State passage of the real estate transfer tax has stalled. Net pension liabilities in 2019 rose to $31.8 billion from $30.1 billion.

The COVID-19 pandemic has put in dent in casino prospects, at least temporarily, and highlighted the risks associated with such revenue streams after Illinois in March shuttered its existing 10 casinos to slow the spread of the disease. They were allowed to reopen this month with restrictions.

Execution risks remain on reaching a deal and “it is also uncertain when a return to normal will materialize for activities like gambling, and whether the coronavirus will lead to enduring changes in gambling patterns, such as a shift toward more online options from in-person gaming,” Moody’s wrote. The casino also faces rising competition as the 2019 expansion added five other casino licenses.

Chicago is facing a $700 million gap in its current budget and has projected a potential billion dollar hole in 2021 as it grapples with deep hits to hotel, restaurant, entertainment, parking and other taxes impacted by the economic shutdown that began in mid-March.

The state is in phase four of a reopening but conventions and large gatherings are still banned and restaurant capacity is restricted. Near-term “the city’s healthy liquidity will help provide a short-term buffer against budgetary challenges,” Moody’s said.

Fitch
Fitch began reconsidering its criteria on tax-supported debt after rulings in Puerto Rico’s bankruptcy case shook market beliefs that repayment of special revenue debt would continue to be repaid during bankruptcy proceedings.

Fitch published the alterations in January. They prompted a cut in Chicago’s Sales Tax Securitization Corp. bonds by three notches to AA-minus from AAA due to the new cap that is linked to the host government’s credit with the differential based on a review of how protected the credit is from the sponsoring government’s distress.

Chicago’s second water and sewer revenue bond programs were lowered this month to A-minus from AA-minus and the Chicago Board of Education’s capital improvement tax rating took a one-level hit. Fitch does not rate the first lien sewer bonds and the water first lien is closed and does not have outstanding debt.

The stand-alone water and sewer credits were put at A-plus but based on the criteria caps an A-minus is applied.

“The relationship to the city as the host government serves as an asymmetric risk given the water system rating is limited to no more than three notches above the city’s ‘BBB-minus’ issuer default rating,” Fitch wrote.

The city operates the water and sewer programs at enterprise systems. Bonds are secured by net revenues generated from fees paid by users after payment of any first lien debt and operations and maintenance.

The school district’s capital improvement tax rating on $880 million of debt was also dropped to A-minus from A. Fitch rates the school board’s $7 billion of general obligation debt at BB. The outlook on both is stable.

The CIT bonds enjoy a first priority lien on revenues raised from a special property tax levy that is restricted by state law solely for construction, acquisition, and equipping of school-related projects and they meet Fitch’s standards for being considered “special revenues” that are viewed as faring better during bankruptcy proceedings.

The downgrade is due to “Fitch’s assessment that CIT structural elements and security interests are sufficiently strong to warrant a maximum 5-notch rating distinction between the CIT rating and the district’s issuer default rating,” Fitch said.

Florida’s New-Home Communities Seen Leading The Nation Amid “Amazing” Rebound
Explainomics: How to build an investment portfolio that supports racial justice
A surge in evictions could turn into financial crisis, economist warns
Virgin Galactic partners with Rolls-Royce as it looks to build an aircraft for supersonic air travel
Stocks making the biggest moves in the premarket: Twitter, Alphabet, Regeneron, Sony & more