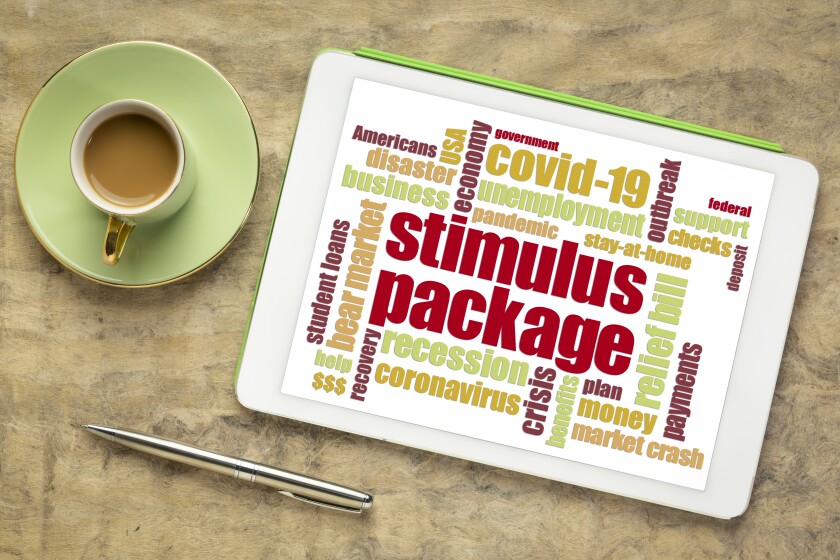 With COVID-19 cases surging in parts of the country, and no end in sight, it is almost certain there will be another round of stimulus, with many speculating what it will look like.

Lee Ferridge, head of macro strategy for State Street Global Markets, and Noel Dixon, global macro strategist for State Street, believe it will start with the most pressing issue: the sunsetting of the Federal Pandemic Unemployment Compensation. “We believe there will be a compromise here on a reduced amount per week ranging between $200 and $450,” they said. Treasury Secretary “Steven Mnuchin has floated the idea of 70% wage replacement, but Democrats will fight hard against this and likely advocate a flat payment.”

Another round of economic impact payments could be included, but for lower earners. “These will likely target those earning less than $40,000 a year rather than the $100,000 in the CARES act,” they said. “Given the rebound in coronavirus cases, we believe there will ultimately be support for state and local governments.”

Schools, including colleges, can expect relief, Ferridge and Dixon believe. Estimates suggest about $100 billion in aid for the sector, with about “two-thirds” going toward K-12 and the rest to colleges and universities.

And it’s unlikely to get done until the last minute, they said. “We expect this bill to get close to the final hour deadline which is August 7, although the existing FPUC payments run out on July 31, so that might be a better deadline to work to.”

The bill could be broken into smaller components, they added, “in order to make compromise easier.”

In an election year, neither party wants to risk taking blame for not passing a bill, according to David Kelly, chief global strategist at JPMorgan Funds. “Even in a highly polarized environment, it is likely that a bill will be passed as neither political party will want to be blamed for sinking a bill containing much-needed relief,” said Kelly. “That being said, negotiations are likely to stretch into early August rather than be wrapped up in July.”

Kelly agrees the stimulus will offer money “to individuals, although likely phased out at a lower income threshold than in the first go-round,” extended unemployment benefits at a lower rate than in the CARES Act, use of Paycheck Protection Program money still available for companies suffering “substantial revenue decline,” and help for state and local governments, but not as generous as the House’s plan.

Schools should get money to help them reopen and businesses could get “liability protection,” if they’ve made “good faith efforts to follow public health protocols to avoid the spread of the virus.”

After this stimulus, Kelly said, “realistically a further bill will likely be needed after the November election.”

They noted that without an extension of the moratorium on evictions a potential 20-28 million people could face eviction during the second half of the year. That is double the displacement that took place during the years following the global financial crisis.

Jeff Klingelhofer, co-head of investments and portfolio manager at Thornburg Investment Management, said, the unemployment stimulus is the key, especially after initial jobless claims rose in the latest week. “Many companies are talking about future furloughs and job cuts,” he said. And while stimulus has “stabilized markets … it’s reinforced investor complacency.”

New home sales
June new home sales soared 13.8% to a seasonally adjusted 776,000 level, from the upwardly revised May rate of 682,000, according to the Commerce Department. The may figure was originally reported as 676,000.