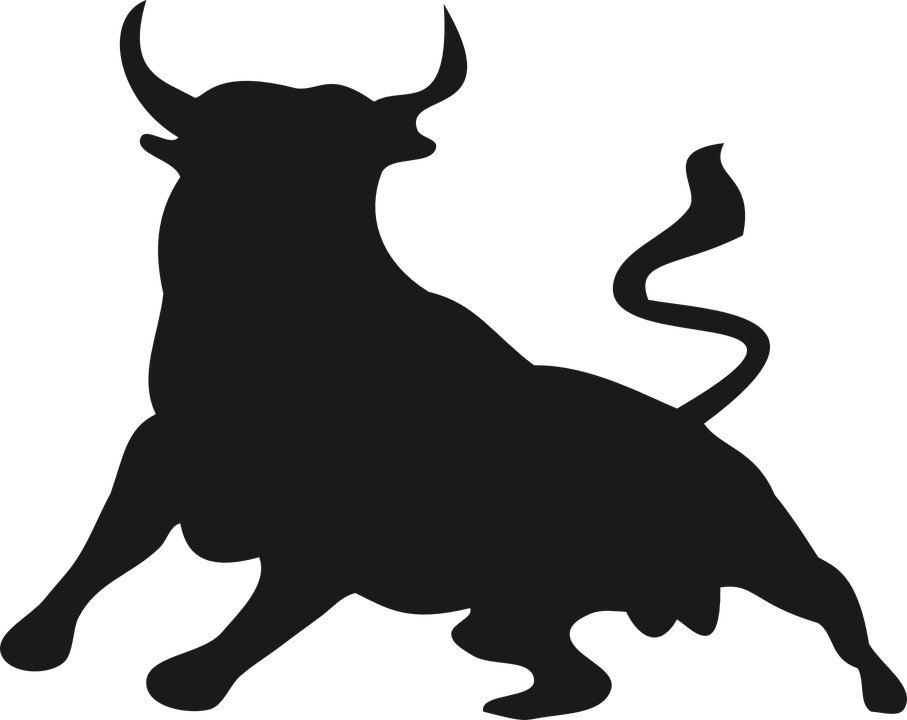 Global economic trends continue to be the dominant influencer in currency markets, and the Invesco CurrencyShares Australian Dollar Trust (NYSEARCA:FXA) has gained 24.3% since hitting its lows in March 2020. In part, this move has been fueled by recent monetary policy decisions from the Reserve Bank of Australia that managed to maintain interest rate levels without falling into negative territory. However, the region’s stable economic data reports also suggest increased potential for continued strength when compared to counterparts like the Invesco DB U.S. Dollar Index Bullish Fund (NYSEARCA:UUP).

On July 20th, 2020, we published an article on Seeking Alpha which argued in favor of a bullish turnaround reversal in FXA after the ETF had fallen by over 15% during the previous 18 months. This argument was largely based on the fact that economic disruptions coming as a result of the COVID-19 pandemic have been relatively limited when compared to the world’s hardest-hit countries. Since that time, market valuations in FXA have already moved higher by 2.13%, and these trends have outperformed the S&P 500 during this period.

In the July article, we noted that, despite these limited economic disruptions, “changes in the country’s underlying unemployment rates and losses to quarterly figures in Gross Domestic Product (GDP) have been muted when compared to many of the world’s largest economies. As most of these countries are expected to keep rates near historic lows for an extended period of time, a more supportive long-term interest rate outlook should help Australia maintain its traditionally favorable yield differentials and could continue to bring new buyers into FXA”. Despite recent monetary policy decisions that have been released by the Reserve Bank of Australia, each of these prior stances remains valid, and we continue to expect higher market valuations in FXA by the end of 2020. 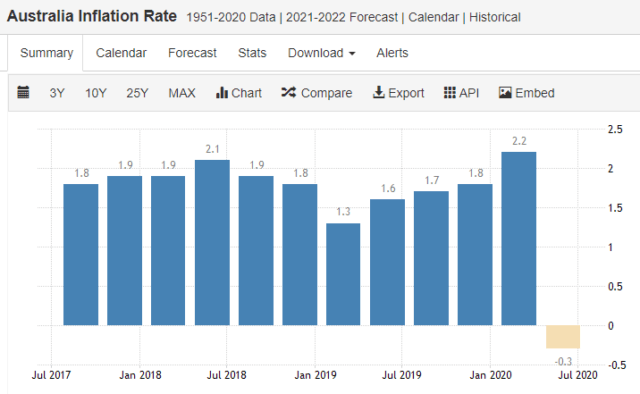 During the second-quarter period of 2020, Australia’s inflation rate fell by -0.3% on an annualized basis, and Bruce Hockman, Chief Economist for the Australian Bureau of Statistics, explained:

So, while Australia’s inflation figures actually came in above market expectations (-0.4%), these figures follow an increase of 2.2% during the first-quarter period, and so, it’s clear that the country’s economy has not completely escaped the negative economic effects of the COVID-19 pandemic. Australia’s consumer prices fell by -1.9% on a quarterly basis, which is the biggest decline on record. 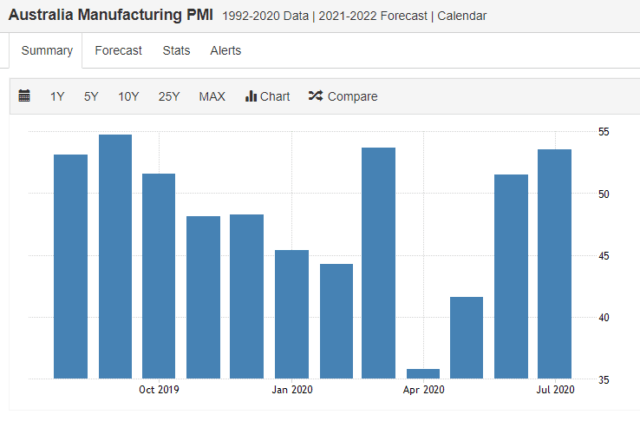 In July, Australia’s AIG Performance of Manufacturing Index increased to reach 53.5 for the month. This was the best performance since March because new orders, total production levels, and employment in the manufacturing sectors managed to surpass the levels reached during the June 2020 period. However, it should also be noted that input costs rose for the month, while sales prices were largely unchanged. Overall, we can see that manufacturing activity in the region has quickly rebounded to pre-coronavirus levels, and this suggests that we could see continued strength as we head into the end of 2020. 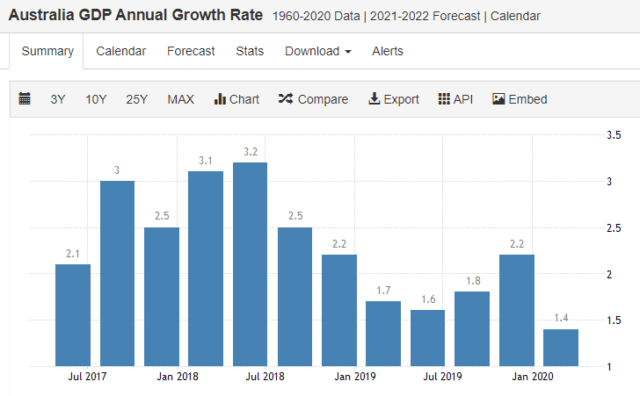 However, these performances still stand in a better position relative to the growth prospects that are currently expected for the United States. At the same time, we must also compare these figures to the most recent trends in the United States in order to get a better relative assessment of the market’s dominant economic trends. 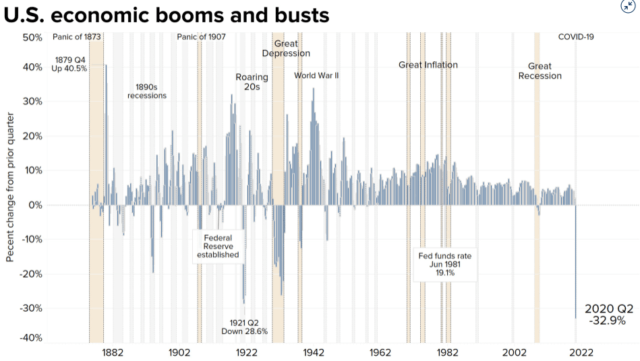 As global economic trends remain dominant in influencing currency markets, the Invesco CurrencyShares Australian Dollar Trust has rallied sharply after hitting its lows in March 2020. The Reserve Bank of Australia has managed to hold interest rate levels steady, and recent monetary policy decisions from the central bank suggest that the region is unlikely to fall into negative territory. Important Australian data reports support this outlook, and this indicates excellent potential for continued gains in FXA in relation to instruments tracking the value of the U.S. dollar.

Thank you for reading.

Now, it’s time to make your voice heard. Reader interaction is the most important part of the investment learning process! Comments are highly encouraged. We look forward to reading your viewpoints.

Snowflake buyers beware: IPOs that doubled have poor track record after that debut
Stocks making the biggest moves in the premarket: FedEx, Adobe, Kodak, Tapestry, DraftKings & more
Here are the changing trends in the real estate market during the pandemic
TAIL: Profit From A Market Downturn With This ETF
Stocks making the biggest moves midday: Oracle, Nvidia, Immunomedics, Overstock & more