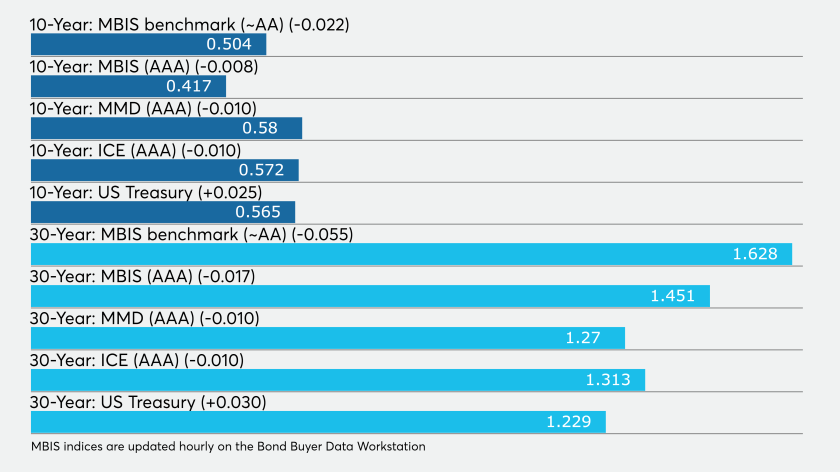 Municipal bond buyers will see a slate of new deals that are made up of green bonds and taxable issues that focus on California, Minnesota and Florida issuers.

IHS Ipreo estimates volume for the week of Aug. 10 at $8.7 billion in a calendar composed of $5.9 billion of negotiated deals and $2.9 billion of competitive sales.

Municipals continued to strengthen on Friday, with yields falling as much as one basis point on the AAA scales. On the week, 30-year yields are lower by 10 basis points since Monday.

The issue has been “climate bond certified” by First Environment.

Proceeds will be used to refund all four outstanding TIFIA loan agreements.

Price and structure rather than credit quality will drive demand for the two largest deals in California, a municipal manager said Friday.

“There hasn’t been much in California lately,” Sherman Swanson, managing director at Siebert Williams Shank in San Francisco.

Both the L.A. MTA and San Diego USD deals — both well recognized, high-quality credits with local appeal — will pique interest among supply-starved investors in the state, according to Swanson.

“I think there will be significant interest because there will finally be some size in California,” he said, noting that the structure and pricing will be important for investors considering the deal.

There is still a lot of pent up cash to be spent — even at the lower nominal yields, Swanson noted. The variety of bonds from each deal will appeal to different investors, he added.

The LA deal, he pointed out, has a serial structure between five- and 15-years, with sizable maturities throughout, while the San Diego deal has both short and long structure that includes serials and terms.

“There seems to be enough buyers to participate at the right structure,” he said.

The arrival of the deals into a strong market should be a selling point.

“We continue to look for it to slow down, but demand is still strong even at lower rates,” he said.

The deals will see local and national interest — the MTA deal is an appealing credit that doesn’t come often, but typically sees strong buyer interest, while the San Diego credit is another quality name, according to Swanson.

Overall, demand will hinge on price, and some investors may balk at the deal if they feel it’s higher than they want to see, he added.

On Wednesday, Goldman Sachs is set to price the New York and Presbyterian Hospital’s (Aa2/NR/AA/NR) $750 million of Series 2020 taxable bonds.

On Tuesday, Minnesota is competitively selling $1.204 billion of GOs in five offerings.

Demand thrives amid seasonal strength
Aside from the impacts of COVID-19, the municipal market is behaving as it typically does — July and August are generally favorable months with limited supply and strong demand — and this year has been no exception, according to Anthony Valeri, director of investment management at Zions Wealth Management.

“No doubt municipal bonds have benefited from continued strength in the Treasury market and the cheapening of municipal valuations relative to Treasuries in June has been reversed in July and the start of August,” Valeri said on Friday.

Valuations are still attractive for municipals relative to Treasuries, he said, “but they should be taken with a grain of salt at these ultra-low yields.”

Still, longer-term municipals remain one of the more attractive high-quality bond options, with absolute yields above comparable Treasuries across most of the maturity spectrum, Valeri said.

Some of the future market climate hinges on federal assistance to states, he noted.

“Failure to pass additional fiscal stimulus could be a negative for munis, but I’d view that as just a short-term [negative],” Valeri said.

“While I still believe additional stimulus will be passed, and with additional funds to states, states can likely manage with assistance received through the CARES Act and reverting back to their traditional cost cutting and tax raising, that typically follows an economic shock,” Valeri said.

Meanwhile, the presidential election remains a potential catalyst this fall.

“A Dem sweep could usher in higher taxes and bring in additional demand for municipal bonds,” Valeri said, noting that the Tax Cut and Jobs Act of 2017 lowered the corporate tax rate removing incentive from banks and corporate buyers to buy munis.

“A reversal of the tax cuts could bring these buyers back and create additional demand,” he continued. “Beyond the election, the fiscal deficit will remain large no matter who is in office and higher taxes will remain a longer-term tool,” which in turn, could create a longer-term tailwind for municipals, Valeri said.

In the week ended Aug. 5, weekly reporting tax-exempt mutual funds saw $1.612 billion of inflows, after inflows of $1.792 billion in the previous week, according to data released by Refinitiv Lipper Thursday.

It was the 13th week in a row that investors put cash into the bond funds.

The four-week moving average remained positive at $1.590 billion, after being in the green at $1.443 billion in the previous week.

On Friday, municipals were stronger all along the curve, according to the final readings on Refinitiv MMD’s AAA benchmark scale.

“Municipal bonds are ending a strong week on an up note,” ICE Data Service said. “Yields out to 17 years are below 1%. The muni percentage of Treasury yields 9 years and in are below 100%, the first time since early March.”

Record low rates have brought on robust issuance just when borrowing needs are on the rise and refunding activity is accelerating, according to analysts at BofA Securities.

“The visible supply index remains high — above $12 billion. We note that the 50-week moving average of the 30-day visible supply index is at its highest level in 10 years. It began its rise in August 2019, when taxable advance refunding was first introduced in the market,” BofA said in a market comment Friday. “The March/April market disruption this year did little to deter this average’s increase, which signifies a more robust issuance trend since last year. As such, the primary market should continue to do well in the months ahead, unless there is another unexpected disruption.”

Large issuance driven by taxable volumes did little to impact the recovery of muni relative values.

“This year, taxable deals have been approximately 30% of total issuance, so tax-exempt bonds are getting more valuable,” BofA said. “We expect long-term tax-exempt bond issuance to reach $300 billion overall in 2020. There have been more than $180 billion of such bonds issued year to date.”

The 10- and 30-year muni/Treasury ratios appear to be on their way to revisiting 100% due to the one-way market, the analysts wrote.

“If there is no market disruption in the months ahead, it is conceivable these ratios may fall below 100% and become more normalized,” BofA said.

Bond Buyer indexes move lower
The weekly average yield to maturity of the Bond Buyer Municipal Bond Index, which is based on 40 long-term bond prices, fell two basis points to 3.52% from 3.54% the week before.

Ex-NFL Players On The Front Lines Of Tackling Inner-City Challenges
SPDR Dow Jones ETF: History Is On Its Side
Wall Street’s top analysts are recommending stocks like Uber and Lovesac amid market volatility
Covid-19 mortgage bailouts decline slightly, but a new foreclosure crisis could be brewing
DraftKings surges after announcing ESPN deal