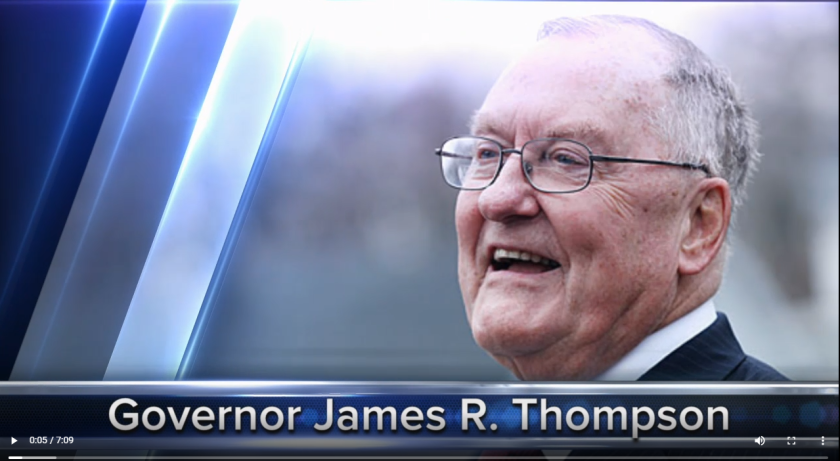 James R. Thompson, Illinois’ longest-serving governor whose legacy is reflected in bond financed projects across the state, died on Friday. He was 84.

Before launching his public career, the Republican who lived in Chicago had served as U.S. Attorney for the Northern District and built a reputation for fighting corruption through the prosecution of aldermen and former Gov. Otto Kerner Jr. He also participated in the probe that brought down Republican Vice President Spiro T. Agnew.

He first took office in 1977 and served until 1991. He was elected to four terms, but the first term ran just two years as the 1970 constitutional convention altered the election schedule. He joined Winston & Strawn LLP and served as chair for 13 years beginning in 1993 overseeing what the firm called in a rememberance a “period of tremendous growth.”

“As the longest-serving governor in Illinois history, ‘Big Jim’ was known to treat people he encountered with kindness and decency,” Gov. J.B. Pritzker said in a statement. “Jim dedicated himself to building positive change for Illinois, and he set an example for public service of which Illinoisans should be proud.”

Thompson’s reputation grew as a deal-maker and consensus-builder. With the White Sox ownership threatening to leave Chicago for Florida, Thompson twisted arms and made political promises to win over enough votes for a publicly subsidized stadium in 1988. The legislation needed to pass before a stroke of midnight deadline and lore has it that the chamber’s clocks were set back and the timestamp on the legislation reported it as 11:59 p.m.

On finances during his tenure, the state raised the income tax, approved a 3% compounding cost-of-living increases for employees that would prove a big contributor to the state’s pension woes, and ushered in a new form of borrowing — sales-tax backed bonds — to fund the $2.4 billion Build Illinois program.

The package was the first major capital plan in decades and promoted as a means to create jobs and spur economic development. Lawmakers over the years have authorized additional sales-tax backed borrowing under the program.

Other big projects that were helped along during his tenure included the bond-financed expansion of McCormick Place Convention Center and creation of the Metropolitan Pier and Exposition Authority, construction of a $170 million downtown Chicago state headquarters that now bears his name and is up for sale, and the renovation of Navy Pier, one of the city’s most popular tourist sites.

“Thompson exemplified a state government that worked and treated others with legendary kindness,” Illinois Republican Party Chairman Tim Schneider said in a statement. “He helped send a corrupt Governor to jail as a prosecutor, rebuilt the state’s infrastructure, saved the White Sox, and presided over a healthy and prosperous Illinois.”

Thompson was born in the Chicago suburb of Oak Park. He received his law degree from Northwestern University. He had been suffering heart problems, according to published reports. He is survived by his wife, Jayne, and daughter Samantha.

CEF Insights Market Update: September Review
Three Ways To Tackle Commercial Re-Occupancy In The New Normal
A record number of borrowers can now save on a mortgage refinance, as rates set another historic low
Wall Street’s top analysts are recommending stocks like Uber and Lovesac amid market volatility
TAIL: Profit From A Market Downturn With This ETF