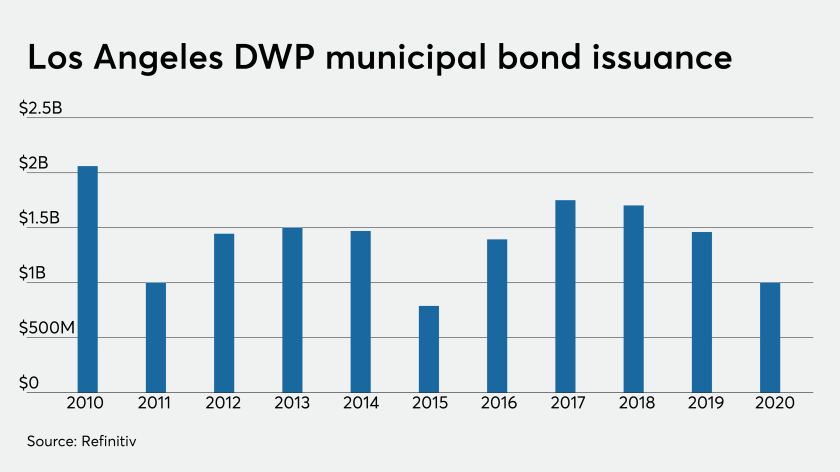 Municipals were steady to weaker on Tuesday, with yields flat to up as much as three basis points on the long end of the AAA scales.

However, the larger story for the municipal market is that the New York Metropolitan Transportation Authority — which has been a loud advocate for more federal aid — rejected all bids from the Street on its competitive sale of $465 million of Series 2020B transportation revenue bond anticipation notes and instead sold the deal to the Federal Reserve.

The agency sold $450 million of the transportation revenue BANs to the Fed through the Municipal Liquidity Facility program, the second large issuer to do so after the state of Illinois.

For the competitive offering, average clearing true interest cost was 2.79% and the MTA received 20 bids totaling $1.6 billion from 10 different banks.

However, pursuant to its bid process, the MTA rejected to those bids and instead sold $450 million to the New York Fed’s MLF at a true interest cost of 1.92%, resulting in savings of over 85 basis points compared to the public market levels, the agency said in a statement.

“This financing underscores again the MTA’s need for $12 billion of federal funding to offset projected revenue losses through 2021,” MTA Chairman and CEO Pat Foye said in a statement.

Multiple traders noted that MTA bonds have been trading at levels well above triple-A benchmarks and the prices that dealers were offering were actually market rate, showing that the backstop the Fed is providing is necessary in this increasingly volatile market. It made sense for the MTA to use the recently reduced rates the MLF is currently offering. That deal will close on Aug. 26. Proceeds of the notes will be used to retire existing BANs maturing on Sept. 1.

Others said an opportunity was missed for the dealer community in a credit that will likely rebound and the Street could have made something out of it.

“The Street let a good credit slip through their fingertips,” said Municipal Market Analytics Partner Matt Fabian. “The Street was pricing that deal too cheaply.”

Other traders also noted the deal was priced too cheaply and the dealer community was hedging that rates are about to rise more substantially than they have been so they priced it in.

“The MTA isn’t going away. New Yorkers are going to ride the trains and already are increasingly so,” a New York trader said. “This isn’t a game of dice — the largest subway system in the United States and practically the world — doesn’t disappear. If I were a betting man, I’d actually likely roll the dice on the A train still running at full clip soon. It was a move on the MTA to test the market. The MLF won.”

“Not one person right now can seriously look at this market and accept that retail will accept these levels. There has to be a moment when investors look at rates at absolute levels and push back,” the trader said.

Meanwhile, Fabian said the MTA move isn’t an indicator that other issuers will follow suit because they are not up against the same limitations and severe revenue shortfalls that the New York MTA is facing, so a deluge of issuers falling into line and using the MLF is unlikely for now.

“If New Jersey comes with $10 billion of short-term notes, perhaps, but you’re not going to see a flood into the MLF market,” the trader agreed.

The bonds will be priced for institutions on Wednesday, the same day the TFA is competitively selling $275 million of taxables in two offerings.

The pricing of two sizable California deals continued to feed the hearty demand from supply-starved investors, according to a New York underwriter.

“Some people were concerned yesterday with the heavy supply this week, but the amount of money is winning out here,” the underwriter said Tuesday. “I don’t expect MMD to change much unless there’s a sell-off in Treasuries, but we haven’t seen that in two days, so the stability is supporting the market.”

“There is a good tone and that will continue,” he said as two of the other large deals of the week priced on Tuesday — the San Francisco BART sale and the Los Angeles DWP offering.

“I would expect demand to continue to be strong,” he said of the California deals in general, but with one caveat on the San Francisco transit deal, he said. “Transportation credits right now are challenged due to less people taking public transportation due to the COVID-19 pandemic.”

The trader said the ultimate demand for the BART deal will hinge on pricing as investors remain highly concerned about getting the most bang for their buck in this ultra-low yield climate.

“If you can offer incremental yield within the 10-year part of the curve there will be good demand,” especially for retail investors, he added.

Meanwhile, the trader said there is just as strong demand in the taxable market as evidenced by a Bangor, Maine, deal that priced on Tuesday.

“The deal saw good interest and there were aggressive spreads, but it still saw good demand,” he explained, noting that spreads ended up tighter than where the deal debuted.

The 10-year was cut by 10 basis points on some of the serial bonds, he noted.

“That just tells you the demand component continues,” in both the tax-exempt and taxable markets, he said.

JPMorgan priced Trimble County, Ky.’s (A1/A/NR/NR) $125 million of Series 2016A pollution control revenue refunding bonds subject to alternative minimum tax as a remarketing for the Louisville Gas & Electric Co. The 2044 bullet maturity was priced at par to yield 1.30% with a mandatory put in 2027.

In the competitive arena Wednesday, Texas is selling $7.2 billion of tax and revenue anticipation notes (MIG1/SP1+/F1+/) while Georgia (Aaa/AAA/AAA/) sells $1.139 billion of GOs in five offerings.

In negotiated action Wednesday, Goldman Sachs is set to price the Los Angeles Department of Airports’ (Aa2/AA-/AA/NR) $1 billion of bonds for the L.A. International Airport while JPMorgan is set to price Louisiana’s (Aa2/NR/AA-/NR) $551 million of taxable gasoline and fuels tax revenue bonds.

Another New York trader agreed the market is expecting a concession on transportation credits during the pandemic.

“All airport and transportation credits are under scrutiny by institutional investors and LAX despite the historical strength will also be under credit scrutiny,” he said.

“The market is quiet and there are slightly weaker bids on long bonds by a couple of basis points,” the said.

Secondary market
Municipals were steady to weaker on the long end Tuesday, according to the final readings on Refinitiv MMD’s AAA benchmark scale.

“Muni bonds are mixed today, with the front end posting a small improvement while the back end is slipping a bit,” ICE Data Services said. “Trade volumes are inching higher from yesterday’s levels.”

Chip Barnett contributed to and edited this report.

Stock picking has a terrible track record, and it’s getting worse
Chime is now worth $14.5 billion, surging past Robinhood as the most valuable U.S. consumer fintech
Snowflake’s first-day pop means IPO left $3.8 billion on the table, the most in 12 years
119 state ballot referendums slated for Election Day
Frenzy in options trading could make this week more volatile for some favorite stocks