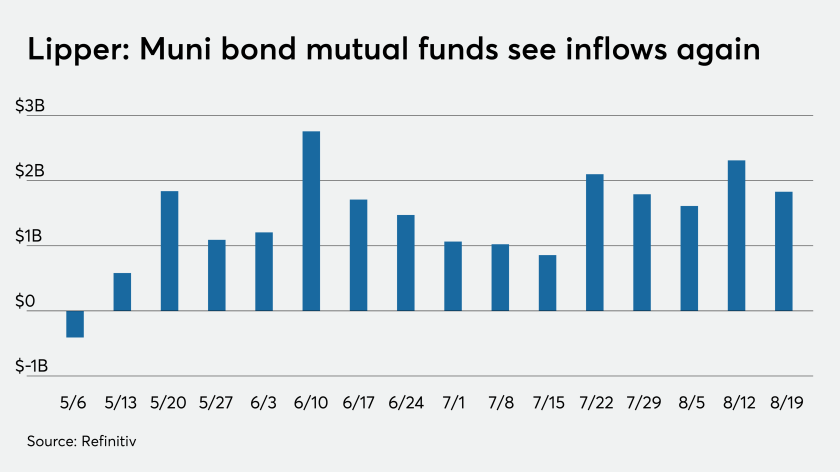 Municipals were steady to weaker in some spots, with yields on longer-dated maturities rising by as much as three basis points on the AAA GO scales.

The inflows continue in this market as Refinitiv Lipper reported $1.8 billion of inflows into muni mutual funds in the week ended Aug. 12, the 15th week in a row of positive results. The last time the muni funds saw an outflow was on May 6.

“There is a juxtaposition here in this market that is undeniable. You’ve got a retail sector that is dipping its toes into the water but an institutional investor base that is wanting paper,” a Pennsylvania trader said. “These flows show that demand is there from both investor fronts, but the spread widening is inevitable because of how tight they got over the past three months once the market settled. Summer is winding down, uncertainty in all markets is evident in participant behaviors and everyone should be ready for what post-Labor Day will bring. Especially ahead of the elections and the volatility that it could bring.”

“August is typically such a quiet month in both the markets and in Washington and clearly that is not the case for 2020,” she said. “Investors and issuers should keep their ears to the ground.”

Action was brisk in the primary as a social bond from an Illinois issuer and Texas deals came to market.

Proceeds will fund grants that target not-for-profits and communities battered by the COVID-19 pandemic and social injustice, with a particular focus on challenges faced by Blacks.

NYC to sell $1.4B GOs next week
New York City will sell about $1.4 billion of general obligation bonds, the comptroller’s office said Thursday.

Citigroup is expected to price the tax-exempts on Wednesday, Aug. 26 after a one-day retail order period. BofA Securities and Ramirez & Co. are co- senior managers.

Also Aug. 26, the city expects to competitively sell around $304 million of taxable fixed-rates.

The refunding achieved around $374 million in total debt service savings, with approximately $230 million and $141 million of debt service savings in Fiscal 2021 and 2022, respectively, according to a statement from the Mayor’s Bill de Blasio’s Office of Management and Budget, the Office of NYC Comptroller Scott Stringer and the TFA.

Refunding savings on a present value basis total $367 million, or 18.6%, of the refunded par amount, they said.

The exempts were underwritten through TFA’s underwriting syndicate led by book-running lead manager BofA Securities with Citigroup and Ramirez & Co. as co-senior managers.

“TFAs are indicative of market acceptance of New York paper, with the hope that the city returns to ‘normal’,” a New York trader said. “The city’s GO paper will be a good indicator of what the market should expect for general market sentiment of how it handles this type of deal in a contentious market and political time. The MTA deal was clear that there is demand, but the MTA deemed the rates unacceptable, which is why the fled to the Fed.

“When the city itself sells GOs, we’ll all be watching with a careful eye on the reception it will receive. New York City has been through tough times before — now is something very different. I’m hopeful that it will navigate this current mess,” he said.

In the week ended Aug. 19, weekly reporting tax-exempt mutual funds saw $1.831 billion of inflows, after inflows of $2.313 billion in the previous week, according to data released by Refinitiv Lipper Thursday.

It was the 15th week in a row that investors put cash into the bond funds.

The four-week moving average remained positive at $1.887 billion, after being in the green at $1.954 billion in the previous week.

The average seven-day simple yield for the 187 tax-free and municipal money-market funds was unchanged at 0.2% from the previous week.

The average, seven-day simple yield for the 775 taxable reporting funds remained at 0.03% from the prior week.

Municipals were weaker on the long end of the curve, according to the final readings on Refinitiv MMD’s AAA benchmark scale.

Treasuries were stronger as stock prices traded up.