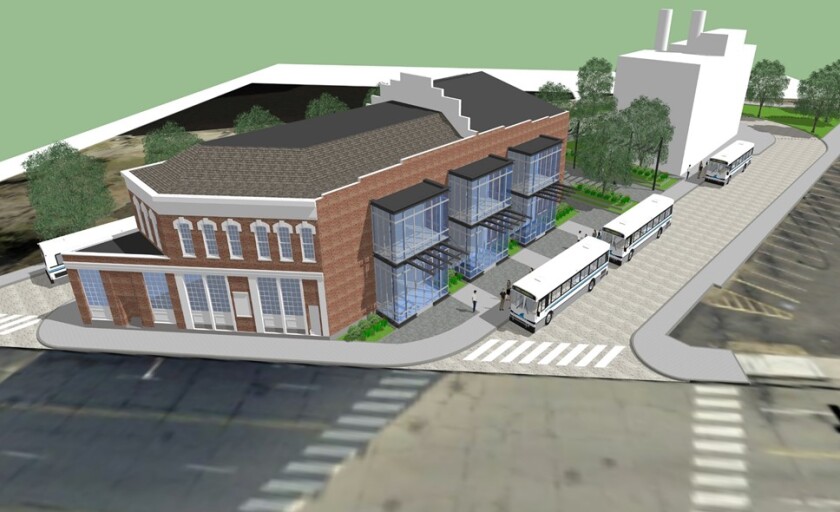 Rhode Island’s Department of Transportation is weighing a controversial plan to break up its main Kennedy Plaza bus hub in downtown Providence and create smaller hubs around the city.

Bond money that voters approved six years ago would fund the project.

State DOT officials, with the backing of Gov. Gina Raimondo, say the move would reflect changing employment patterns while alleviating congestion that engulfs downtown in the capital city.

Rider groups argue, among other points, that the new setup would move half the buses to remote locations, require additional transfers and shortchange the rest of the state by allocating much or all of the bond funds to a Providence-centric project.

Voters in November 2014 approved by a 60% to 40% margin a ballot measure calling for bonding of up to $35 million to fund “enhancements and renovations to mass transit hub infrastructure throughout the state.”

Infrastructure, state and local politics, economic development and even law enforcement are all at play in this saga.

While the Rhode Island Public Transit Authority operates the buses, RIDOT and its executive director, Peter Alviti, is in charge of the project. That has prompted some transit advocates to say that RIPTA has effectively been sidelined.

RIDOT in July released its proposed system, which called for decentralizing bus traffic at Kennedy Plaza and creating smaller hubs near the new Innovation and Design District — formerly called the Jewelry District — on land freed up with the relocation of Interstate 195, and near the train station uphill from downtown at the base of the State House grounds.

One of the sites would be on Dyer Street along the Providence River at a vacant National Grid site.

The train station, which serves Amtrak and Massachusetts Bay Transportation Authority commuter rail, relocated from Exchange Place downtown in 1986 after a decision to realign the tracks and bury a portion of the right-of-way to free up downtown land for redevelopment. A Marriott hotel now sits at the former station site.

“This plan will spread out the heavy concentration of buses and pedestrians from a congested Kennedy Plaza to strategic satellite locations at the Innovation District, the Providence train station, and along the edges of Kennedy Plaza, giving riders better access to their jobs, educational institutions, entertainment, and key intermodal transfers to major northeast metropolitan areas,” RIDOT spokesman Charles St. Martin said.

“There has been a long public process over the past few years on different versions and the latest iteration of the plan is undergoing public review now.”

Cost estimates, St. Martin said, are evolving, with contributions coming from other parties such as Amtrak and National Grid, but “the state will scope the project to stay within the 2014 bond amount that is available.”

This is the latest facelift plan for Kennedy Plaza, where the bus depot takes up about half the space. Previous iterations included a proposal for a tunnel.

Loitering and drug activity have been concerns in recent years, with downtown property owner Joseph Paolino, a former Providence mayor and U.S. ambassador to Malta under President Clinton, most vocal on the subject. City police in December announced charges against 23 persons following an undercover narcotics trafficking sting at the plaza nicknamed “Operation Bussed Out.”
Still, some riders and advocacy groups say they like a central location. Dyer Street by the Providence River, by contrast, is adjacent to parking lots and garages.

“It will require additional transfers for those riders changing from one bus line to another because not all lines will connect in Kennedy Plaza as they do now,” she said. According to Raub, the makeover could dissuade riders both current and potential.

“Other than some [bond] money that was used in Pawtucket, the state is using the rest of the money solely on a Providence plan that is not in the best interests of transit riders,” Raub added.

The process “has been flawed since the beginning,” said Sharon Steele, president of Jewelry District Neighborhood Association. “There’s been zero transparency, zero process and a total absence of data.”

Alviti, speaking at an Aug. 19 RIPTA board meeting, said his department, along with consultants and RIPTA staff, have been reducing the need for transfers. “We are continuing to work on that,” he said. “We continue to make progress on reducing the number of transfers by making shifts and revisions.”

Three Ways To Tackle Commercial Re-Occupancy In The New Normal
Ex-NFL Players On The Front Lines Of Tackling Inner-City Challenges
Here are the changing trends in the real estate market during the pandemic
New York Sees Its Last Rental Conversions After Passage Of Tenant Protection Law
Snowflake buyers beware: IPOs that doubled have poor track record after that debut