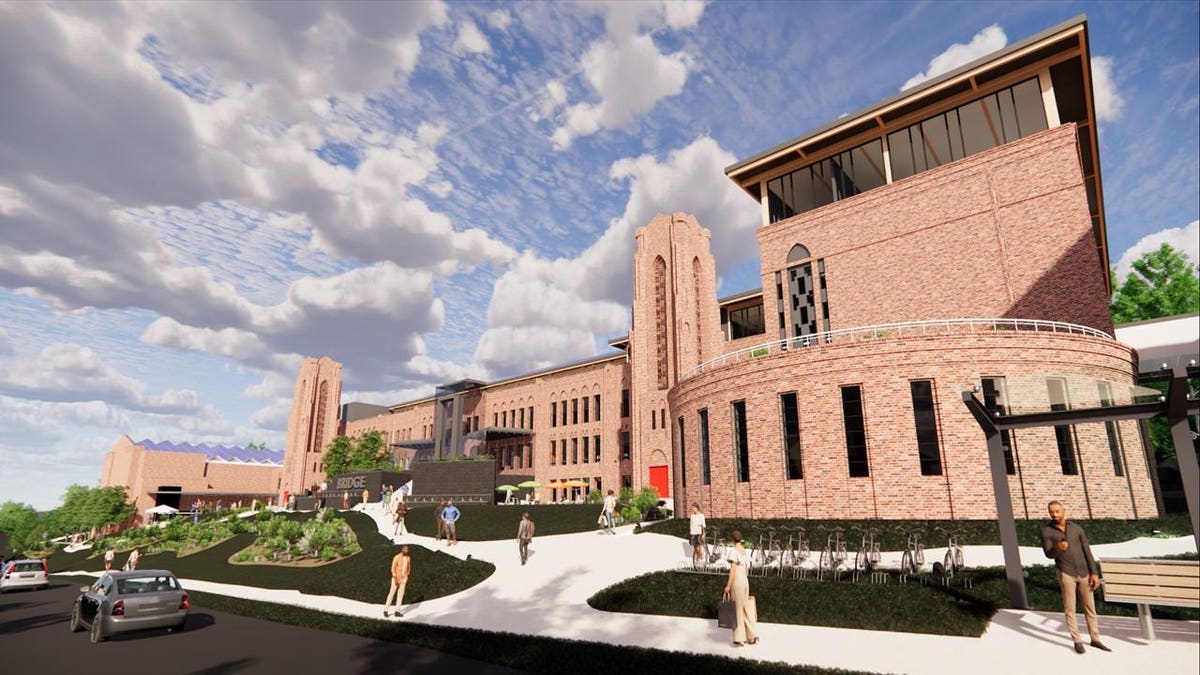 For example, a high school in Harrisburg, Pennsylvania, that has been vacant since 2013 will ultimately foster constructive collaboration.

The sprawling 115,000-square foot building is set to undergo a major transformation into an eco-village with housing, retail, co-working spaces, aquaponics farms, and medical and entertainment facilities.

The Bridge, a startup co-founded last year by CEO Gilliam and chief operations officer Corey Dupree, has leased the building and will advance plans for a co-working office space that is part of the broader eco-village plan. A groundbreaking ceremony is set for September 24.

The Ultimate Fan, founded in 2016 by Harrisburg native Dansby and chairman and CEO Theodore Holloway, shares a similar mission of giving back to communities in need by empowering and uplifting those held back by poverty.

It deploys athletes, entertainers and developers with a build and fill business model, encouraging those stakeholders to design, build, own and operate business and land development projects. Both organizations hope to spark a movement for entrepreneurs to develop thriving, sustainable communities globally.

Gilliam said the The Bridge initiative has been long in the making. “The Bridge is something that we have been working on and building for about a year and a half now, before the magnified issues of Covid and the Black Lives Matter movement,” he said.

“Issues like systematic racism or systematic oppression are issues that have been in place for hundreds of years in this country,” Gilliam explained. “There have been attempts to try and deconstruct that system, and some elements have changed, but there are also things that have gotten worse such as redlining and food desserts in a lot of school districts that don’t have funding coming to them due to their property values and homeownership levels. The Bridge is an observation of the past and an answer to solve issues that have been occurring for a while, as well as issues that Covid and The Black Lives Matter movement have magnified.”

Gilliam pointed out that The Bridge believes the way to combat systemic oppression is to counter it with a range of initiatives.

“We aren’t just putting a Band-Aid on the systematic issues that are present in our society,” said Gilliam. “We are really getting down to the root of these issues and creating solutions for them. The Bridge has five branches known as WELLP: Work, Eat, Live, Learn and Play. Each of these branches attacks the issues many inner cities face by providing valuable resources to the community.”

Dupree believes the vacant high school is the obvious place to start. “Harrisburg is our home,” he said. “It’s the epitome of where The Bridge pilot location should be. In saying this, I mean it is a food desert, has a low rate of homeownership, and has a disturbingly low state ranking in the education system, even though it is a capital city.”

Gilliam said Harrisburg has a legacy of systemic oppression. “There’s clear evidence of redlining,” he said. “There is one grocery store within the city limits, the school system is ranked in the bottom five of the state, and homeownership levels are extremely low. Building The Bridge in Harrisburg will produce quantifiable results. We know since we lived there that it will progress the city, and eventually other cities as well.”

The Bridge has a bold vision for economic renewal. Gilliam explained, “We are providing quality adult education that often is not provided in inner-city public schools due to lack of resources, transforming food deserts into food oases by growing food on site and providing groceries for the community, offering different types of housing from affordable to upper class with a heavy focus on workforce housing, offering a co-working space for entrepreneurs in the area and providing entertainment for the community with our arcade, which will feature a lot of virtual reality.”

Through incubator spaces and community partnerships, The Bridge seeks to provide workforce preparedness for the community.

“We plan on working with local contractors to hopefully take on apprentices, in some regard, to help them become more skilled in their crafts,” said Dupree. “This creates not only jobs, but more importantly, bosses and business owners.”

Gilliam added, “The Bridge will focus on workforce preparedness in our Learn branch which will lean heavily into workforce development, job training, sustainable business practices, financial literacy courses and more. The Bridge will lay the foundation for people to create jobs and businesses, not just having a job within the community.”