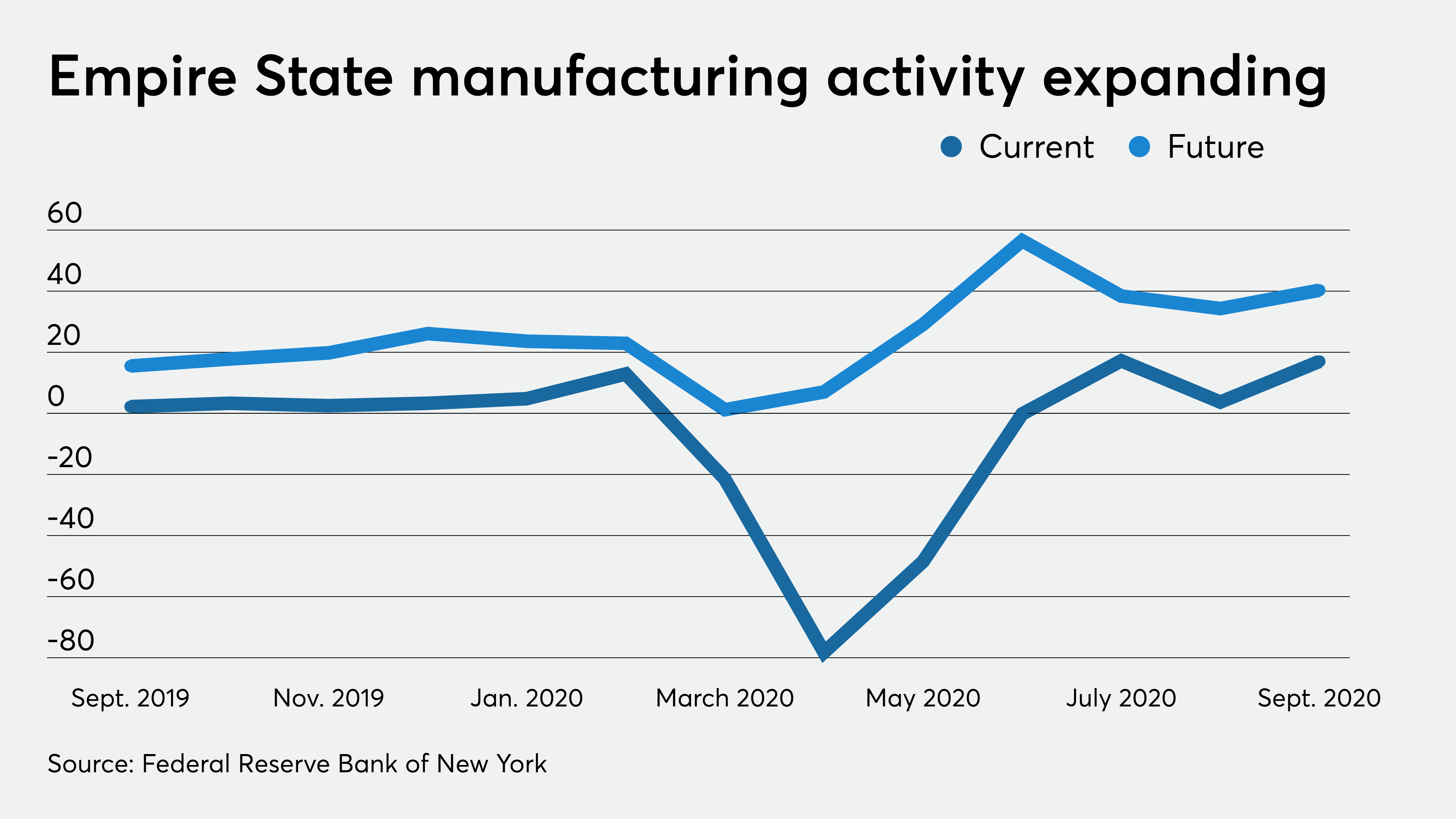 “We expect manufacturing production to continue to increase in the near term as businesses replenish inventories,” said Roiana Reid, U.S. economist at Berenberg Capital Markets. “The inventories-sales ratio at retailers is extremely low and surveys indicate that many businesses perceive their inventories as being ‘too low.’”

Manufacturing activity grew at “a solid clip” in the New York region in September, according to the Empire State Manufacturing Survey, released Tuesday by the Federal Reserve Bank of New York.

The current general business conditions index jumped to 17.0 in September from 3.7 in August.

“The Empire State manufacturing sentiment index jumped to its second highest reading in 22 months, indicating that factory activity in the New York region increased at a much faster rate in September than it did in August,” Reid said. “The share of manufacturers reporting an increase in business activity increased by 6.2 percentage points to 39.8%, and the share reporting a decrease fell by 7 percentage points to 22.8%”

The new orders index soared to positive 7.1 from negative 1.7, while the shipments index grew to 14.1 from 6.7. Unfilled orders narrowed to negative 9.4 from negative 14.0, the Fed said.

The delivery time index rose to 5.0 from 1.3, while the inventories index narrowed to negative 3.6 from negative 10.7 in the prior survey. The prices paid index climbed to 25.2 from 16.0, while the prices received index grew to 6.5 from 4.7. The number of employees index crept to 2.6 from 2.4, while the average employee workweek index reversed to positive 6.7 from negative 6.8, the Fed said.

Looking ahead six months, the general business conditions index gained to 40.3 from 34.3 last month. The new orders index increased to 39.1 from 37.2, while the shipments index rose to 39.0 from 30.8, and unfilled orders narrowed to negative 3.6 from negative 5.3 the Fed said. The delivery time index fell to negative 5.8 from negative 3.3, while the inventories index reversed to positive 0.7 from negative 0.7.

The Empire State manufacturing index “was driven by increases in new orders (+8.8 points) and shipments (+7.4 points), and the index for future conditions jumped six points to the highest level since June,” said Scott Anderson, chief economist at Bank of the West. “At least, manufacturing firms in the New York region are more upbeat about prospects over the next six months.”

Economists expected an increase of 1.0%.

Despite the streak of monthly gains, it is still 7.3% lower than pre-pandemic levels, according to the Fed, and 7.7% below year-ago levels.

“The manufacturing sector showed increasing signs of slowing in August with industrial production rising 0.4%, the weakest monthly gain since growth resumed in May,” Anderson said.

“Capacity utilization rose for the fourth month in a row, but remains considerably lower than its long-run average, indicating considerable slack in the manufacturing sector remains,” Anderson said.