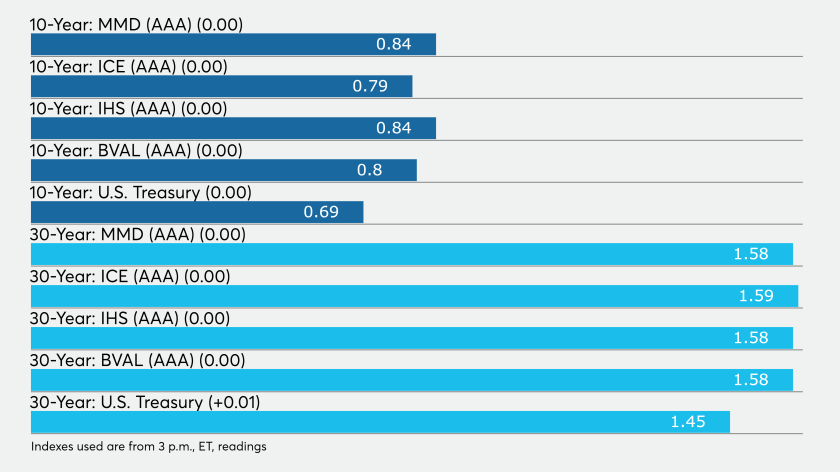 A week of increased volume is in store for investors from issuers selling airport bonds for Chicago O’Hare and exempt and taxable bonds for the New York Yankee’s Stadium — a $12.6 billion calendar full of credits that are under the analyst microscope.

Taxable issuance remains a strong presence on the new-issue calendar, a trend that is seen continuing for the rest of the year.

BofA Securities has increased the size of their estimate for taxable issuance this year.

While both tax-exempt and taxable municipals remain cheap on a relative value basis, issuers may view taxable muni rates as favorably low and tax-exempt rates as too high, according to BofA.

On Friday, municipals finished little changed, with yields remaining steady along most of the AAA GO scales, however, high-yield munis can still be attractive for some buyers, according to Eric Kazatsky, senior municipal strategist at Bloomberg Intelligence.

“Despite underperformance vs. higher-rated investment grade munis, a case can still be made for high-yield municipals given adjusted relative value views vs. like-rated alternatives,” he said. “However, the sector will likely continue to see weaker demand as buyers hunt for yield in tax-free vehicles, but at the same time want to avoid headline risks and COVID-19-induced credit issues.”

Some buyers may be ignoring lower historical default ratios and less volatility vs. other fixed-rate alternatives if they are focusing on avoidance as an investment tactic.

“With option-adjusted spreads (OAS) at the wide end of their ranges, and absent a full-blown shutdown scenario again, the sector could see spreads drift back toward historical norms over the next year,” Kazatsky said.

“If you’ve been in municipals for more than five minutes, then you know the market hangs on every last ounce of fund-flow data to signal the depth and direction of investor sentiment,” he said. “That’s why the bifurcation of investment grade and high yield municipal flows for 2020 indicates COVID-19 wounds are still very apparent when moving lower in credit.”

He said that despite large outflows in March, investment-grade credits have recovered and have produced $15 billion of new positive fund flows.

“Conversely, high-yield municipals are down on the year by $7.9 billion,” he said.

Caution prompted by market uncertainty is surfacing in the municipal market, although some say that hasn’t stopped brisk reinvestment demand.

“In general, there is a little bit of a risk-off, cautious tone,” a New York trader said Friday. The upcoming presidential election and the COVID-19 pandemic top investors’ list of worries, he said.

For instance, the trader said that negative flows over the past three week, particularly among the high-yield municipal mutual funds point to a cautious, risk-off mindset as high-grade funds continue to see positive flows.

Howard Mackey, managing director at NW Financial in Hoboken, N.J., said the negative high-yield fund flows are a result of the overall historically low yields and have come on the heels of the previously wide gap between high-grade and high-yield.

“People were trying to strive for yield and that drove the high-yield market,” Mackey said.

“When rates came down, people started to take a look at what the economy is telling us,” he said. “With no stimulus package we will probably have some serious headwinds because of the economic impact and that will not bode well for high-yield paper.”

He said high-yield bonds will continue to be “precarious” during the current economic climate, but flows into high-grade mutual funds should outpace that of high-yield funds.

“There is a lot of cash coming into mutual funds as money has to be put to work,” Mackey said, adding he expects that trend to continue “even in the face of low rates.”

Overall, Mackey said the municipal market has a fairly strong tone and despite the fact that yields have been virtually unchanged for the past few sessions, demand has remained strong.

Specialty state paper demand has been extremely high, Mackey said, adding he expects that to continue into the fourth quarter.

With the heavy demand and lack of supply in specialty states, deals with strong and aggressive pricing are still getting oversubscribed, he noted.

“That gives you an idea how much demand there is for specialty state paper,” Mackey said.

Overall, he said the strong demand is leading to positive flows among high-grade funds, despite some cautiousness over rate volatility.

“Yields are going to be steady in the muni world and you will have buyers come in and my prognosis is that yields will go lower in 10-years” and beyond, Mackey said.

The stock market, he said, represents fairly good value, but in the short term it appears “dicey” for conservative investors.

“If investors have their money managed professionally they will look for diversification,” chiefly into investment-grade fixed-income products, such as municipals, he said.

Primary market
IHS Ipreo estimates supply for the upcoming week at $12.6 billion. The calendar is composed of $10.4 billion of negotiated deals and $2.2 billion of competitive sales.

Philadelphia, Pa., (A2//A/) is coming to market with $372 million of airport revenue and refunding bonds.

JPMorgan is set to price the Portland International Airport, Ore.’s (NR/A+/NR/NR) $348.72 million of Series 27A AMT and Series 27B taxable revenue bonds on Wednesday.

Turning now to sports, the New York City Industrial Development Agency (A2/AAA/NR/AA+) is heading into the market with a $924 million deal for Yankee Stadium.

The Sports and Exhibition Authority of Pittsburg and Allegheny County, Pa., (A1/A+//) is coming to market with a $112.45 million sale.

“If I were really trying to predict the future, I clearly wouldn’t be trading municipal bonds,” he said.

Out longer with a 5% coupon in 2045, a Washington State GO (AAA/AA+/AA+) traded at 1.63%, a mere plus-five basis points higher than MMD, four basis points up from ICE and five up from IHS.

Puerto Rico bonds were getting a huge boost on Friday after the Federal government announced an additional $13 billion in aid to the Commonwealth to repair damage from Hurricane Maria three years ago, ICE Data Services said. About $9.6 billion will go to the island beleaguered electric utility PREPA to rebuild the power infrastructure.

Lynne Funk contributed to this report.

September existing home sales jump 9.4%, but ‘prices are rising too fast’ as supply remains tight
A look at stock market history around elections and whether politics really matter
PDI: An Attractive 10.70% Yield, Recent Dip Creates An Opportunity
Stocks making the biggest moves in the premarket: Intel, Mattel, Gilead, Shake Shack & more
Goldman is clawing back or cutting millions in pay from CEO Solomon, Blankfein and others over 1MDB