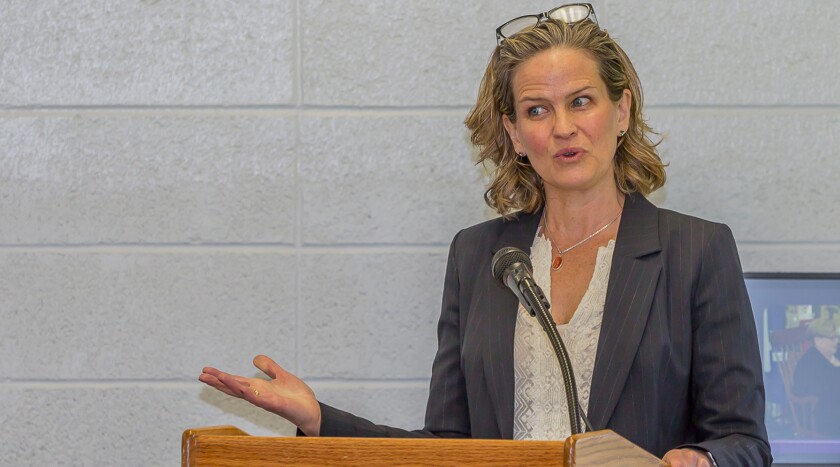 A $3.3 billion budget proposal from Nassau County Executive Laura Curran hinges on a debt restructuring plan from which she previously retreated after Republican opposition earlier in August.

The Democratic county executive’s 2021 spending plan announced last week is linked to a proposed refinancing of outstanding bonds through the triple-A-rated Nassau Interim Finance Authority that would achieve an estimated $285 million in interest savings next year.

“Restructuring bonds would not be necessary or justifiable in an ordinary year,” Curran said in a statement. “Extraordinary times as these, however, call for this extraordinary, yet targeted and appropriate, measures.”

The NIFA board of directors hired Goldman Sachs in June to lead a potential restructuring effort.

Nassau is facing a projected $385 million budget gap for the current fiscal year ending Dec. 31 and another $364 million deficit in 2021 due largely to a big drop in sales tax revenues caused by the COVID-19 pandemic. Curran is also seeking legislative approval to refinance additional county and NIFA debt to net an estimated $150 million of debt savings in 2022.

Any NIFA refinancing of outstanding county debt requires approval from the county legislature, which is made up of 11 Republicans and eight Democrats. Legislature Presiding Officer Richard Nicolello, R-New Hyde Park, and other Republican legislators balked at the borrowing plan over the summer because of concerns the refinancing would extend the life of NIFA’s debt.

“The Majority will conduct a thorough review and analysis of the County Executive’s budget to ensure it is fiscally responsible and does not put additional burdens on Nassau taxpayers already struggling with the financial impact of COVID-19,” Nicolello said in a statement.

Nassau’s general obligation bonds are rated A-plus by S&P Global Ratings, A2 by Moody’s Investors Service and A by Fitch Ratings. Fitch revised the county’s credit outlook to negative from stable last month citing its $385 million budget gap and lagging sales tax collections since the virus’s outbreak in March closed many non-essential businesses.

“Since they are already planning to use all their available reserves to help fill this year’s gap, the remainder of the shortfall would have to made up some other way — expenditure cuts, revenue increases or one-time solutions (deficit bonds, land sales, etc.),” said Fitch anakyst Amy Laskey. “We expect the county will either receive approval for the refinancings or will make the necessary cuts to offset the revenue shortfall unless the federal government passes an aid package for states and local governments.”

The budget proposal is down from a $3.55 billion spending plan approved last year for the current 2020 budget cycle. She said $69.5 million of savings would be achieved by eliminating 329 vacant positions. Other contractual savings proposed for the budget include $16.7 million from a NICE Bus system contract and $12.8 million in police overtime.

Curran’s budget plan will need approval from the county legislature and the NIFA board of directors. NIFA, which has imposed a control period on county finances since 2011, was given increased bonding authority under the 2021 New York State budget signed by Gov. Andrew Cuomo extending its oversight powers to 2051 from 2025 if needed.

”The County is facing an unprecedented fiscal emergency,” NIFA chairman Adamy Barsky said in a statement. “NIFA is a AAA-rated credit and its new expanded authority from the governor and state legislature will be available to the county to help them weather this storm.“