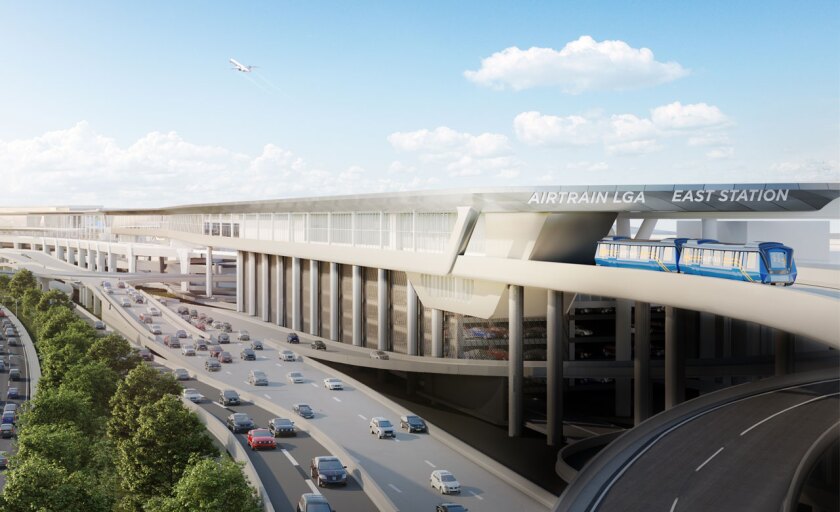 A project to bring a rail link to New York’s LaGuardia Airport is closer to breaking ground in the face of fiscal headwinds created by the COVID-19 pandemic.

The Federal Aviation Administration released its draft environmental impact statement for the proposed AirTrain last month with the public comment period scheduled to conclude on Oct. 5.

The Port Authority is working with the New York Metropolitan Transportation Authority to build the elevated train link connecting the airport with the Mets-Willets Point station next to Citi Field offering transfer options to the Long Island Rail Road or the 7 subway line. The promised commuting time to the Queens airport from midtown Manhattan would be less than 30 minutes.

“LaGuardia is the only major East Coast airport without a direct mass transit rail connection and that is simply unacceptable,” said Port Authority executive director Rick Cotton during a Sept. 21 online briefing hosted by the Association for a Better New York. “What we need to do is get people out of their cars and only a rail mass transit link will do so.”

The FAA review arrives amid a major traffic lull at the airport because of the coronavirus pandemic. The lost traffic and revenue threatens to throw a monkey wrench into the Port Authority’s long-term capital plans.

Since the onset of the pandemic in March, LaGuardia passenger traffic has fallen considerably. It was down 80% year-over-year for the week of Sept. 14 to 18th, according to Cotton.

The Port Authority has budgeted $2 billion for the AirTrain project in its $37 billion 10-year capital plan that runs through 2026. It wants $3 billion in federal assistance from Congress to preserve the capital program as it grapples with massive revenue declines due to ridership dips during the ongoing COVID-19 pandemic.

The CARES Act approved by Congress this past spring produced $450 million of Federal Aviation Administration grants for Port Authority airports, but no funding for transit projects. Prospects for an additional stimulus package out of Washington have stalled.

The AirTrain proposal has also run into community resistance including from U.S. Rep. Alexandria Ocasio-Cortez, D-N.Y., whose district includes the airport. She said in July that she opposed federal money for the project because it would not provide sufficient access to the airport for Queens residents.

She urged alternatives to the AirTrain such as extending the N train from Astoria, dedicated bus lanes near the airport or ferry service.

“Until such time as a new route is identified, or the community’s concerns are sufficiently alleviated, no federal COVID-19 relief funding should be granted to the Port Authority for the purpose of constructing the AirTrain,” Ocasio-Cortez said in a statement.

Many transit advocates have criticized what they call the “backwards AirTrain” because it would send riders from Manhattan east past the airport on commuter rail or the subway before sending them back to the airport on the AirTrain.

Jonathan Peters, a finance professor at the College of Staten Island, said the LaGuardia AirTrain is an important project for New York City’s long-term financial viability that should be prioritized if adequate funding is available. He said without necessary support from Congress the agency me forced to defer full funding of the project for a couple years until revenues stabilize.

“The challenge with a big organization like the Port Authority is they have so much going on with their capital plan and they have so much overhead related to maintenance of the existing system,” Peters said. “You have to look at the long game.”

The Port Authority’s long-range capital plan also includes a $2.1 billion replacement of the AirTrain system at Newark Liberty International Airport that is considered a key component of the agency’s $2.4 billion overhaul of the facility.

The agency is also targeting a $13 billion redevelopment of JFK International Airport through a public-private partnership and replacing the Port Authority Bus terminal in midtown Manhattan.

While airport traffic has been down considerably since COVID-19 began in March, Cotton said the AirTrain is vital for when air travel returns to pre-pandemic levels. He estimates that the mass transit link, which was first pitched by Gov. Andrew Cuomo in 2015, will attract between six and 10 million annual riders.

Mitchell L. Moss, director of New York University’s Rudin Center for Transportation and Management, is bullish on LaGuardia seeing soaring passenger growth in the near future despite recent struggles in the aviation industry. Moss noted that major airlines have reduced the number of airports in which they provide service including the northeast cities of Pittsburgh and Hartford, Connecticut, which he said will provide more incentive to utilize LaGuardia.

“LaGuardia Airport, is going to be more, not less important as a major regional hub serving cities and suburbs to the north and east,” Moss said. “The proposed AirTrain will be essential for travelers from the surrounding region who can park at Willets Point and take the AirTrain to LaGuardia.”

Tom Wright, president and CEO of the Regional Plan Association, testified in support of the LaGuardia AirTrain connector during a Sept. 22 FAA hearing stressing the need for a mass transit system for when airport returns to 2019 volume levels of 31 million passengers. Wright noted that for the project’s success will be keyed by interagency coordination between the Port Authority and MTA to ensure there is enough trains in service on the LIRR Port Washington branch that runs through Mets-Willets Point.

“The entire region needs the MTA to be able to continue to provide reliable and frequent transit service, and the ultimate success of the LGA AirTrain will depend on the quality and frequency of the MTA’s service on the LIRR Port Washington line,” Wright said. “Providing a rail transit link to LGA is critical for the success of the region, and this proposal is the best way to accomplish that.”

The MTA itself is facing a massive financial crisis and warning of drastic cuts to subway and commuter rail services.

Cotton said the Port Authority has worked closely with the MTA since the AirTrain would be built above the Mets-Willets Point LIRR station.

“There has been extensive coordination in terms of how the construction process and the new facilities would interest with the MTA facilities at Willets-Point,” Cotton said during a Port Authority media briefing after Thursday’s board of commissioners meeting.

The New York Transportation Development Corp. sold $2.4 billion of special facilities bonds in May 2016 for LaGuardia’s ongoing $8 billion modernization project, which includes plans for a new 35-gate Terminal B, central hall and a connecting concourse. The conduit issuer also sold another $1.39 billion of special facilities bonds in 2017 for redevelopment of Delta Air Lines Terminals C and D.

Sixteen of the planned 18 gates in the 43,000-square-foot Terminal B has opened thus far. The entire Delta project is slated for completion by 2026.

S&P Global Ratings downgraded the Port Authority’s bond ratings one notch to A-plus from AA-minus in June citing plummeting usage levels at all its transportation assets during the pandemic. Port Authority debt is rated Aa3 by Moody’s Investors Service and AA-minus by Fitch Ratings.

The Port Authority had $22.2 billion of outstanding consolidated bonds as of March 31, according to an April 14 disclosure to bondholders.