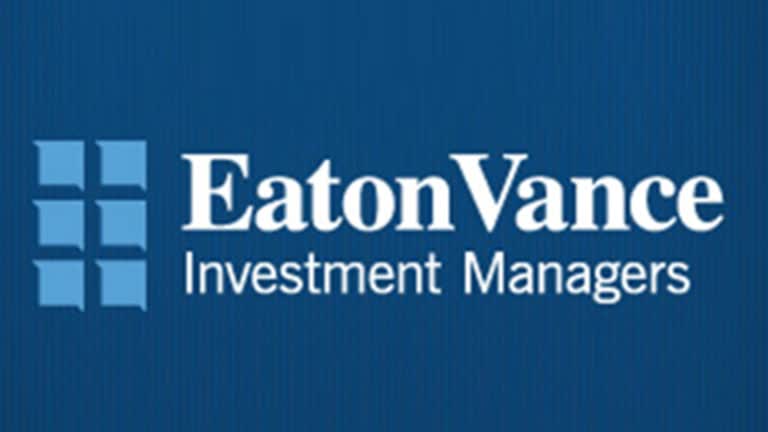 Eaton Vance Tax-Advantaged Global Dividend Income Fund (NYSE:ETG) has been able to pull off some excellent returns for being a fund with a global focus, even while they have been overweight financials and increasing the exposure as well. Tech still appears in several positions in its top ten listings. The fund has been able to put up an attractive track record – even while being a fund with a global focus. The distribution has been maintained since 2009, and March’s crash sent them back to a widened discount in line with some of their widest.

ETG is held in our Taxable Income Portfolio due to its tax-advantaged focus of “seeking to distribute a high level of dividend income that qualifies for favorable federal income tax treatment.” They can do this through a couple of ways; distributing out capital gains and focusing on investments that pay qualified dividends.

The fund has an investment objective to “provide a high level of after-tax total return.” To achieve this, they invest fairly flexibly in “primarily global dividend-paying common and preferred stocks.” The overwhelming majority of their portfolio is composed of equities. So, while they are somewhat of a hybrid fund, or at least the managers have the option to go hybrid, I would generally consider them an equity fund most of the time.

The fund is sizeable with total managed assets of $1.69 billion. They use what would seem like a moderate amount of leverage at 23.6%. This is quite a bit lower when a lot of funds put it right around 30% or above mark. Remember, a manager earns fees on all managed assets, not just the net assets. Thus, maxing out leverage is an easy way for them to max out their personal earnings potential. Of course, we can’t complain when a fund does that, if they are operating successfully.

Total expenses come in at a very reasonable 1.22%. This can be much higher for globally-focused hybrid funds. When including interest charges, we are looking at a total expense ratio of 2.23%.

Even while their portfolio concentrates on more of a global focus, they have been able to put up an excellent track record over the long term. Short term, it hasn’t been terrible either.

As of the end of August, they have been able to put up double-digit NAV and share price total returns.

On the shorter-term YTD performance, its NAV has performed rather well. Again, consider the fact that it has a global tilt and financials are its largest sector – it is truly surprising to see the resilience of this fund. 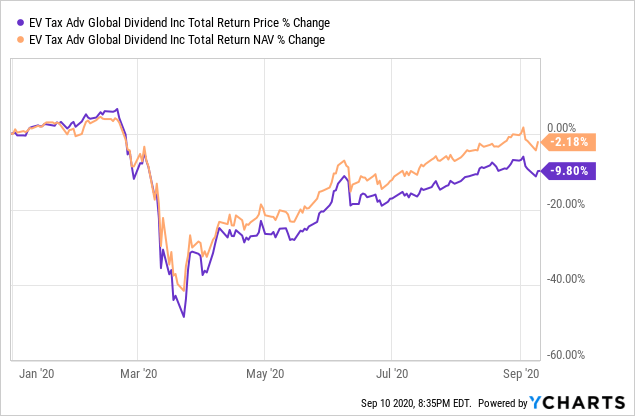 Where we see the biggest opportunity is the fund’s share price has lagged considerably. This has pushed the funds discount to an excessive discount of 12.29%. Once again, opening up an opportunity to buy the fund. I’ve covered this fund for years now and have been adding to my position when it reaches these types of levels. The last 1-year average is a 6.78% discount. The 5-year average is also a tighter discount of 7.29%. The 1-year z-score comes in at -1.42.

Even further, this puts the fund’s discount at a level just about as wide as we get if we exclude the 2008/09 years. 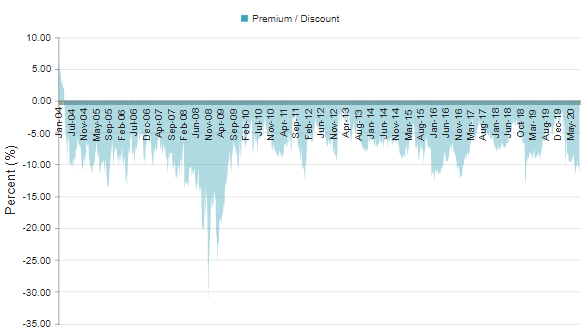 The fund currently pays an 8.33% yield to shareholders. On an NAV basis, this works out to 7.30% – thanks to its extremely large discount, the fund has to earn considerably less than shareholders receive. The distribution is paid monthly at a rate of $0.1025 and has been maintained since the cut the fund underwent after the GFC in 2008/09.

As of their latest Semi-Annual Report ended April 30th, 2020, they have once again maintained a high level of net investment income. This is interesting. As they are an equity fund, we generally would rely on their capital gains to fund a large portion of their distribution, as we see with many equity funds. However, the bulk of the distribution is covered by NII for ETG. This has been the case all except for the year 2018 – where NII dropped considerably. The reverse back to their “usual” trend is encouraging to see as still being maintained.

They have high portfolio turnover, so this could be a result of why the drop in NII previously. The lowest amount of turnover was actually in 2018 with 110%. Ironically, this year is looking to be the most active for them. For 6 months, they are showing 112% for their portfolio turnover. If we annualized this rate out, we are looking at a 224% turnover. The only other highest amount was in 2016 at a 200% turnover.

High or even low turnover isn’t a determining factor worthy of the investment itself. It is more a function of if it is doing good for the portfolio. As we highlighted above, performance has been comparatively strong. I would conclude high turnover has worked out in our favor from ETG.

As we can see, NII coverage came in at around 89% for the fund; a drop from the last full year NII coverage of 99%. Considering the amount of turnover and the fact that the report is showing for two of the most volatile months we’ve had in the market since Q4 in 2018, I wouldn’t be too concerned with this relatively minor drop.

With their high level of NII, it does mean that their tax character is classified generally as ordinary income. Even though this generally wouldn’t be tax-efficient, they have been able to invest in companies that pay qualified dividend income. ETG, along with the majority of the other Eaton Vance funds, has been able to. This does mean generally lower tax obligations for most investors. 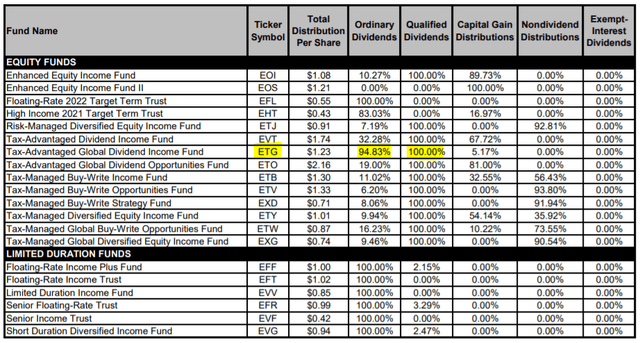 Holdings – Overweight Financials With A Global Tilt And Still Winning

What I find most fascinating, and have pointed out several times in this piece above, is how they are overweight financials and are still winning. The global tilt is also another thing that has generally been lagging fund’s performance as well. For ETG to be able to climb both these hurdles to put up some double-digit 10-year annualized returns is impressive.

The fund isn’t even just a little bit global. They have the largest portion of their portfolio in “foreign common stocks.” 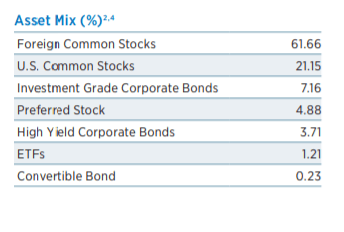 This has generally been an uphill battle for performance in many other global focused funds. 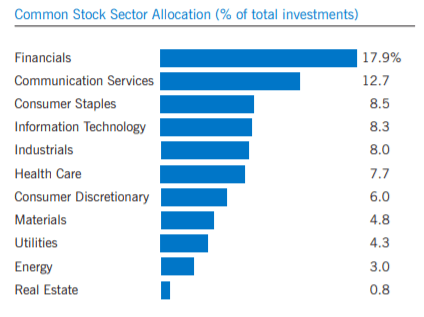 Then, we have to overweight focus on financials at nearly 18% of the portfolio, though communication services, consumer staples, and tech follow that sector, all of which have been performing incredibly well this year too. This was an increase from their Annual Report when they reported their sector exposure to 13.3% financials, 12.3% industrials, and 10.6% tech. It seems they are going even more overweight financials, which, I believe, will pay off handsomely and have been shifting my portfolio to also include the beaten-down sector of financials.

As of July 31st, 2020, their portfolio shows some of the usuals at the top of the tech sector. However, this is followed by all foreign positions, giving them a truly unique composition that we don’t see in other CEFs, once we get past the tech names. 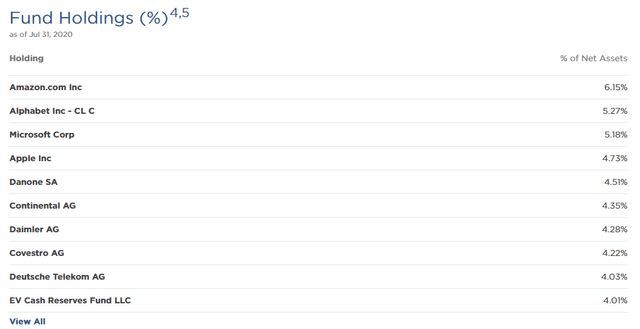 What I find a bit interesting is the top two positions belonging to Amazon (AMZN) and Alphabet (NASDAQ:GOOGL) (NASDAQ:GOOG) as they don’t pay dividends. However, this is followed by the other tech giants Microsoft (MSFT) and Apple Inc. (AAPL), and they do pay dividends that are growing. We also see that the top ten is rounded off by a cash position of 4.01%, meaning that they still have some cash that they could put to work. 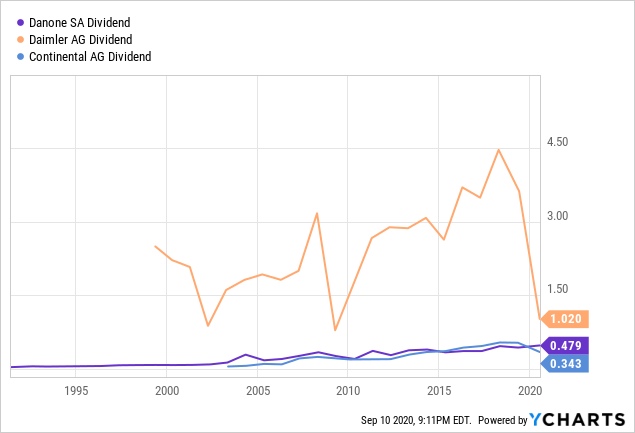 What could damage NII coverage going forward is that many foreign companies don’t necessarily focus on paying consistent and growing dividends. Rather, they pay what they seem is appropriate. Many of these foreign names also trade OTC in the U.S., plugging in those OTC tickers, and we can take a look at the chart above.

Daimler AG (OTCPK:DDAIF) seems to be an inconsistent payer. As a vehicle maker, this can be quite appropriate as they feel booms and busts significantly. Additionally, they make annual payments, which isn’t the norm for American companies.

Then, we have Continental AG (OTCPK:CTTAY). They “develop products, systems and service for customers in various industries worldwide.” Most individuals are probably familiar with them for the tires they provide. (Funny enough, I have a pair of adidas (OTCQX:ADDYY) with the rubber outsoles being Continental.) They also appear to have needed to trim their dividend by a fairly large amount after several annual increases. They also pay annually.

Conclusion – A Solid Bet, Management Has A Proven Track Record

I would say that, overall, the management team has been able to provide consistent and attractive returns. Even while they have a global focus, they have been able to put up long-term success. Which, we don’t see in some of their competitor funds with the same focus. The hybrid structure also allows them some considerable flexibility, though they have largely remained an equity holding fund.

Their underlying portfolio has a lot of turnover, though they focus on larger dividend payers. The companies from overseas, in Europe, can pay a fairly inconsistent dividend. Despite this, ETG has proven to be able to still turn out a high NII coverage, essentially turning these unattractive annual dividend payers into monthly payers via ETG. As high NII coverage isn’t essential for an equity fund, it is more of a bonus in this case. This leads me to believe that its current dividend is quite reasonable.

Thanks to the large discount at the moment, investors get to collect an 8.33% in distribution yield, while the fund has to turn out 7.3% to achieve this. That is an amount the fund has historically been able to achieve. Though the fund cut in 2008/09, the distribution has remained stable at the same monthly rate since then. Should another black swan event happen, I wouldn’t penalize them for cutting – just as I don’t penalize them for cutting during the last crash.

At the CEF/ETF Income Laboratory, we manage ~8%-yielding closed-end fund (CEF) and exchange-traded fund (ETF) portfolios to make income investing easy for you. Check out what our members have to say about our service.

To see all that our exclusive membership has to offer, sign up for a free trial by clicking on the button below!

Disclosure: I am/we are long ETG, MSFT. I wrote this article myself, and it expresses my own opinions. I am not receiving compensation for it (other than from Seeking Alpha). I have no business relationship with any company whose stock is mentioned in this article.

Additional disclosure: This article was originally published to members of the CEF/ETF Income Laboratory on September 10th, 2020.

Cramer calls this stock market environment ‘the most speculative’ he’s ever seen
Square and PayPal may be the new whales in the crypto market as clients flock to buy bitcoin
Relativity Space adds $500 million to ‘war chest’ for scaling production of 3D-printed rockets
The Best Home And Decor Holiday Gifts of 2020
How to break the late rent, missed mortgage payment cycle