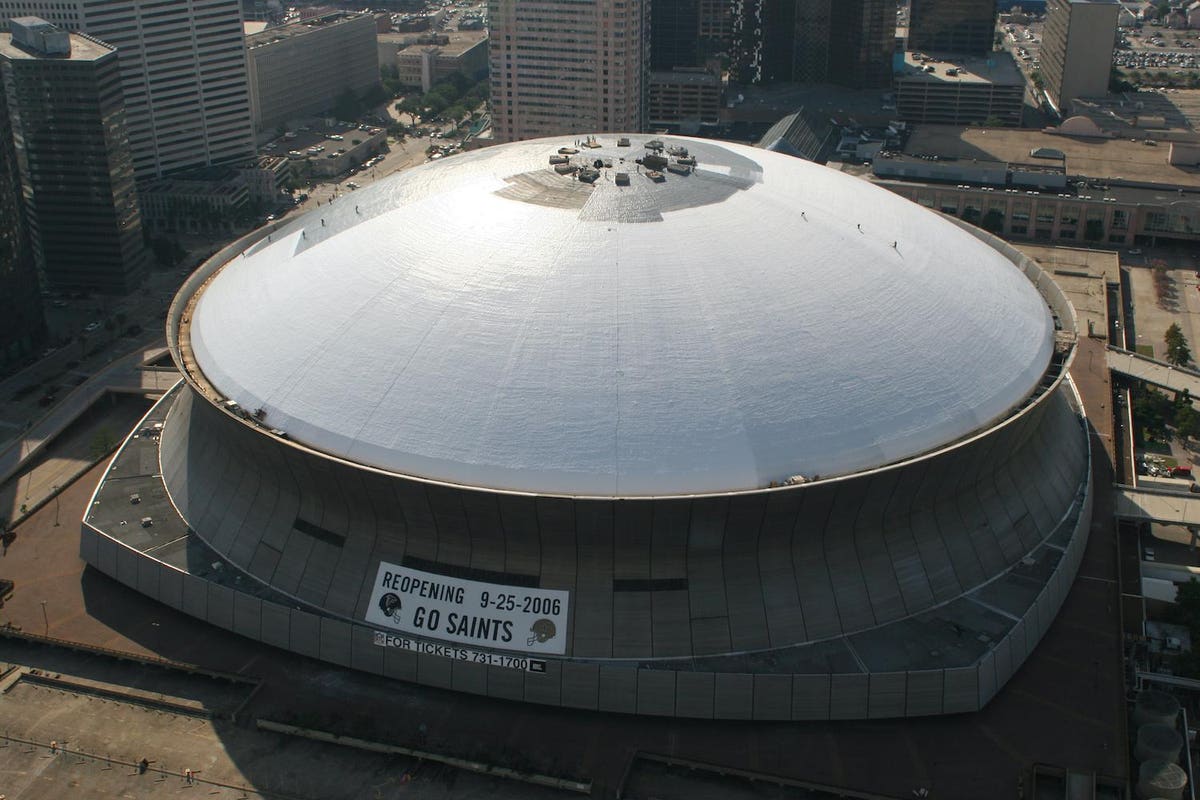 This recent flooding in New Orleans reminds us that all buildings need to be built to higher, with more resilient standards. Famously the Mercedes-Benz Superdome was badly damaged during Hurricane Katrina on August 29, 2005 although it had to shelter about 16,000 residents whose homes were destroyed, as well as shelter about 150 National Guardsmen for six long days.

Shortly after Hurricane Katrina in 2005, Trahan Architects was selected to be the lead architect and managing partner of the team that restored the iconic Superdome on an accelerated schedule, allowing it to reopen on September 25, 2006, under budget and ahead of schedule with a total cost of over $200 million.

Hurricane Katrina caused more damage than any other natural disaster in U.S. history. The storm cost an estimated $250 billion dollars in total physical damage as well as economic impact to the city. During the storm and its aftermath, more than 770,000 residents were displaced from the city.

The restoration of the Superdome was a monumental feat completed in approximately 8 months. As estimated 3.8 million gallons of water as well as 4,000 tons of debris and trash were removed as part of the renovation.

As part of the renovation, the entire 400,000 square feet of aluminum panel exterior skin was replaced. The new anodized aluminum panels were designed to look, in shape and color, like the original 1975 Curtis & Davis design, but will outperform the original metal skin in terms of its structural capabilities, air and rain infiltration, and insulation values.

The hurricane badly damaged over 30 percent of the exterior skin in random places. The way the building was originally designed, removing one panel necessitated removing everything above it as well, so replacing only damaged panels was not an option. The new panels are affixed without rivets, so that if a single panel is damaged it can be replaced without affecting the adjacent panels, allowing for better maintenance throughout the life of the building.

I had the opportunity to interview architect Victor F. “Trey” Trahan III, FAIA, the lead architect for Trahan Architects who has done impressive work in restoring the Dome.

Was this the first renovation of the Dome since Katrina?

What were some of the faults in the Superdome previous to the hurricane that made it vulnerable?

The Superdome had a roofing system that had the potential to be vulnerable to hurricane-force winds and an anodized aluminum exterior skin which when damaged, required excessive panel removal to replace a singular section. Additionally, the location of some of the base building infrastructure systems made them vulnerable to flooding.

What changes are you planning for the new Superdome that will protect it from future hurricanes?

We already replaced the anodized aluminum skin to a more contemporary anodized aluminum rain screen which could be replaced in a singular panel fashion instead of removing all of the panels in that bay. We’ve also relocated some of the important equipment that was located at the ground level. We’ve replaced the roof with a system that is much more conducive to an environment with hurricane-force winds and pull out resistance.

What additional changes are you making to the Superdome to make it more accessible for fans?

We are removing the sideline ramps and relocating vertical circulation to the corners by creating vertical atriums that allow for people to enter at the plaza level and ascend vertically through elevators and escalators to their designated level. Additionally, we are creating more opportunities for universally accessible seating. We are also creating standing-room-only ticketed areas for fans to view the game in a more interactive and social setting than in standard seats. We are working with the client to create a more economically diverse price point for fans to enjoy live games and events.

When will this project be completed?

The Superdome project is a multi-phased, multi-year project with varying completion dates. The client group is exceptional to work with and we are privileged to continue our longstanding collaboration with them.

How to break the late rent, missed mortgage payment cycle
Munis firm as market looks ahead to next week’s $7.7B new-issue slate
iShares Asia 50 ETF: A Mixed Bag
A record 19.4 million homeowners can now save big on a mortgage refinance, as rates hit another new low
Evictions have led to hundreds of thousands of additional Covid-19 cases, research finds