With President-elect Biden promising higher tax rates, high income investors might want more tax-exempt income investments. While he says only the top 2% of returns will be effected, massive deficits have others doubting that promise can hold. Investors also have concerns that COVID-19-reduced state and local tax revenues might cause municipal bond downgrades or defaults to spike in the next few years. Either one of those events would reduce the values of any bond held by a fund.

Before I review what the Nuveen Quality Municipal Income Fund (NAD) provides investors, let’s cover some factors that would effect the municipal bond market. There probably are others that experts would include, but these are the ones I consider as “most” important.

Since bond prices move inversely to interest rates, any increase will cause a bond fund’s NAV to drop. By paying attention to a fund’s duration, the degree of loss can be measured. NAD has a leverage adjusted duration of 10.65. The shorter the duration the better when rates are raising. With current rates the lowest in years, you can see why this is a concern. 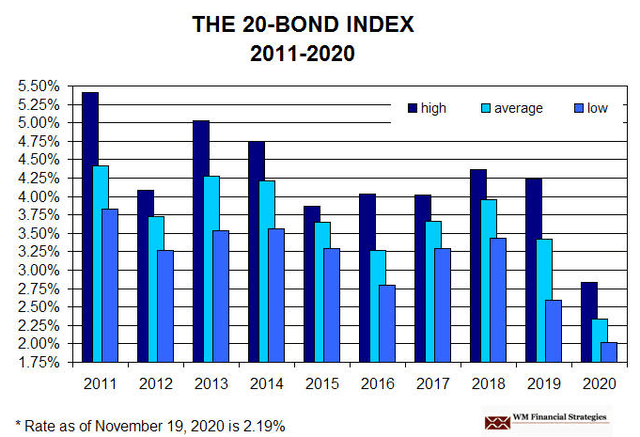 As you can see, muni rates, after raising for three years, have dropped over the last two years and are the lowest in over ten years. The next discussion also effects the interest rate required by the market for any particular bond.

Increase in downgrades or defaults 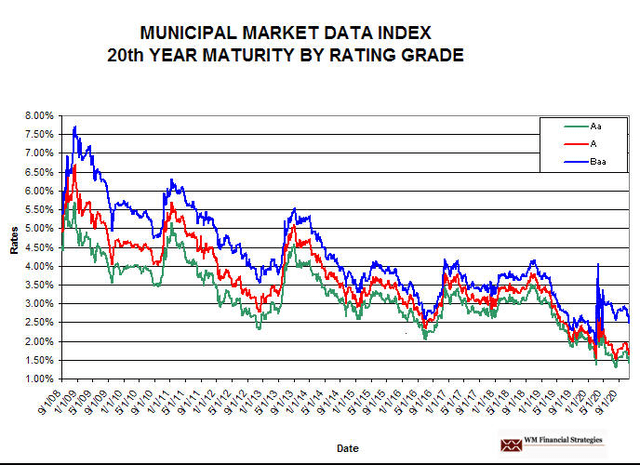 The above chart clearly indicates the default/downgrade risk has increased since the spring as investment grade rates are flat to lower, whereas “junk” bond rates have spiked. 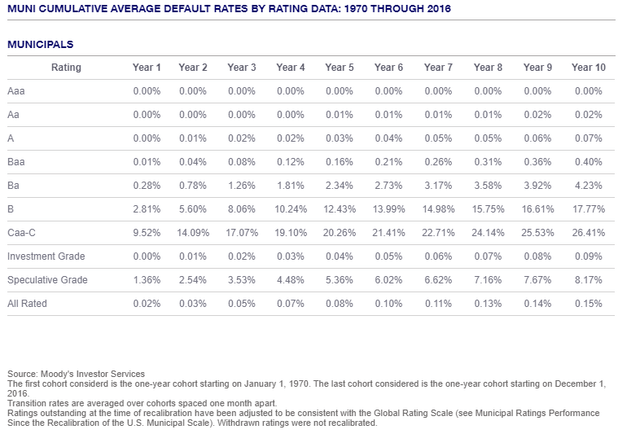 As the above chart shows, default risk is very low until you start investing in bonds rates Ba or lower. Later I will show the ratings distribution for NAD. I found an article explaining why muni bonds seldom default: Article. From late March through early May, there have already been almost 800 negative municipal rating actions by S&P alone, mostly in the form of “negative” outlook revisions and, to a lesser extent, downgrades. Any downgrade will negatively effect the bond’s price as it has to adjust to reflect the higher interest rate demanded with other similarly rated bonds. (Article)

Interest rates also effect the cost of the 36% leverage employed by NAD – the lower the better in this case. The Nuveen site says the cost of leveraging is 97bps.

Demand changes in the market 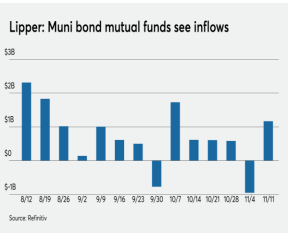 Since August, muni bond funds have seen inflows in all but two weeks. While NAD is a CEF and not effected by flows, ETFs are and must buy or sell bonds, so inflows will benefit all bond holders.

Nuveen describes their fund this way:

“The Fund seeks to provide current income exempt from regular federal income tax and to enhance portfolio value. The Fund invests in municipal securities that are exempt from federal income taxes. The Fund uses leverage. By investment policy, the Fund may invest up to 35% of its managed assets in municipal securities rated at the time of investment BBB and below or judged by the manager to be of comparable quality.” 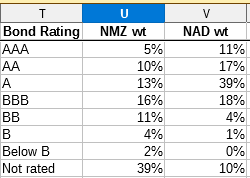 NAD has 67% of its AUM rated A or better, whereas the HY NMZ fund only has 28%, so for all that extra risk, NMZ is only adding 64bps in yield.

With 1,157 bonds, NAD is well diversified. With the constant drop in interest rates, bond prices have increased, resulting in their average bond now being worth 109% of Par. Logic tells me most of that would be in their bonds maturing farther out, so the passage of time should not materially effect NAV because of that. NAD currently is earning 104% of their distributions, another statistic any income investor should know. 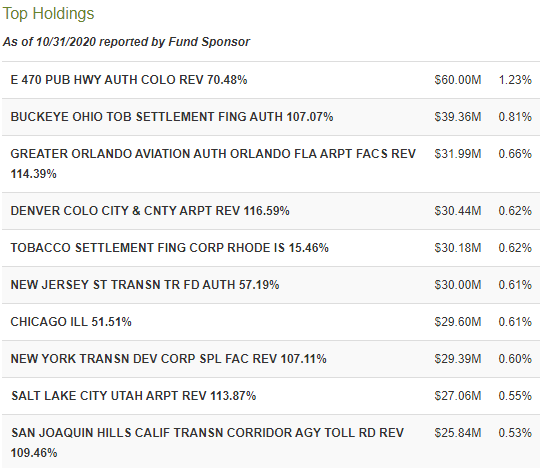 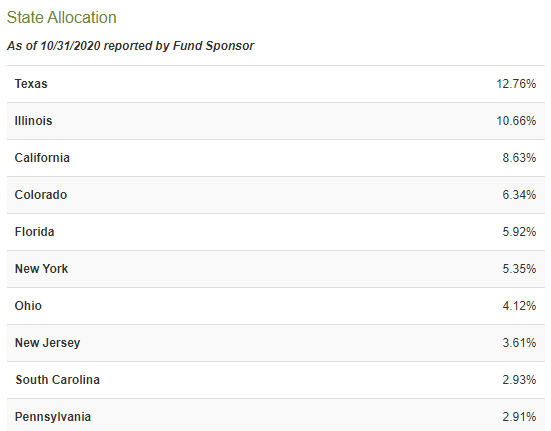 Source for both charts: cefconnect.com

I find it interesting that Illinois and New Jersey rank in the top states, but based on the ratings chart, the bonds held might be better rated debt than the state average. 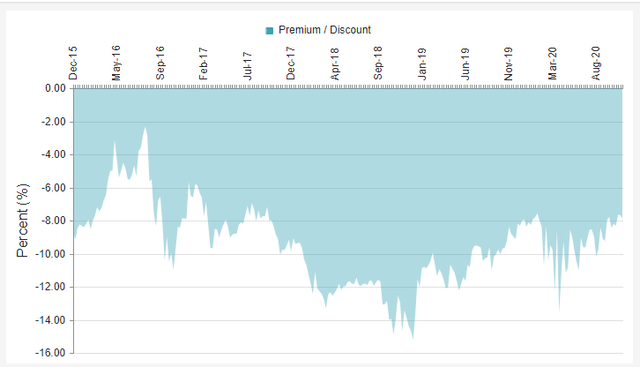 NAD consistently has sold at a discount and the current level is the smallest in the past three years, so investors shouldn’t expect extra ROI from a shrinking discount.

Since there are lots of choices, comparing a fund’s ROI to its peers should be done. As shown above, NAD has regularly provided a higher ROI.

As you can see, distributions have varied over time, drifting down as overall rates have declined since 2009, but they recently ticked up since last spring. What you did with those distributions would have effected your return as the below chart shows.

If you had reinvested all distributions, your original $10k investment would be worth $35k or $13.5k more than if you collected the distributions and spent them.

After an investor has decided they need more tax-free investments, they still have decisions to make:

Based on my analysis, these are the reason I rated NAD as Bullish:

If you appreciate articles of this nature, please mark it ‘liked’ and click the ‘Follow’ button above to be notified of my next submission. Thanks for reading.

Disclosure: I am/we are long NXR. I wrote this article myself, and it expresses my own opinions. I am not receiving compensation for it (other than from Seeking Alpha). I have no business relationship with any company whose stock is mentioned in this article.

$35 Million Condo On New York’s Upper West Side Is Ready For Its Close-Up
Stocks making the biggest moves after the bell: Nordstrom, Ethan Allen & more
Stocks making the biggest moves in the premarket: JPMorgan Chase, PNC Financial, Disney & more
Investors are looking for some clarity from the new earnings season, but likely won’t get it
A new activist takes on Exxon to reverse the oil giant’s underperformance