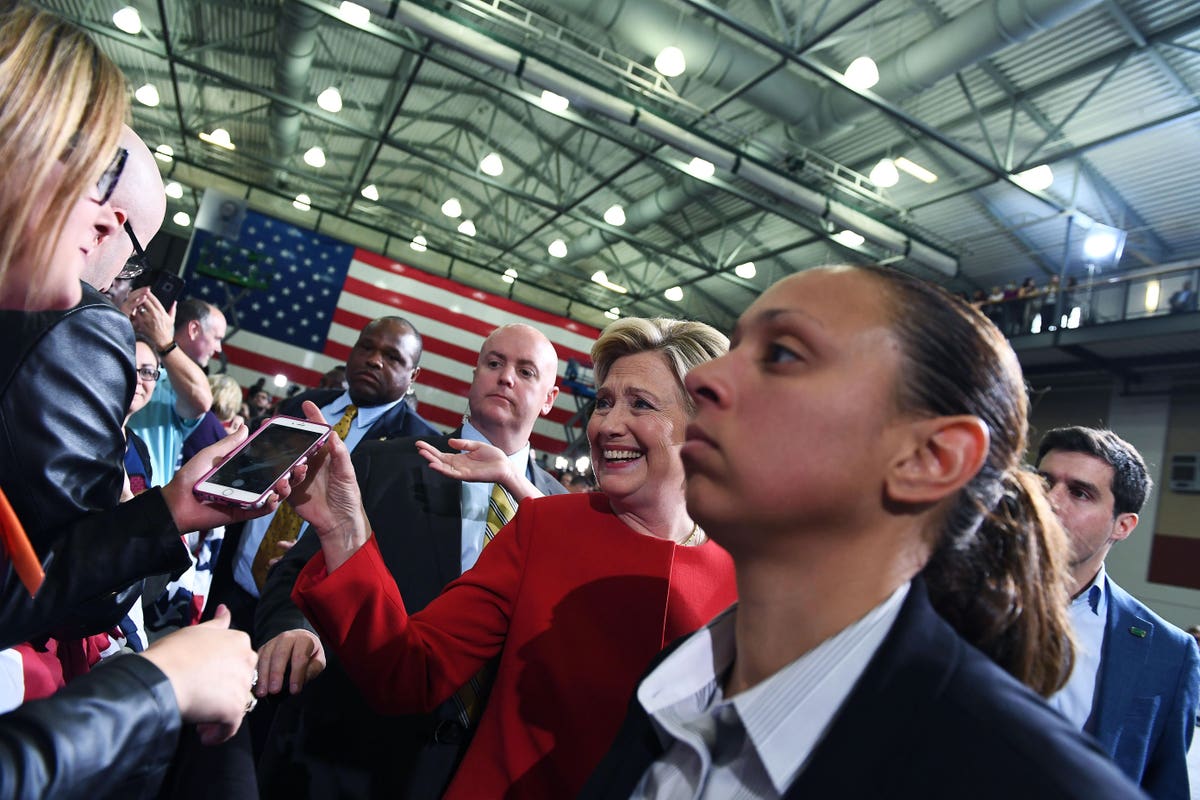 As the US prepares to choose a new President on November 8, passionate debate rages after three TV clashes between Hillary Clinton and Donald Trump. Now we have an FBI-email investigation to add to the mix. Whatever the outcome, change is coming and Americans need to act to shore-up their finances, if they haven’t already.

One wonders if anyone knows anything about this election race or the outcome anymore. The polls had recently shown Clinton with a slight lead over Trump a couple of weeks ago. But polls have been wrong and ultimately the result in the end analysis may come down to turnout and how the as yet undecided vote.

It had been swinging around since just before the first televised presidential debate between the Republican and Democrat candidates running for the White House, when Clinton held a 9% lead going in.

Trump’s campaign manager and strategist Kellyanne Conway managed to stabilize the ship in the aftermath. But by all accounts it’s estimated that 12%-20% of voters back in September were labelled as undecided.

There is no time for complacency. For investors it’s their worst enemy and with recent events this is no time to right off the Donald. In a major nationwide poll out today he edged ahead of Clinton by one percentage point in the ABC News/Washington Post tracking poll.

And, if Brexit teaches us anything it’s that polling data is not gospel. Failing though for investors and savers to act sooner rather than later could result in missing out on important opportunities on the investing front and hitting some avoidable pitfalls.

With the third US presidential debate now well behind us, markets are firmly focussed on the upcoming election. There have been some mixed results across currency and equity space.

The Mexican peso, for example, which has been something of a proxy trade against the perceived likelihood of a Trump win, reached a six-week high some 10 days ago. Its relative strength was linked to the market’s firm belief then that Clinton was a shoo-in for the White House.

But matters can turn quickly as evidenced by the FBI’s investigation into Clinton’s emails, which jolted her campaign. Eleven days before the 2016 presidential election, James Comey, FBI Director, delivered an October surprise by announcing that the bureau had discovered additional emails and were reviewing them to gauge whether they were related to their investigation into Clinton’s handling of classified information.

Gallery: Tips From 12 Money Experts On How To Invest This Election

Trump Moves Up As Volatility Returns

Now with just a week to go before the election, today’s moves in the market reflect a pretty sizeable shift in sentiment and a realization that this presidential race is far from over. The latest ABC poll that gave Trump a slight lead over Clinton has been the catalyst for some fairly significant risk-off moves. Before the FBI news broke Clinton had a 2-point lead over Trump according to another ABC poll.

Neil Wilson, a senior markets analyst at broker ETX Capital in London, which is regulated by the UK’s Financial Conduct Authority, commenting today said: “Our US election market is now giving Trump a roughly one in four chance of entering the White House – up from around one in eight just after the debates.”

The VIX, the so-called ‘gauge of fear’ that measures US equity market volatility, has now jumped to 19. It had languished at around the 13-level mark for some time lately as markets thought Clinton was a shoo-in.

Wilson added: “The rise in volatility corresponds with a sell-off on the S&P 500, which has just broken some fairly important support levels to trade at its lowest level since July. Markets are clearly worried about a Trump win, or at investors are de-risking to protect against major shocks and volatility around the vote.”

Given also the fact that the S&P 500 closed out October below its August 1 opening price is also being taken as “a strong signal that Trump should not be written off” according to Wilson.

Meanwhile, the Mexican peso, which is now the chief proxy trade for the US election, has dropped after the poll. It has extended losses after last week’s FBI-email investigation bombshell rocked support for Clinton. The USD/MXN currency pair is trading handsomely above 19, which is a month low for the peso. Suffice to say we can expect further volatility over the coming week.

On the equity indices front, the S&P 500 was about 1% off a key metric two Thursdays ago. This says that the incumbent party (Democrats) would win if the index of US stocks climbs between the start of August and end of October. And, at that point the S&P 500 was effectively saying Trump will win. It all makes one think.

Who’s Better For Your Investments?

Scott Tucker, a Chicago-based fiduciary investment advisor and founder of Scott Tucker Solutions Inc., commenting on who on balance – Trump or Clinton – would be better financially for Americans, says: “Different groups of Americans would benefit. Or, be harmed by either candidate and in different ways.”

The advisor, who specializes in retirement and income planning and passed the necessary exam to become an investment adviser representative (IAR) with SEC-registered firm Wealth Financial Advisory Services, adds: “Trump would be better for families who are trying to pass assets to the next generation tax-free, as he’d end the estate (‘death’) tax. Hillary would be worse for these families, as she would increase estate taxes.”

Tucker reveals that he recently met with a family this September, whose “estate taxes would double” under Hillary being elected.

“There are work-arounds to lessen the impact of estate taxes,” Tucker points out. “One way is to work with a fiduciary advisor, to use specially-designed life insurance to pay the estate taxes.”

Hillary is seen by Wall Street as “more of the same” says Tucker – the ‘status quo’ candidate, and would largely keep-on with President Obama’s policies.

US stockmarkets would be “least affected” by a Hillary Clinton victory according to the Chicago advisor. “Both US and international stock markets would be shocked by a Trump win, and would react badly, at least at first, due to concerns over his planned tariffs on imported goods,” he added.

Think here of a ‘Brexit’ type of shock. But if Trump wins, one can expect volatility for the US equities markets – and even for international stock markets.

Meanwhile, Hillary is seen as beneficial for companies that are currently having an easy time of things. “She is just more of the same and not expected to rock many boats,” Tucker posits.

As regards sensible investments for those coming up to retirement and things to consider in the forthcoming change in President, Tucker notes that what he sees most is people who have “only invested in stocks and bonds within their 401(k) plans and have no truly safe money.”

He says: “Bonds are not truly safe. So, more bonds would not be something that I would advise. Safe money options would include things such as fixed-index annuities, which operate like a pension.”

A downside though to fixed-index annuities is that they have early-withdrawal penalties, so it is prudent to consult with a fiduciary advisor before doing anything. And, it makes sense to some invest some – not all – of your money.

Generally speaking, an individual that is 50 years of age or older “should consider beginning to divest themselves, at least partially, of securities” according to Tucker.

As to which of the two candidates would enable you retire at the right age, Tucker ventures that Trump would be “disruptive to markets”. So, one think Trump is going to win, then advises Tucker “you would  hedge your bets…pulling some money out of the market.”

That said, neither candidate is going to make all your retirement concerns disappear.  Complacency should not be an option if you are serious about growing and protecting your wealth.

The best advice is to review your financial strategy to ensure the changes will be beneficial to your wealth. Investors should ensure that their portfolios are properly diversified and be aware of their tax liabilities and how they could change. But most importantly professional independent advice should be sought.

Tucker in Chicago argues: “Don’t let the election hysteria drive your decisions. But do meet with a fiduciary advisor so you can get a handle on your investments and retirement planning.”

The advisor regularly meets people who have one year to go before retirement. “That’s not too late, but it’s too late for me to do everything I could for them,” he says. Ideally it makes sense he says to see “folks at least 10 years” before retirement.

Even if you are nowhere near retirement age, it’s always better to plan now rather than to let life happen to you. This is especially pertinent given that America faces a looming retirement crisis in certain quarters and there are more changes expected in 2017 to social security. So don’t put your head in the sands – whatever the outcome of the US presidential election after next Tuesday.