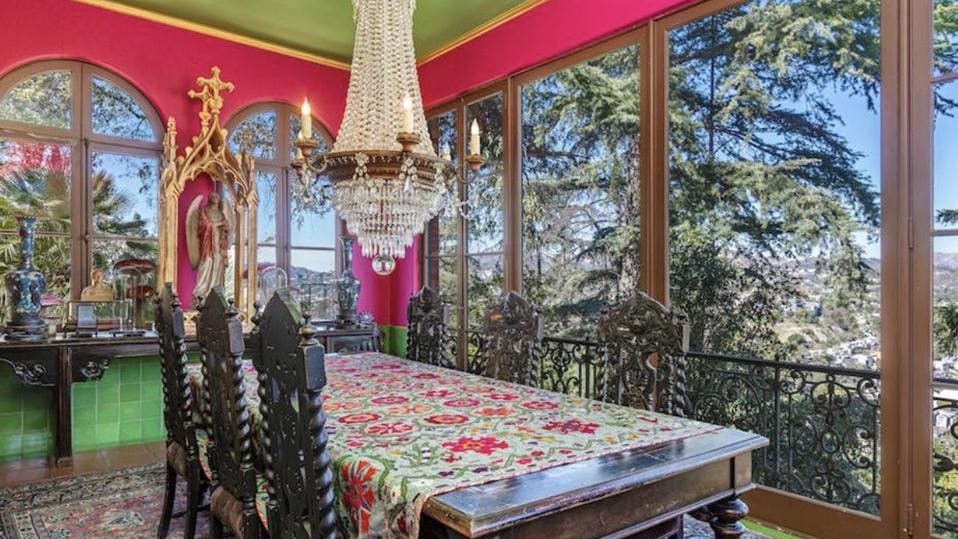 Los Angeles’ Silver Lake neighborhood isn’t usually known for homes with hidden cupboards where alcohol was stowed away during Prohibition. Nor is it known for asking prices in the tens of millions of dollars. But both those things are about to come true this week with the launch of The Paramour Estate.

This 18,000 square foot house has been a convent, girls boarding school, filming location and boutique hotel in between all the times it was a private home. Dana Hollister, designer to Hollywood elite, purchased the run-down property for $2.25 million in 1998 and set about returning the 100-year old main building and three guest houses to their original feel.

“The opulent gilded mirrors, crystal chandeliers, allegorical artwork, chinoiserie, taxidermy and silk upholstered settees…set a feeling of environmental submersion or time travel,” says Hollister as she describes the mammoth restoration process. “I removed a lot of Formica, linoleum, and red wall-to-wall carpeting to reveal the wood countertops and the walnut, travertine, and pink marble floors.” That’s when she also discovered the hidden cabinets where alcohol was conveniently stored during the Prohibition years.

Paramour entered the world in 1923 when heiress Daisy Canfield (daughter of oil magnate Charles A. Canfield) and her husband, silent film star Antonio Moreno, commissioned architect Robert Farquhar to design the home. Farquhar was one of the designers of the Pentagon, but was mostly known for many high-end homes in California, including the Owlwood Estate which recently sold for $88 million.

Sitting atop on of the highest promontories in the neighborhood, the Paramour Estate came on the market today with an asking price of $39.9 million. It is one of the largest parcels in Silver Lake at approximately four acres and certainly ranks as one of the most expensive listings in Silver Lake history since most of the high-end homes in this area typically don’t surpass two or three million.

Here’s a tour of the bold-colored interiors with custom decor.

This dual-chandeliered dining room has teal and copper tones.

The vaulted ceilings in the ballroom (below) are hand painted. “It was very fortunate that the property was a girl’s school and later a convent for so many decades because it was not subject to any dramatic alterations which would have changed its intrinsic beauty,” said Hollister.

A hallway brings in touches of Asian style decor.

One of the guest houses has a spiral staircase to the bedroom.

Another of the bedrooms has industrial-style French doors and dark beamed ceilings.

One example of how the many ornate fireplaces that have been preserved.

A Miro-inspired bathroom has penny tiled floor and gilded furnishings.

Outdoors the mosaic tile pool has been preserved.

And finally here’s a look at the property from above.

The Paramour Estate is listed with Sally Forster Jones of Compass.

As Competition For Top Real Estate Talent Heats Up, Employers Aren’t The Only Ones Being Hyper-Selective
Many older millennials are burdened by housing costs, and it could keep them from reaching other financial goals
Rocket Lab’s next launch will feature second booster recovery, aiming for reusability like SpaceX
AST SpaceMobile shares rise as the space SPAC stock begins trading on the Nasdaq
Lockheed Martin buys up to 58 launches over the next decade from rocket builder ABL Space