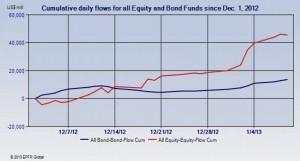 The retail investor is tip-toeing into the market this week as expected.

Last week, in an interview with Forbes, Allan Conway, a fund manager for Schroders in London told me that he expected the retailer to return to the market within the next few weeks, but that flow would not last for long. “Most of our flow is institutional. Our main emerging market retail fund is witnessing outflows so far this year,” he said.

The odd-lot investor, the industry term given to investors who buy small blocks of under 100 shares, are usually late to the party.  By the time they show up, the hosts are already running out of bubbly.

Regardless of the famed odd-lot theory in markets, the recent deal to stop the U.S. from falling over the fiscal cliff last week convinced investors of all stripes to jump in to equities.

Emerging market funds and global equity funds also posted weekly inflow records as investors continued the rotation out of bonds and cash and towards equities, a trend that started in earnest in December.

The market shouldn’t be too quick to call an end to the bond rally, however.  Bond and money market mutual fund flows hit a 9 week high of $6.54 billion while pure play money market funds took in another $21.8 billion. In fact, according to EPFR Global, net inflows into low yielding money market funds over the past 10 weeks is around $140 billion. The last time inflows over a comparable period were higher was Dec. 08-Feb. 09.

Athe country level dedicated Japan, China and Italy focused funds stood out while Russia funds posted their biggest inflow since early October. Meanwhile France focused equity funds recorded outflows for the 26th time in the 28 weeks since the start of the second half.

Flows into EPFR Global-tracked emerging market equity funds hit a record $7.39 billion during the week ending Jan. 9 as this fund group extended their longest inflow streak since a 29 week run ended in mid-December, 2010.  The more diversified global emerging markets equity funds accounted for over $5 billion of that total – also a record – while Latin America, Asia ex-Japan and Europe, Middle East and Africa (EMEA) funds took in between $94 million and $1.46 billion. Retail commitments climbed to a 61 week high. EMEA equities saw their best week since late September thanks to Russia and Turkey-bound investments. Forecasts of over 4 percent growth and declining inflation over the next two years have helped Turkey focused funds compile a seven week inflow streak while Russia equity funds posted inflows for only the second time in the past 15 weeks as oil prices climbed.

China equity funds continue to stand out among the Asia ex-Japan Country Fund groups, taking in another $492 million as their current inflow streak hit 18 weeks of positive flow.  Expectations that Chinese companies will regain some of their pricing power this year, optimism about U.S. demand and the further opening of Chinese capital markets to foreign central banks are among the current drivers for these funds. Higher than expected inflation hurt China’s equity markets on Friday, however.

In the core markets, Japan equity flow jumped to a 20 week high thanks to the new government’s $115 billion stimulus package. Actively managed funds recorded their biggest inflows since the third quarter of 2011.

U.S. equity also posted their biggest inflow in over a decade as retail commitments jumped to a 22 month high and funds managed for growth outperformed their value counterparts across all capitalizations for the second week running. Small cap growth funds turned in the best performance numbers for the week.

And European equity funds rounded out a solid week with investors largely opting for diversified exposure to the region ahead of the European Central Bank’s Jan. 10 meeting.

For sectors,  commodities funds ended in the red because of big redemptions in gold and precious metals funds.

Of the top 25 commodities funds in terms of attracting fresh money, however, 15 were diversified, five were gold funds, three were silvers funds and the remaining two specialize in copper and timber, EPFR Global said today.

Architect Alex Nerovnya Discusses Futuristic Compound Concept For L.A.’s Enchanted Hill
The Covid recovery still has a K shape
California answers investor calls for more climate risk disclosure
An Invested Teen Becomes One Of Ohio’s Youngest Homeowners With An Assist From A Harlem Globetrotter
Bitcoin Price Approaches $60K: What to Keep an Eye Out For