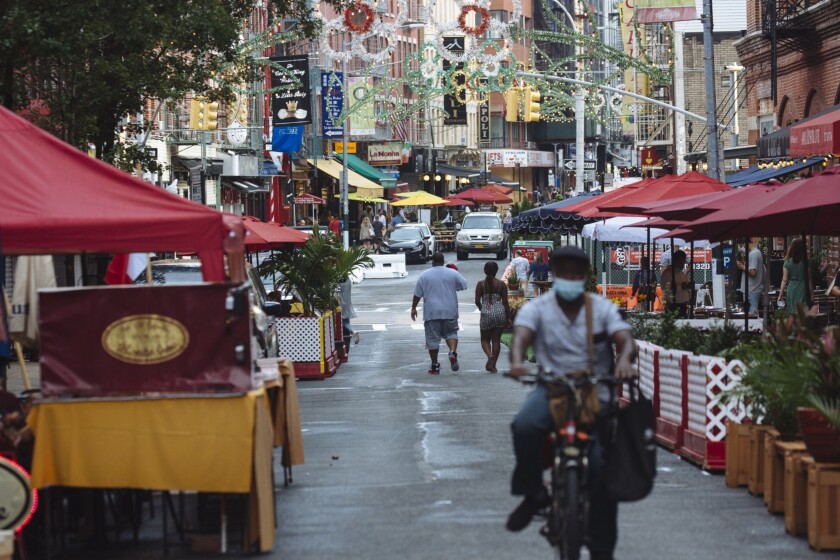 Congestion pricing, a Manhattan Greenway, open-streets programs and a plethora of other uses are all at play as New York weighs recrafting its streets amid its emergence from COVID-19.

“This is a long-term conversation that we and other cities are having, as to the use of the streets,” said Kathryn Wylde, president of the business organization Partnership for New York City.

Municipal budgets, both operating and capital, and economic-development funding could reflect this dynamic. It is resonating with think tanks, business leaders and bond analysts as well as New York mayoral candidates who are in the final stretch in advance of the June 22 primary.

According to a poll of New York, New Jersey and Connecticut residents by Regional Plan Association and Global Strategy Group, 52% of respondents cited social isolation as the largest source of household stress during the pandemic, dwarfing the second-highest category, job worries.

The city is also bracing for a return of tourists. NYC & Co., the city’s marketing wing, has launched a $25 million tourism campaign.

State Comptroller Thomas DiNapoli said Wednesday that visitor spending dropped by 73% in 2020, to $13 billion from $47.4 billion, and tourism-related tax revenues plunged by $1.2 billion. In his report, “Reigniting the Return,” DiNapoli called on the city to focus beyond vaccinations and reopening.

Proposals include building infrastructure and systems that flexibly adhere to health and safety guidelines, including the expansion of public space for tourism activities. The 376,800 tourist-related jobs represent nearly 10% of all private-sector employment.

The pending arrival of congestion pricing in Manhattan reflects a push-pull over mass transit and the role of private vehicles, which municipal bond analyst Joseph Krist said is by itself “a debate characterized by over-the-top passions and heated rhetoric.”

Congestion pricing will involve fees to vehicles entering and remaining in Manhattan at 60th Street or below. The federal government, which kick-started the stalled initiative under President Biden, has advised the MTA that it should conduct an environmental assessment of the project, which consumes less review time than a full environmental impact statement.

Through congestion pricing, MTA officials estimate that they can raise up to $15 billion through bonding, or roughly 30% of its five-year capital program.

Transit advocacy groups, including the Permanent Citizens Advisory Committee to the MTA and Reinvent Albany, are calling on MTA officials to staff its Traffic Mobility Review Board, baked into the legislation that created congestion pricing, and to hold open meetings.

Design and procurement is under way with construction scheduled to start in 2023.

De Blasio called the megaproject “something that has not been available to people for decades and decades, the ability to go all around Manhattan on foot or on a bike on a greenway.”

The so-called open streets initiatives, by contrast, received but $4 million.

Streets are home not only to transit and private cars, but also to app-based ride-share delivery services such as Uber and Lyft, the CitiBike bicycle rental program, protests, scooters, homeless people and a swarm of delivery trucks. Bike groups are pushing for wider lanes and restaurants want outdoor expansion as the weather warms.

“I think that COVID has definitely accelerated the momentum of making streets more available for people,” Wylde said on a Bond Buyer video. “We have restaurants now functioning semi-permanently in the streets because they needed open air that was at first done for a health reason and it was done when the streets were empty, but there’s now a full intention to keep that going.

“We’ve got a lot of activity that depends on the street that’s increasing, and I think it’s inevitable.”

Wylde emphasized the need for a clean, well-connected and safe mass-transit system.

The city could also monetize streets in ways beyond congestion pricing, said Nicole Gelinas, a senior fellow with the Manhattan Institute for Policy Research.

She also said the city could eliminate employee parking placards, which allow public-sector workers to park free at legal spots and are often used to park in illegal spots and avoid tickets.

“Without parking placards, the city would effectively require its workers to pay for municipal or private parking, as private-sector employees do,” she said. Q-code or other technology could monitor parking workers’ usage to ensure that employees are parking only to perform work duties.

Gelinas also called on the next mayor to devote capital funding to a system of retractable posts to block off streets or lanes to car and truck traffic as needed, as opposed to “junky barriers.”

The city primary, said Krist, has provided a platform for a potpourri of ideas for changing daily street activity patterns, notably in Manhattan.

“On one side are people who for a variety of valid reasons truly need a private vehicle. This is especially true given the reality of the inaccessibility of the city mass transit system,” Krist said. “Given the significant role of Manhattan as a medical center, this will be the case for a long time.

“On the other side are what can fairly be characterized as the anti-car crowd. They would flat-out ban individual private vehicles and put everyone on a bicycle through their entire life span.”

“They want significant capital spending on bike infrastructure and to do it at the expense of cars. But they want to fund mass transit through congestion pricing. You need cars to pay the fee so if that revenue does not materialize, how to pay for the infrastructure for other modes?”